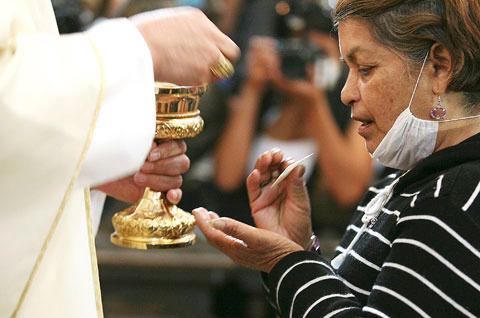 Getting the flu wasn’t on Rebecca Greene’s agenda for her very first month of college. But in early September, the 18-year-old freshman at Cornell University began experiencing severe flu-like symptoms that lasted for more than a week.

"I kind of had a headache, was pretty much coughing uncontrollably and was really, really tired. My friends bought me chicken noodle soup," recalled Greene, an Albany native who is studying agriculture.

She was far from alone with those symptoms on the Ithaca Ivy League campus. Cornell was catapulted into the national news after one student, 20-year-old Warren J. Schor, died Sept. 11 from complications triggered by the H1N1, or swine flu, virus. His was the most severe outcome of more than 500 flu cases reported by university officials in September — in addition to a probably large number of unreported cases. Because the outbreak occurred before the regular winter flu season, it has been linked to the H1N1 strain.

Though classes weren’t suspended, school officials issued campuswide health precautions that extended to the Cornell Catholic Community, where Greene is a participant in the Rite of Christian Initiation of Adults. Beginning Sept. 6, Father Daniel McMullin, the community’s director, initiated several adjustments at daily and Sunday Masses: offering Communion in the form of host alone; stipulating that the host be placed on the hand only and not the tongue; suspending the custom of holding hands during the Our Father as well as hand-shaking and other bodily contact during the sign of peace; and imploring worshipers to stay home if they don’t feel well. In addition, the university placed hand sanitizers at chapel entrances and made them available for liturgical ministers.

The H1N1 flu, to which young adults are particularly vulnerable, has reportedly surfaced to lesser degrees at other colleges within the Rochester Diocese. Though this flu strain has not become widespread in the general population, the Centers for Disease Control and Prevention warns that the threat of an H1N1 epidemic is very real.

Thus, as flu season draws near, parishes in the diocese are considering liturgical procedures similar to those undertaken at Cornell. Whereas this may mean the disruption of some rituals, parish leaders are appealing to worshipers’ common sense in the name of the common good. In fact, Father Gary Tyman contends that people who do so are living examples of their faith.

"Our Christian charitable concern for others means that we must practice good hygiene and be aware of our own health, so as not to endanger the health of others," Father Tyman, sacramental minister of Rochester’s St. Anne and Brighton’s Our Lady of Lourdes parishes, noted in a Sept. 13 bulletin article.

In September, diocesan officials issued advisories to parishes, other faith communities and Catholic schools regarding the possibility of an early and possibly severe season for both H1N1 and seasonal flu. The notices cited information provided by the U.S. Conference of Catholic Bishops, the CDC and local health departments. (Details may be found at http://www.dor.org/commun/flu.asp)

To address concerns of worshipers who feel ill or vulnerable around others who might be sick, the diocesan advisory offered several suggestions to lessen the chances of germ transmittal. Among them are receiving Communion in the hand and bypassing the chalice even when it’s made available; refraining from holding hands during the Our Father; replacing handshakes during the sign of peace with a smile or bow; and staying home from Mass when sick.

To augment the liturgical alternatives, numerous parishes are providing hand sanitizer at church entrances and in vestries for priests, deacons and extraordinary ministers of holy Communion.

Ministers are not the only ones involved in preventing the spread of disease. "Everyone has a part to play," Father Tyman noted Sept. 13 in urging worshipers also to wash their hands and/or use sanitizer before coming to church. Meanwhile, Father Father Edward Palumbos, pastor of Fairport’s Church of the Assumption, suggested that people sneeze or cough into their sleeves rather than into their hands.

At this point diocesan parishes have generally only issued suggestions, rather than edicts, regarding Mass procedures. Father Steve Lape, pastor of St. Jerome Parish in East Rochester, for one, said that "since things haven’t dramatically changed for the worse with the flu situation yet, we haven’t changed any of our liturgical practices as a whole, although we’ll keep monitoring the situation."

For many Catholics, following practical health steps is no easy task when it comes to altering deeply ingrained liturgical customs — in fact, some may feel they’re not fulfilling their obligations. However, church law offers a fair amount of flexibility regarding such perceived conflicts.

In 1977 Pope Paul VI approved the U.S. bishops’ request for Communion to be issued in the hand, provided that the traditional practice of receiving on the tongue would remain an option for the communicant. And since 1978, the distribution of Communion under the form of wine as well as bread has been permitted by the Vatican in all U.S. dioceses. The Catechism of the Catholic Church, No. 1390, states that Communion is "more complete when given under both kinds," but that even if a communicant doesn’t take the cup, "since Christ is sacramentally present under each of the species, communion under the species of bread alone makes it possible to receive all the fruit of Eucharistic grace."

Perhaps the toughest choice for worshipers is deciding whether to forego Sunday Mass when ill. However, the Catholic Church makes clear that being sick removes this obligation without the threat of sin. The Code of Canon Law, No. 1245, gives pastoral leaders the right to grant dispensation of Sunday obligation; and the Catechism of the Catholic Church, No. 2181, states that "the faithful are obliged to participate in the Eucharist on days of obligation, unless excused for a serious reason (for example, illness, the care of infants) or dispensed by their own pastor.""

On the other hand, Father Palumbos doesn’t want parishioners to become so overcautious about attending Mass that they avoid attending church even when it’s safe to do so.

"Please don’t stay away from the Bread of Life out of fear. Jesus is stronger than the flu! Use your common sense and trust him," Father Palumbos wrote in his Oct. 25 bulletin.

Father Bausch, for one, expressed confidence that his flock would take the proper health precautions.

"I truly believe that we are dealing with intelligent people who understand what could happen if they do not use common sense," he said.