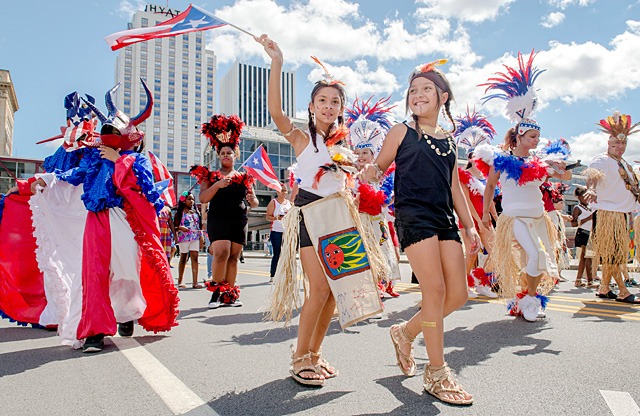 ROCHESTER — Miss Puerto Rico of Rochester stood on stage with a flowing, red-and-white-striped skirt, ready to dance to a blend of salsa and bomba and represent the diversity of the island first inhabited by the Taino Indians.

Zoe Ferraro’s dance helped kick off the 46th-annual Puerto Rican Festival on Aug. 21 at Frontier Field under sunny skies and warm temperatures that lasted throughout the three-day festival. The event also included performances from national and international singers and music groups as well as dance and music from local groups, boxing, a domino tournament, and the sixth-annual Staff Sgt. Javier Ortiz Memorial 5K race and walk.

Alberto Aldama of Cuba came out to the festival for the first time even though he has lived in Rochester for the past three years, he said.

"I enjoy the festival … sharing with all the people of all races," Aldama added.

Spectators along the 11th-annual Puerto Rican Parade route also expressed similar feelings of pride about sharing the Latino culture as well as having the chance to meet up with old friends during the festival weekend. Many of them stood with Puerto Rico flags waving or draped around their shoulders.

"All Latinos get together and (are) united, I think that is very special, " said Gloria Meléndez of Greece, who attends the parade and festival every year with family and friends. "And to see the diversity, I think it’s very important. Not only Latinos, all different kinds of people come."