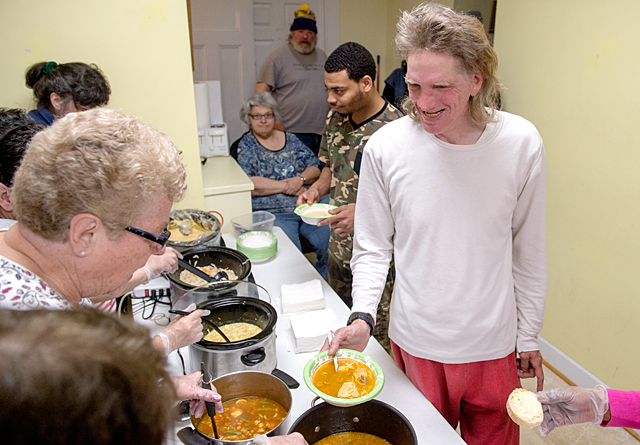 For a homeless veteran, it was a godsend.

For a young woman escaping domestic violence, it provided sanctuary.

They were two of the more than 150 residents who sought refuge this winter at the REACH (Rochester Emergency Action Committee for the Homeless) shelter located in the former Corpus Christi rectory on Rochester’s Prince Street.

According to its director, Marc Leomard, the shelter has been a success. "We’ve helped people to put an era of their life behind them," he said.

The facility operated at near or full capacity since opening its doors on Dec. 1, 2015. Leonard said the three-story building offered refuge to men and a few women, proving that a shelter can house both genders in a safe, respectful environment.

On March 21, the shelter was housing 31 men and nine women. Leonard said the total occupancy exceeded the terms of the shelter’s lease with St. Frances Xavier Cabrini Parish but was within fire code, with a few people sleeping in sleeping bags on the living room floor.

Community groups and volunteers from several area churches prepared and served dinner at the shelter every day, noted Leonard.

"The meals catered have been a good way to involve people who are part of the outside community and demonstrated how important broader community support is in helping people who are sheltered," he said.

Thanks to a warmer than expected winter, the REACH shelter shifted its mission from keeping as many people as possible out of the cold to helping many of its guests find more permanent housing, Leonard said. During its planning stages, organizers realized the REACH shelter could not be the next Sanctuary Village, which had granted people entry with no questions asked. Operating in a warehouse on Canal Street, Sanctuary Village had taken the place of a tent city that formed during the winter of 2014 under the Frederick Douglass-Susan B. Anthony bridge until city officials cleared it out.

"One of weaknesses of Sanctuary Village was a lack of case management and social workers," noted Kelly Finnegan, a social worker at House of Mercy and president of REACH’s citizens advisory board. "We made a point of having that for REACH."

About a third of the guests served by the REACH shelter found some form of permanent housing in the city, according to Father Daniel Condon, chancellor of the Diocese of Rochester, which approved having a shelter at SFXC last fall. He said city and county officials were helpful in securing this housing.

"I think it went very well," Father Condon told El Mensajero via email about REACH. "I think they were well supported by St. Frances Xavier Cabrini and other parishes and community groups."

Finnigan said one of REACH’s strengths has been having staff available to assist residents every day. Staff members included social workers, licensed mental-health counselors, and "an army of volunteers" from area churches and organizations including psychiatric nurses and University of Rochester Medical Center residents, Leonard noted.

Because of such support, the shelter was able to help many of its guests connect with resources in the community and find apartments, largely through a Rochester Housing Authority program, he said.

Other people the shelter tried to help will probably be back in the shelter system next winter, due to mental health issues or resistance to being helped, Leonard said. They likely will stay outdoors in the warmer months and find refuge at the new House of Mercy on Otis Street, Finnegan and Leonard said. Work is underway at the new site, which is slated to open Nov. 1, Finnegan noted.

"The new House of Mercy is likely to be friendly with people living with those issues, to their credit and our discredit," Leonard said.

As a recovering alcoholic and drug user, José González said he knows about dealing with such difficult issues. After trying to make it in Buffalo for two years, he said he moved back to Rochester in January, and staff at St. Joseph House of Hospitality referred him to the REACH shelter.

Social workers there connected him with a housing-assistance program and a case worker at the Monroe County Department of Social Services, he said.

The shelter "has been a great option for people," González said. "Personally, they have given me hope. … I see the light at the end of the tunnel."

The shelter gave Dan, a homeless veteran, a place to lay his head. He had lost his spot at another shelter for drinking a beer in violation of that shelter’s zero-tolerance policy, added Dan, who did not want to give his last name.

A friend referred him to the REACH shelter, where staff helped him find an apartment and a job.

The shelter also helped Andrea, a 20-year-old Syracuse native, escape domestic violence. She said her former boyfriend quit his job to keep her by his side, and the couple was living on the streets last year.

Andrea, who also asked that her last name not be used, connected with a social worker from the REACH shelter who brought her to stay there.

With a job interview lined up and an apartment in the works, Andrea said she is also feeling hopeful.

"They actually do help people here," she said. "It’s a slow process. You kind of have to take it day by day. … I hope I get the job, which will help everything fall into place."