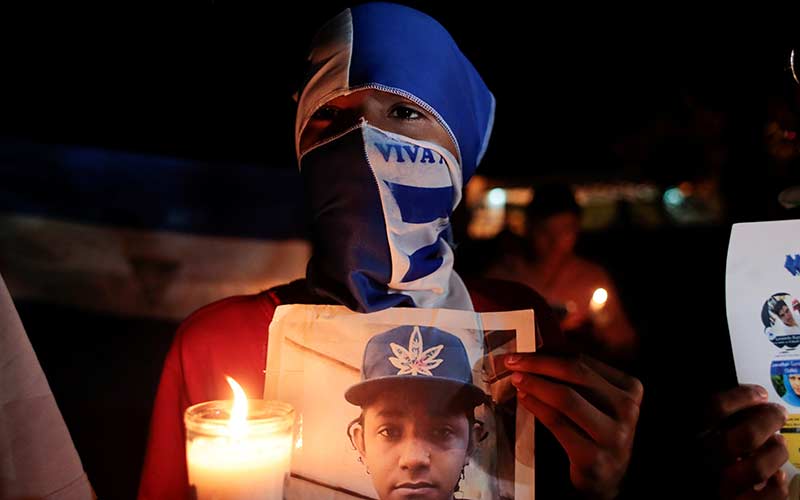 A masked demonstrator takes part in a candlelight vigil for the political prisoners and victims in the protests against Nicaraguan President Daniel Ortega's government at the Metropolitan Cathedral in Managua Oct. 3, 2019. (CNS photo by Oswaldo Rivas/Reuters)

Exiled Nicaraguan Bishop Silvio José Báez said he is certain Pope Francis is working behind the scenes to help resolve “the cruel and unjust situation of the political prisoners in Nicaragua.”

In an interview with the Nicaraguan media outlet Confidencial, Bishop Báez said he spoke about the prisoners’ situation when he met with the pope in November.

“I brought him the names of the recent prisoners and a written summary of the unjust and cruel situation they were being subjected to,” said Bishop Baez, auxiliary bishop of Managua, who has been in exile for three years.

“I begged him to please do something — even if it was in a discreet and silent way, but that in his heart as a merciful pastor, our political prisoners would find a place,” Bishop Baez said in the interview with Nicaraguan journalist Carlos F. Chamorro. “I am sure that the pope did something and I think he continues doing something — perhaps not publicly, but something is being done from the Holy See.”

Bishop Baez’s comments were published April 10 in a wide-ranging interview that touched on his exile, the pope’s perceived silence on Nicaragua and the church’s role in facing the country’s increasingly despotic president.

The timing coincided with the third anniversary of Bishop Baez’s departure from Nicaragua, which he left in April 2019 at the instructions of Pope Francis — who, according to the bishop, told him, “I don’t want another bishop martyr in Central America.”

“I left Nicaragua crying,” he said of his exile. “And I have spent these three long years in exile with feelings of nostalgia and pain for not being physically in the midst of my people.”

Bishop Baez has been outspoken on Nicaragua’s slide into tyrannical rule under President Daniel Ortega.

Church leaders in Nicaragua have worked — often fruitlessly — to find solutions. They facilitated a national dialogue after protests in 2018 demanded Ortega’s ouster. Parishes provided spiritual support for protesters and a place to seek shelter from police and paramilitaries — and later were besieged for assisting the families of political prisoners.

In his Easter 2019 message, delivered shortly before leaving, Bishop Baez spoke of a “crucified people with the hope of resurrection.”

He repeated those sentiments, telling Confidencial, “I can say from the heart to the people of Nicaragua that just as Jesus Christ, crucified by the powers of the world, was resurrected by God to never-ending life, the crucified peoples, sooner or later, are also resurrected.”

Bishop Baez has spent much of his exile in Florida. He teaches Old Testament classes at the St. Vincent de Paul Regional Seminary in Boynton Beach. On Sundays, he celebrates Mass at St. Agatha Parish in Miami, which has become a welcoming center for Nicaraguans arriving in the United States. His homilies often speak to topics back in Nicaragua, where his words are spread on social media and by the country’s beleaguered independent media outlets.

“The pope asked me in November not to stop preaching in St. Agatha every Sunday, as I had been doing,” he told Confidencial, “and that I don’t abandon my people.”

The situation has been dire in Nicaragua. Ortega won rigged elections in November 2021 after disqualifying and imprisoning his main political rivals. The regime continues to hold more than 170 political prisoners — often in deplorable conditions — according to Bishop Baez.

“There is not a single day in my life that I do not remember them, pray for them and raise my voice demanding their release,” Bishop Baez told Confidencial.

“We all know that they are innocent, that the trials are a total farce and that the situation and conditions in which they find themselves are inhuman and cruel.”

The Ortega regime recently expelled the Vatican’s ambassador to Nicaragua, Archbishop Waldemar Stanislaw Sommertag, whom critics faulted for not speaking out about abuses in the country, but who worked behind the scenes to win the release of political prisoners.

Bishop Baez offered little insight on the expulsion, saying it was a “diplomatic crisis” and that “prophecy and diplomacy are two different things.”

Still, he said: “The pope was surprised. He showed his pain and also surprise because I think he was not sufficiently informed” on the situation in Nicaragua.