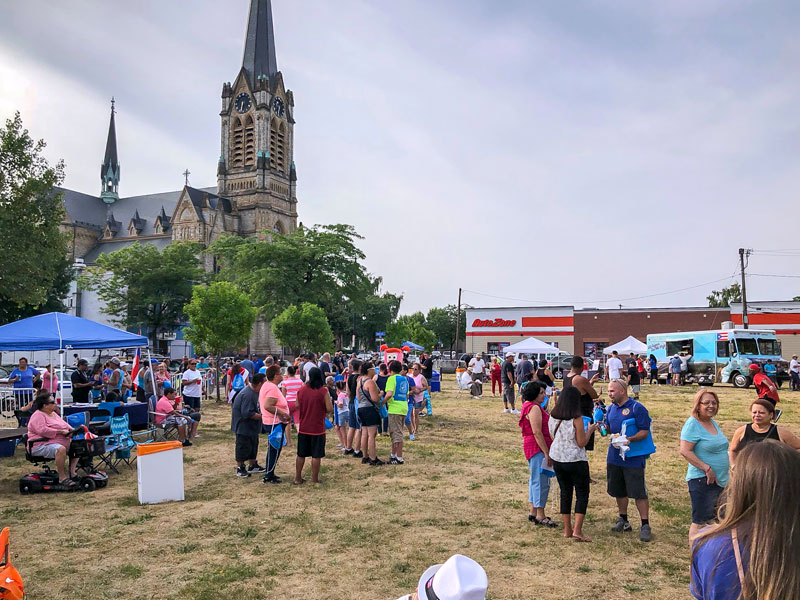 A Market Day at the International Plaza event was hosted by the Ibero American Action League July 12, 2018 to showcase potential for the plaza area. (Photo courtesy of Ibero)

After more than 40 years of discussion, a plan to create a Latin urban village in the neighborhood of northeast Rochester is moving closer to fruition.

The El Camino Revitalization Plan, a partnership between the Ibero-American Development Corp. and the City of Rochester, aims to clean up and redesign an area of northeast Rochester with an emphasis on the Clinton Avenue corridor, said Miguel Meléndez, director of special projects at IADC.

Created between April 2015 and August 2016, the revitalization plan comprises several projects to clean up and upgrade the northeast neighborhood, noted Meléndez, who has been involved in the project since 2016.

At the end of last year, the City of Rochester received $2 million in grants and donations to construct one of the plan’s components, a public gathering space called the International Plaza at La Marketa. The plaza will include such features as a stage for live music and booths for small businesses. Since its concept is rooted in the Hispanic cultural norm of connecting churches to a public plaza, Meléndez said La Marketa will be located on North Clinton Avenue near St. Michael Church.

Other components of the revitalization plan include redesigning Don Samuel Torres Park at the corner of North Clinton Avenue and Oakman Street, and the construction of Pueblo Nuevo, a complex of affordable housing that will surround the plaza. The property for Pueblo Nuevo already has been purchased, and a proposal is being prepared to submit for approval from New York state to assure compliance with building standards and codes, Meléndez said.

During a public meeting on Dec. 19, IADC presented a rendering of La Marketa that was created by the Rochester architectural firm LaBella Associates. Feedback on the design gathered from participants during the meeting will be incorporated into the final La Marketa plan. Once the design is finalized, the city will put out a bid for contractors to build the plaza, Meléndez said.

Ida Pérez, director of Children and Family Stability Services at Ibero-American Action League, said she is glad the revitalization project is finally coming to fruition and is particularly pleased with the plan’s proposed upgrade to Don Samuel Torres Park. Pérez, who resides on nearby Scrantom Street, said the park currently is not ideal for family use because it lacks shade trees and has been the site of drug activity. As a result, Pérez said she goes to Seneca Park but would prefer just to walk down the street to Don Samuel Torres Park instead.

Proposed improvements to the park, a preliminary design and a budget for the work were presented during a March 7 public meeting at the Salvation Army Temple Corps in Rochester. Prior to the meeting, IADC had compiled a list of ideas for the park and submitted them to Daniele Lyman-Torres, commissioner of the city’s Department of Recreation, who is working with the IADC on the El Camino project, said Meléndez. Renovations to the park — including the addition of 24-hour lighting to discourage drug activity, trees to provide shade, a basketball court, fencing around the park and a gated entrance that will be locked at night for security purposes — are set to begin next spring, Lyman-Torres said during the March 7 meeting.

Pérez said she feels the whole area of northeast Rochester has been neglected for a long time and hopes efforts outlined in the El Camino Revitalization Plan will give the area a different look and feel.

“It’s all about trying to rebuild the neighborhood,” Meléndez said.