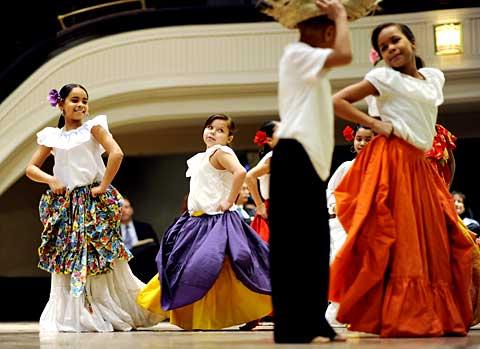 ROCHESTER — For many of the parents who have chosen to enroll their children in the Eugenio Maria de Hostos Charter School, its greatest draw is the dual-language program for its youngest students — even for non-Hispanic families.

"It’s unordinary," Telena Banks said of her two daughters’ bilingual skills. "A lot of black people don’t speak Spanish even though they (Hispanics) are the second largest culture here. … I wish I could learn."

But the charter school has not only given her daughters’ a linguistic edge, Banks noted during the school’s 10th-anniversay celebration Jan. 27 at Hochstein School of Music and Dance, one of its partners. The charter school’s longer school day, individualized instruction and teacher excellence have helped them succeed academically, she added.

Banks’ oldest daughter, now 16, has achieved top grades at Wilson High School since moving up from the charter school and currently has a 3.69 grade-point average.

"The teachers are sincerely concerned about the kids," Banks said. "Kids get that extra time and a lot of support within the school. … There’s a lot of parent communication. Any time anything is going on, I know about it."

While waiting to watch her child’s second-grade presentation of the school namesake’s work in Argentina, Marisol Reyes concurred on the school’s excellent instruction, especially in language development.

"I want him to be fluent in Spanish and English," Reyes said of her 7-year-old son, Giovanni Meléndez. "It’s my number one priority."

And the dual-language model — which is employed from kindergarten to second grade with all content taught in both English and Spanish — is ideal, she added.

"Regular bilingual (instruction) can have a child stay behind in school," she said. "This doesn’t do that."

The school started out in 1999 with just the primary grades and 120 students, Miriam Vázquez, who worked as principal until last summer, said during an interview Jan. 26. A grade was added every year for several years, she added. The students move into a more traditional bilingual program in third grade with non-language instruction content taught in English, she said, but proficiency in Spanish and English is still maintained.

The model has proven successful, as 99 percent of the schools students in grades 3 through 6 passed the state math achievement test last year as compared to 53 percent in 2006, and 81 percent passed the English language-arts exam as opposed to 51 percent in 2006, according to information provided by Principal Jeff Halsdorfer.

"Those are pretty phenomenal results for a school that has a 90-percent poverty rate," Miriam Vázquez remarked.

The school’s mission of preparing students to exceed state academic standards as well as to be fluent in two languages has proven to be an effective model, said Julio Vázquez, the school’s chief executive officer.

"And we came up with a vision that if a child cannot learn the way we teach, we will teach the way that child can learn," he noted.

An application has been filed with the state to renew its charter and add seventh and eighth grades consecutively beginning this fall, and school officials are expecting that to be approved, he said. The school has to renew its charter every five years and receives funding from the Rochester City School District.

The students’ day begins with breakfast, which is available every day at 8 a.m., Miriam Vázquez noted. The school day begins a half hour later and continues through 5 p.m. with enrichment and extracurricular services provided during the latter part of the day, she said.

As one of the original planners of the school, Julio Vázquez said that he knew a high-quality bilingual school could be successful. He recounted the charter school’s history during the anniversary event. He and Eugenio Marlin, executive director of Ibero-American Development Corp., initially looked at the idea as an extension of Ibero-American Action League’s children services.

In 1997 Julio Vázquez, who at the time was president of Ibero-American Action League, had experienced an epiphany after hearing about a bilingual charter school in Lawrence, Mass., during a National Puerto Rican Coalition conference.

"I immediately realized our dreams could become a reality," he said.

He also saw the school as an important aspect of Ibero’s advocacy role in the Latino community.

"We wanted to show how bilingual education could work and how a good program could increase learning for kids … and give parents an alternative," he added.

He asked his sister, Miriam Vázquez, to work on creating a Rochester model with help from community partners that remain connected to the school to this day, Hochstein as well as the Greater Rochester YMCA, where students currently go for physical-education classes. A planning group for the school developed a proposal and waited for the state to pass a charter school law, which the Legislature did in 1999, Julio Vázquez said.

"We submitted the proposal and the rest is history," he added.

When Julio Vázquez first approached Peggy Quackenbush, Hochstein’s president and chief executive officer, about including her school in the planning for the charter school, she said that she considered it a good opportunity for Hochstein faculty to provide music instruction to the charter school’s students. The school also has provided in-kind support including helping develop a music curriculum and provided music instruction, she added.

"We welcomed the idea of collaborating with a school in this way," Quackenbush said in an e-mail. "We were also pleased that the academic leaders of the school recognized the importance of music instruction for all its students. I chose to serve on the board because I was interested in supporting the success of the endeavor with my volunteer time, and because I was impressed with the vision and mission of the school, and with the commitment and dedication of its leaders."

The school, which is located on Clifford Avenue, expanded to a second location on Joseph Avenue to house grades 3 through 6. Staff includes 21 teachers and 14 paraprofessionals for its 325 students, Miriam Vázquez said.

The namesake of the school provides an excellent role model for students, she noted: Hostos is known as "el educador de America," said Julio Vázquez. The school’s anniversary celebration coincided with the month of Hostos’ birthday and each class presentation at the anniversary event spoke of his accomplishments in expanding civil rights and education opportunities in such countries as Cuba, Argentina, Chile and his native Puerto Rico.

"He exemplified what we want our students to achieve," Julio Vázquez said. "He was a scholar and an activist for education and justice for Latin America and the Caribbean."