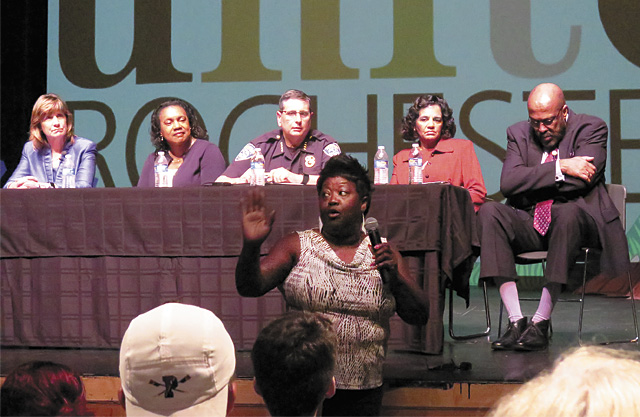 ROCHESTER — A panel on race relations raised some concerns about the need to improve relationships among community members and law enforcement.

The Unite Rochester Community Response Panel held a forum July 25 to consider how the Rochester community is responding to racial tensions locally. The forum was moderated by Julie Philipp, senior engagement editor for the Democrat and Chronicle.

"These times may be challenging," he said of recent fatal incidents that have led to the Black Lives Matter movement. "But they are by no stretch of the imagination a crisis that this city, state or nation cannot solve. … In many ways, they are about to be the best of times. I refuse to be anything but an optimist."

Other panelists discussed how a law enforcement approach from a few decades ago — when officers lived in and walked the streets they patrolled — may be an idea worth considering again.

"They knew families and stopped for barbecues," said Walker-Cowart. "People are looking forward to and believe we can get back to those times."

Rochester Police Chief Michael Ciminelli said a residency requirement for police officers would require a change in the state law. He also noted that the police department has used its recruitment process to try and diversify its force as well as offer cultural training. A challenge remains with young officers who don’t have personal connections to the civil rights movement, he said.

"I personally don’t believe officers can’t relate to the community they police because they don’t live there," he added. "We aggressively recruit minority officers … and many come from outside of Rochester."

When people see each other as human beings through proximity, though, there are more opportunities to build bridges, added Walker-Cowart.

"We need to try and bridge relationships and get together to come up with solutions," noted Cynthia Middleton, a South Carolina native who has lived in Rochester for 42 years and attended the panel discussion.

While she supported the good intentions of the panelists and organizers of the discussion, Middleton said the issue of race relations was bigger than all of them.

Inviting police officers as well as judges and probation officers to the conversation also is an important part of addressing racial disparity in terms of the criminal justice system, noted Herriott Sullivan.

"Law enforcement is just the start," she said. "We have to look at the entire process."

A follow-up meeting was scheduled for Aug. 9 to discuss how to leverage the ideas raised by the forum, organizers said.