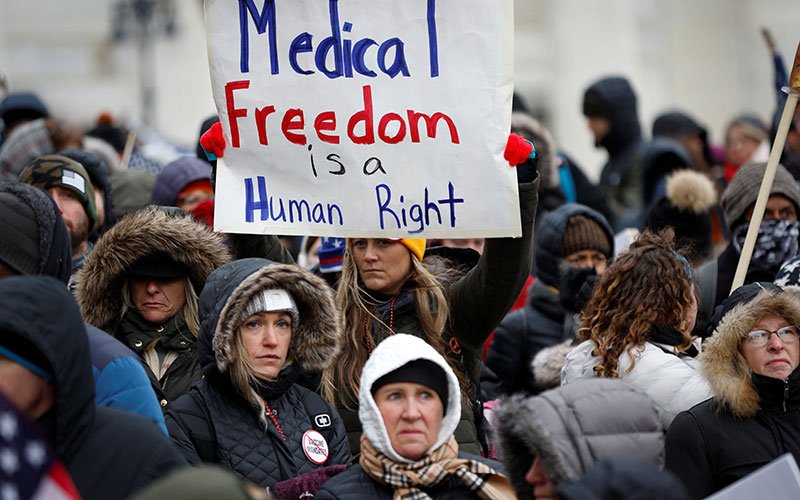 People in Albany, N.Y., demonstrate against COVID-19 vaccine mandates Jan. 5, 2022. The U.S. Supreme Court blocked the Biden administration's vaccine-or-testing mandate for large employers in a Jan. 13 ruling. In a separate decision, the court upheld the mandate for most health care workers. (CNS photo by Mike Segar/Reuters)

WASHINGTON (CNS) — The Supreme Court in a 6-3 decision Jan. 13 blocked a rule by the Biden administration that would have required employees at large businesses to show proof of a COVID-19 vaccination or wear masks and get tested each week for the coronavirus.

In a separate 5-4 decision issued the same day, the court said the vaccine mandate for most health care workers could go into effect.

The rule for employees, at businesses with more than 100 employees, was issued last fall by the Occupational Safety and Health Administration, which estimated the requirement would affect about 80 million workers. OSHA also said the rule would have saved thousands of lives and prevented hundreds of thousands of people from hospitalizations.

In an unsigned opinion, the justices said what many of them had expressed in oral arguments Jan. 7 in the emergency hearing about this mandate: that the administration was overstepping its authority.

“OSHA has never before imposed such a mandate. Nor has Congress. Indeed, although Congress has enacted significant legislation addressing the COVID-19 pandemic, it has declined to enact any measure similar to what OSHA has promulgated here,” the justices wrote.

In a joint dissent, Justices Stephen Breyer, Elena Kagan and Sonia Sotomayor disagreed, saying the government agency was acting within its authority, unlike the nation’s high court, which they described as “lacking any knowledge of how to safeguard workplaces” while it remained “insulated from responsibility for any damage it causes.”

The three justices disputing the court’s ruling for businesses said that “in the face of a still-raging pandemic, this court tells the agency charged with protecting worker safety that it may not do so in all the workplaces needed.”