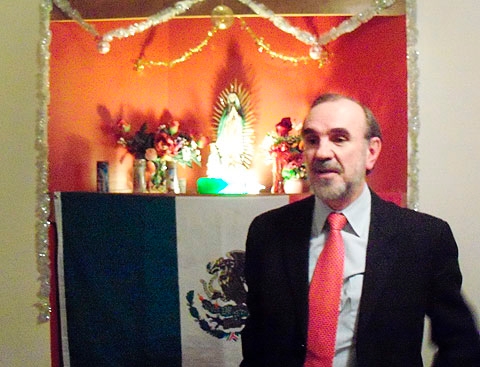 SODUS — Representatives from the Consul General of Mexico visited with migrant workers in the Sodus area days before Christmas as part of an initiative to hear the needs and concerns of Mexicans throughout New York state.

The Dec. 22 visit by Consul Carlos M. Sada — whose office is based in New York City — to La Casa was marked by such sharing as well as breaking bread with food made by the workers, said Peter Mares, an outreach worker for Catholic Charities of Wayne County. Mares manages La Casa, a migrant-housing center.

Mares said that he was impressed that Sada spent more than an hour listening to the stories recounted by the more than 20 workers who attended. They welcomed him by singing Mexico’s national anthem, Mares added.

"That kind of broke the ice," he remarked. "And then we shook hands and he took the time to talk to everyone."

The Sodus stop was one of several Sada made in upstate New York as part of a "Consulate on Wheels" program, explained Jimena Monjarás Guerra, who oversees political and economic affairs for the Consulate General of Mexico in New York. Sada met with workers, law enforcement officials and community leaders in Buffalo and Syracuse as well as toured the Federal Detention Center in Batavia, she added.