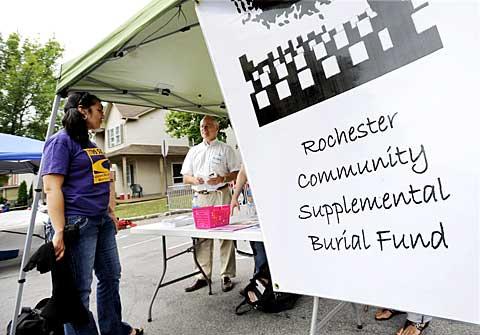 ROCHESTER — Jane Bennett does not believe grieving families should be forced to cremate their loved ones because they cannot afford to pay for their burials.

That is why the Rochester resident said that she applauds the efforts of local activists who have created a community burial fund to offer financial support to families in need. Bennett learned of the fund during the Clarissa Street Reunion Aug. 21 when members of the Burial Advisory Council offered information at a booth. Bennett added that she hopes local African-American churches will respond with donations.

"It’s very nice," she said of the fund. "The word needs to be spread more."

The Rochester Community Supplemental Burial Fund, which will be administered by Monroe County’s burial coordinator, was created through an agreement between the county and the Greater Rochester Community of Churches, said Marvin Mich, GRCC president. By having the nonprofit organization serve as holder of the fund, donations from individuals and agencies are tax exempt, said Mich, who also is director of social policy and research for Catholic Family Center. GRCC also can solicit donations, which the county cannot do, he added.

"We’ve sent out a letter to all the faith communities in Rochester … informing them of the fund and asking for their support," Mich said of the group’s campaign to spread awareness about the new fund. The grassroots efforts also will include having a booth or table at events for the Hispanic community, he added.

Mich also serves on the Burial Advisory Council, which grew out of the Citizens for a Dignified Burial group that formed because of Monroe County’s funding cuts four years ago. At that time, payments to cover the funeral and burial expenses of the indigent were reduced from $1,850 to $1,250 and many families were forced to choose cremation since they could not afford burial, local activists said. For some ethnic communities — including Hispanics, African-Americans and Native Americas — cremation goes against their faith traditions.

Initially, the group tried to get the county to reverse its policy, Mich noted. While those efforts were not successful, the group continued pressing and the county hired a burial coordinator, Shirl Clark, to work with families on a case-by-case basis, he added. By working with families individually and reducing costs whenever possible, the county was able to put any funds leftover from a family’s $1,250 burial allocation into a supplemental fund that would be available to others. For example, if a family’s burial costs totaled $1,000, then the remaining $250 from the allocation would go into the surplus fund, said Father Laurence Tracy, who served on the Citizens for a Dignified Burial group.

That county fund, which currently totals about $5,000, will serve as a cushion as the GRCC continues its grassroots campaign to raise money and awareness, Mich noted. The goal is to have $10,000 in the fund for the first year, he said.

"We have to build the fund to have some money to give away," he added. "We want to get the word out so people can contribute to this."

Father Tracy said that he hopes the fund will mean better treatment of impoverished families during such difficult times in their lives.

"The bottom line is burial with dignity, which is respecting the wishes of the family," he said.

William Siplin of Rochester, who helped inform people about the fund at a table set up in front of Mt. Olivet Baptist Church on Aug. 21, said that he knows there are a lot of people who will benefit now that the fund has been established.

"Anything you do is an improvement," he said.

Alberta Moss, a GRCC member who also has volunteered to get the word out this summer, said that she is proud of what the organization has accomplished.

"We have some great stuff going on at GRCC," she added. "We look out for people coming in and going out."