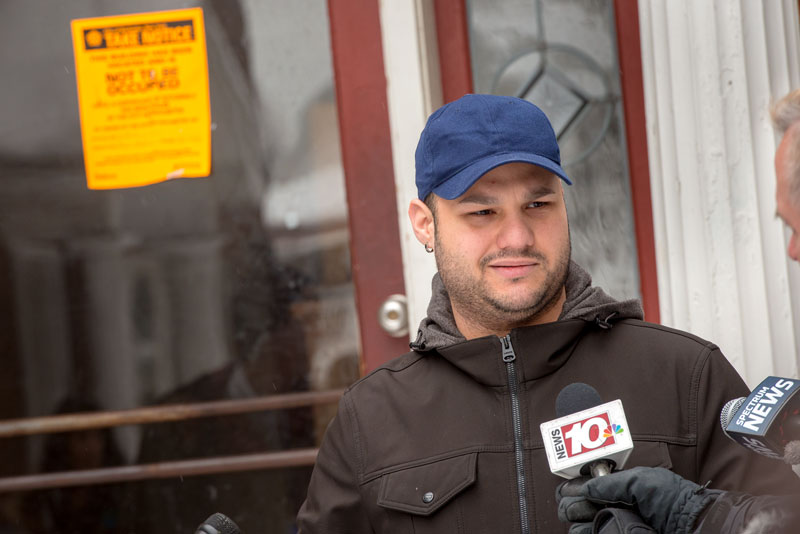 Rochester resident Jesús Miranda speaks to reporters in front of his apartment building on Dewey Ave during a Jan. 8 press conference regarding issues within the condemned home.

ROCHESTER — The new year did not get off to an auspicious start for Jesús Miranda.

The native of Puerto Rico found himself without heat or hot water along with fellow tenants at his apartment building at 960 Dewey Ave., he said Jan. 5 as he stood in front of the building. City inspectors condemned the building a week after the issues began, and he was forced to sleep and shower at friends’ homes.

“It’s been very difficult because I don’t like to bother nobody,” he said.

When the building’s tenants were ordered to evacuate, Miranda didn’t qualify for assistance from social services because of his income as a manager at Walmart. The divorced father of three young children said he has no other family in the area. His family in Puerto Rico has suggested he return to the island, he said.

Even though Miranda and other tenants in his building have returned to their apartments, heating remains spotty, he said. Building repairs in question were completed, and the evacuation order was lifted last month, confirmed Gary Kirkmire, the city’s director of buildings and zoning. Miranda has little choice but to stay because affordable apartments are hard to come by, he said, which is a reason he has joined the City-Wide Tenants Union of Rochester.

Miranda’s situation and other recent cases in other areas of the city demonstrate why City-Wide Tenants Union of Rochester formed last fall, said Ryan Acuff, who heads up the advocacy group Take Back the Land, a local organization formed in 2014 to advocate for access to housing as a human right. The union is calling on city officials to increase tenant protections, including the right for tenants to bring cases to a Housing Court, which currently is only available to residents in Buffalo and New York City, explained Acuff.

“We want to organize as many tenants as want to be involved to address many of the issues that cut across (all areas),” he said. “Policy changes can address systematic issues and benefit all tenants.”

The Tenants Union is advocating for several initiatives, beginning with a Housing Court to hear tenant concerns. Following conversations with city council members, some of whom attended a town hall meeting on housing Jan. 25 at St. Mary Church, a legislative proposal for the Housing Court of Rochester was submitted in the state Assembly by Assemblyman Harry Bronson, Acuff said. The tenant group also hopes for a similar proposal in state Senate, he said, as current law only allows for tenants to sue in small claims court for financial reasons, such as return of a security deposit.

“It doesn’t make sense … that landlords can bring tenants to court, but tenants can’t bring landlords to court,” Acuff noted. “A Housing Court would be a positive step, but it’s not the only thing necessary (to protect tenants).”

Since the Housing Court would be located in Rochester, Robach said he needs a “home rule” request from the city in order to bring such a bill to the state Senate, as was done in recent years in establishing a Traffic Court in Rochester.

The need for a court and other pressing tenant issues were raised during the town hall meeting on housing at St. Mary, which more than 100 people attended, said Deacon David Palma.

“Some of the stories that were shared were hard to listen to,” he said. “There is a great deal of suffering in our city.”

Staff members at St. Mary have been receiving more calls than normal for rental assistance, he added.

“There are many reasons people ask for help,” he said. “Most commonly, there is a financial crisis that has used the rent money, a car breaks down, an unexpected medical bill. … We try to connect folks to agencies that might help. Unfortunately, we do not have funds to help everyone who comes to us.”

To keep people from losing their apartments when they face such financial crises, the City-Wide Tenants Union of Rochester is recommending that the city adopt rent stabilization programs similar to rent-controlled buildings in New York City, Acuff said. The union also wants “just-cause eviction” protection, which would prevent landlords from arbitrarily evicting tenants, he said.

These measures would help avoid the situations seen recently when tenants found themselves living in deplorable conditions — without heat or in apartments infested with mold — and being told by the Monroe County Department of Human Services to check in at a homeless shelter, he said.

“If there are no protections (for) tenants, it’s going to lead to very unsteady neighborhoods,” Deacon Palma noted.

Access to stable, safe and affordable housing for all state residents should be a priority for the governor’s office, Acuff said. At the very least, however, the Tenants Union hopes funding for the Housing Court of Rochester is included in the state budget to be adopted in April, he said.

“Housing should be a major priority given the depth of the … homeless crisis across the state and in Rochester,” he said.

In Rochester, relying on the city’s code enforcement office alone to solve tenant concerns has shown to be insufficient, he added.

“Every landlord should make apartments habitable; that’s their obligation,” he said. “It’s not for tenants to move. … They need greater systematic protections.”