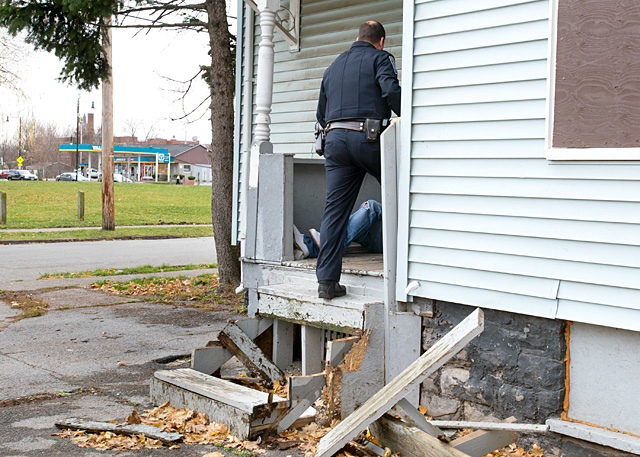 Rochester City Police Captain Kevin Costello confronts a heroin user outside of an unoccupied residence on Sullivan Street during a foot patrol of the North Clinton neighborhood Dec. 1.

ROCHESTER — City, police and neighborhood groups are working together to take back their streets after a surge in heroin use along the North Clinton Avenue area.

The city began focusing on the area in July by adding police resources and clearing empty lots of trees and shrubbery to increase visibility of users, said Rochester Police Captain Kevin Costello, who heads up the Clinton section. After an intensive police presence over four weeks in November that included monitoring of activity by community groups, Mayor Lovely Warren and Police Chief Michael Ciminelli held a press conference Nov. 21 to publicize those efforts.

The public announcement offered "an opportunity to say this is not place to do it," Costello said of heroin use. "Individuals impacted by use are trying to take back their neighborhoods."

Coming out publicly about the crisis was a challenge, noted Miguel Meléndez from Project HOPE, a neighborhood revitalization project created by Ibero-American Development Corp. with funding from the Greater Rochester Health Foundation.

But neighbors knew more help was needed earlier this year when they began seeing needles on the ground, sometimes in the hundreds, said Meléndez. Trillium Health outreach workers had been picking up needles, but even they couldn’t keep up, he added.

Efforts in Rochester counter surge in heroin use

"The problem was pretty bad," he said.

Officer Eric Majewicz said the department had been working with Project HOPE for several years to eradicate drug markets in the Clinton area. The noticeable increase in heroin use, a trend happening across the country, required a larger collaborative effort, he said.

Residents shared their concerns with the mayor and police chief when they took part in a Clergy on Patrol walk in June, Meléndez said. Warren then brought along more city staff during a follow-up walk in July, he added, and initial steps to rectify the situation included adding street lights and cutting shrubs and bushes.

Neighbors didn’t see much difference in heroin use, though, so additional meetings were held, including walks with police officers to point out hot spots, Meléndez explained. RPD subsequently assigned extra patrols to the area from 6 a.m. to 11 p.m., according to information from the mayor’s office. They also redirected traffic to hamper transactions.

"We did this big show of force," Costello added. "Additional funding will be needed to stay on top of the police side."

"We need to get help for those people who suffer from addiction," which is a component that will take longer to address, he said.

During the press conference, the mayor identified addiction treatment and the environmental conditions of the neighborhood as the key areas of focus in addition to law enforcement. According to information from the mayor’s office, Warren is working on legislative and judicial strategies to enable officers to detain users and bring them to "drop-off" treatment centers operated by such agencies as Rochester Regional Health.

"We’re staying positive and hopeful that we’re taking the streets back, but we’re also sensitive to the needs of the users and are willing to help send them for help," noted Daisy Rivera-Algarin, senior marketing specialist for the city of Rochester.

The extent of the local heroin crisis was outlined in a June report on heroin and pain medication use that was released by the Finger Lakes Health Systems Agency (FLHSA). Hospital admission for heroin overdoses rose 1,157 percent from 2000 to 2014 in Monroe County and 186 percent in adjacent rural counties, according to the report (http://bit.ly/2gUoQ29). A contributing factor to the spike may be the New York State Department of Health’s I-STOP Prescription Monitoring Program, the report stated. The regulation adopted in 2013 requires providers to check prescription histories of their patients prior to writing scripts to prevent abuse of prescription drugs, according to the report.

"It’s very difficult to causatively attribute things," said Albert Blankley, director of research and analytics for FLHSA. "To limit the availability of prescription medications is certainly well-intentioned. But one of the potential … unintended consequences is that the alternative becomes more preferable. In this case, the alternative is heroin."

Because the problem is regional, Meléndez said residents are grateful to have support. Residents comprise only about 27 percent of the vehicle traffic in certain hot spots of heroin use, he noted.

"Our neighborhood shouldn’t be taking this on (alone)," Meléndez. "We just want to get a place at this stage where impact is minimized."

Improvements from the city’s Department of Environmental Services have helped, he added. In October, city crews installed fencing and barricades around a portion of Don Samuel Torres Park because it had become an open-air drug market. The crews also launched an intensive cleanup of the side streets along North Clinton, including Kappel Place, Scrantom Street and Evergreen Street. Crews have cleaned hundreds of spent needles from vacant houses along these streets where users would inject themselves with heroin after their purchases, according to city officials.

"We’re hoping we can talk about this as a neighborhood of promise, great opportunity and a lot of assets," Meléndez remarked. "It has a lot of potential. We’re just victimized with this challenge. We’ve seen a lot of change in eight years. The community is getting stronger. In the long run, good things will prevail."