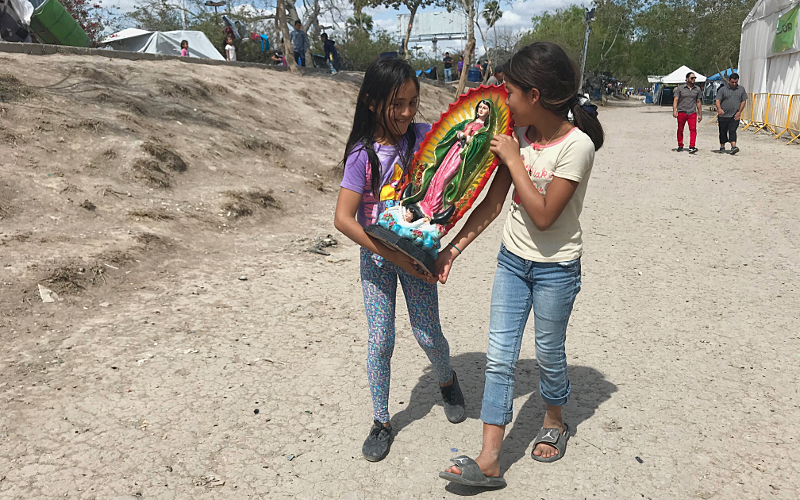 Girls carry a statue of Our Lady of Guadalupe through a tent camp in Matamoros, Mexico, Feb. 29. The camp is home to some 2,500 people seeking asylum in the United States, but forced to stay on the Mexican side of the border until their claims are decided. (CNS photo by David Agren)

MATAMOROS, Mexico — From a row of tables set up amid a sea of tents, volunteers in teal shirts distributed bags of basics such as beans, rice and cooking oil to a long line of asylum-seekers in this makeshift camp along the banks of the Rio Grande.

Dressed in a navy habit, blue Oxford shirt and Birkenstock sandals, Sister Norma Pimentel greeted the asylum-seekers and listened to their concerns. She also heard stories of hardship from a people living in the squalor of tents with little governmental assistance, surviving in an unsafe Mexican border town and trying to navigate the U.S. asylum system.

The people there “seem to be a nuisance to the government, (a) problem that they have to make go away,” Sister Pimentel said from the camp, which formed last July in response to a program known as “Remain in Mexico.”

“It was done in a way that they swept it under the rug: send it to Matamoros. Now it’s Mexico’s problem,” she said of “Remain in Mexico.”

“It’s sort of like turning their backs on this reality. … As long as the problem is not in the United States, it is resolved, according to them.”

The “Remain in Mexico” program has forced more than 60,000 asylum-seekers to wait on the Mexican side of the border as their claims are heard in U.S. courts. It has proved controversial as critics contend it destroyed the traditional asylum system.

Immigration lawyers interviewed by Catholic News Service also say the rules are vaguely written and rife with irregularities, with people ineligible for the program — such those suffering illnesses — being sent to Mexico.
The 9th U.S. Circuit Court of Appeals invalidated the program, formally known as Migrant Protection Protocols, Feb. 28, but later stayed its ruling.

Sister Pimentel welcomed the initial ruling and said of the “Remain in Mexico” scheme, “We cannot be OK with policies that contribute to the human suffering of people. If they hurt a human being, then they’re wrong and need to be replaced with something more humane.”

Sister Pimentel has long sought to ameliorate the suffering of migrant families arriving at the U.S. border. As the director of Catholic Charities of the Rio Grande Valley, she opened a relief center in 2014 in the city of McAllen, which receives migrants from the Border Patrol. Catholic Charities then helps coordinate travel to destinations throughout the United States. places where they would be cared for by family.

But when “Remain in Mexico” was rolled out in the Rio Grande Valley, migrants stopped arriving. Sister Pimentel subsequently started crossing into the violent state of Tamaulipas to tend to them.

“(It) took the migration crisis to an even more severe level,” she said of “Remain in Mexico.”

“What we were talking about before was a humanitarian crisis. This is even worse,” she said. “It is total abandonment of these families in conditions that are so terrible.”

The Mexican government promised to provide the asylum-seekers with access to health care, work and education. But many of the migrants have been forced to fend for themselves and have suffered indignities such as kidnapping, as gangs seek ransoms from their relatives already in the United States.

Civic organizations and kind-hearted individuals have provided for the tent-city residents, who until recently lacked toilets — resulting in illnesses — and were forced to wash and bathe in “the polluted waters of the Rio Grande,” Sister Pimentel said.

“It was not until we took action that the Mexican government decided that they wanted to take part in the response,” Sister Pimentel said. “We work with them now and they’re very helpful,” having improved sanitation and installed some infrastructure.

The Diocese of Matamoros also provides support and spiritual attention to the migrants. It operates a migrant shelter in the city, too.

The shelter has seen few guests, however, as migrants prefer to stay close to the bridge — even if living in tents — as many cling to the hope the U.S. border will open, said Father Francisco Gallardo, diocesan director of migrant ministries.

That hope was short-lived as lawyers told migrants the following day that the decision had been stayed. They counseled the asylum-seekers to stay put, to continue working on their court cases and not to cross the Rio Grande illegally, an act that could result in their deportation or expedited removal.

Patience for many of the asylum-seekers appeared to be wearing thin, however.

“It morally kills you,” Jose, an electrician from Honduras, said of the court process. “They don’t give you any hope, even though you have proof” to support a claim, he said, adding he had fled a gang demanding extortion payments back home.

Roughly 3 percent of the participants in “Remain Mexico” have a lawyer, and the rate of those winning their cases is around 1.4 percent — with those having legal representation six times more likely to win, said Jodi Goodwin, a Brownsville immigration attorney. Most of those winning are from Venezuela, Cuba and Nicaragua, whose cases are “more straight-up political, Goodwin said, rather than the northern triangle of Central America, where people are fleeing gang violence.

Observers say the number of “Remain in Mexico” participants in the Matamoros tent city is shrinking due to Mexico stepping up enforcement in its southern states and new U.S. policies, which limit the categories for asylum applications, expedite removal or fly asylum-seekers to Guatemala and force them to seek protection there.

Mexicans fleeing violence in their own country are keeping the camp population steady.

Sister Pimentel said she sees the camp — with its increasing infrastructure — taking on a sense of permanence. She regularly brings Catholic and civic groups wanting to assist migrants across the border, but says they should first look to help out at home.

“Start with them. If you want to do more, then you’re welcome to come to South Texas and help us out.”