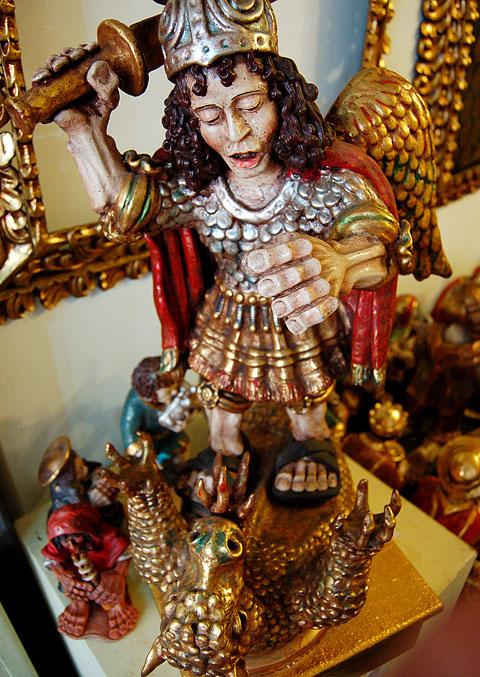 LIMA, Peru (CNS) — The pain on the face of the crucified Christ in Maria Antonieta Merida’s living room was born of harsh farm life in the remote Andes.

Around the room, ceramic figures cram the tables and shelves. Some are her work; others were crafted by her father, Edilberto Merida, who died last year at age 82.

Edilberto Merida began as a woodcarver, but one day as he walked home up San Blas hill in Cuzco, in Peru’s southern highlands, he was struck by the worn, weathered face of a Quechua farm woman. Needing a more powerful medium to capture it, he turned to clay.

A devout Catholic, Edilberto Merida began to mold figures of the crucified Christ with an indigenous farmer’s craggy face and oversized, gnarled fingers and toes, a style for which he became well-known.

“They were Christ figures with great strength, great pain and great expressiveness in each face,” his daughter says. “Every piece is different. They are unique.”

He also portrayed the Andean peasant farmers’ struggle for freedom from hunger and serfdom, a theme echoed in the work of the Peruvian theologian, Dominican Father Gustavo Gutierrez.

In a piece called “Cry of Hunger,” a woman looks heavenward, her face twisted in pain, her mouth open in lament or protest, as she cradles her dying child in her arms. Her belly is a hollow cavity blocked by bars. Hands grip the bars, as though trying to break free.

“His work shows the suffering of indigenous farmers, the hunger,” his daughter says. “Through his work, people have seen their suffering and their rebellion.”

Maria Antonieta Merida is the only one of eight children to follow in her father’s footsteps. In a note he wrote to her before he died, he said, “Your hands are my hands … you are heir to my work.”

There are some differences. Many of her figures have softer, less indigenous faces, and their garments are trimmed with silver and gold leaf, embellishments typical of the colonial Cuzco school of religious art, which she added with her father’s approval. But she also crafts pieces in her father’s style, keeping his legacy alive.

Religious themes are foremost. In a piece she created by his bedside during his last days, a peasant boy carries a cross bearing the face and hands of Christ. Only a view from the side reveals that the boy is an angel.

A “Pieta” in her father’s style shows Mary as a Quechua woman, her dark hair in braids, cradling Jesus on her lap. The features of mother and son were unmistakably molded by Merida hands.

“I miss my father,” Merida says. “Whenever I finished a piece, I would take it to my father and ask his opinion.”