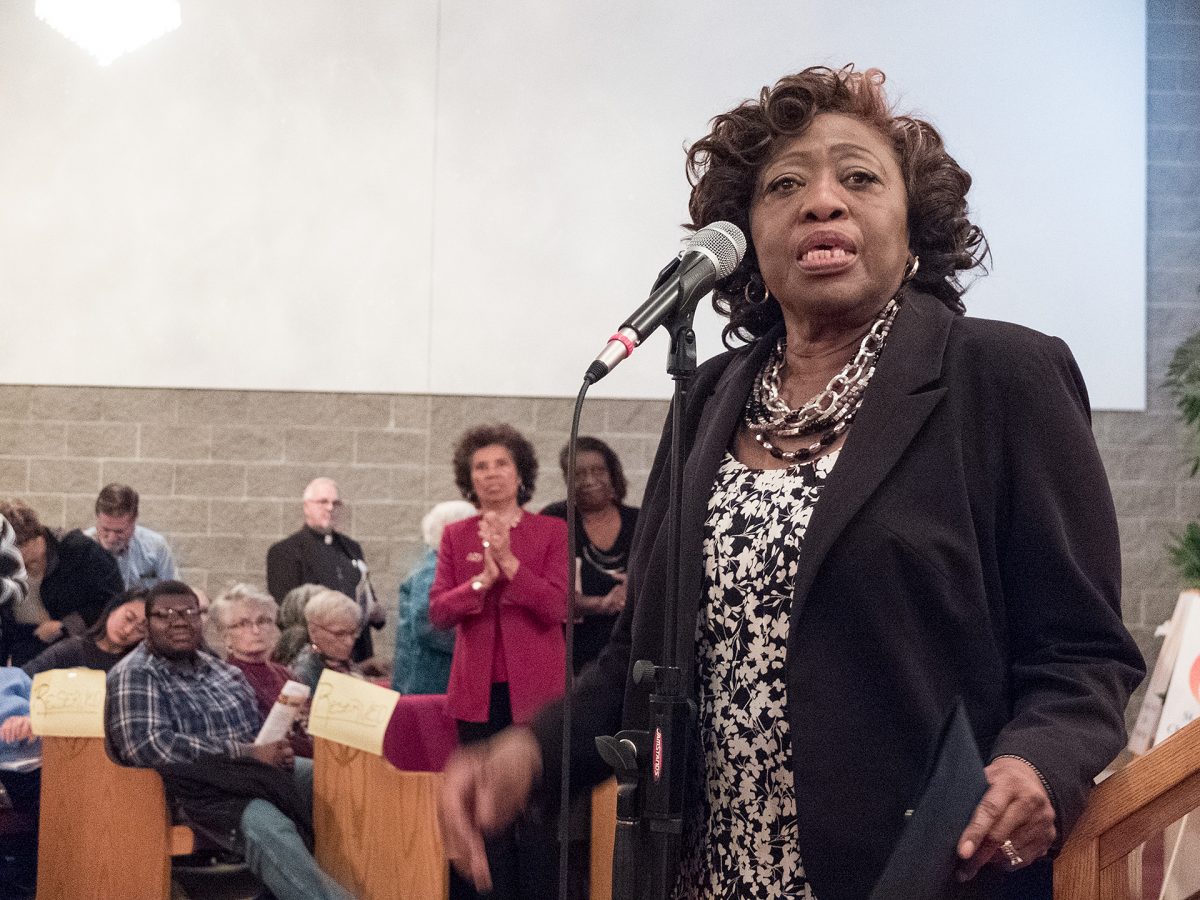 Loretta C. Scott , President Rochester City Council responds to question and said she will countunie to work towards creating a functioning independent police accountability system with power to subpoena, investigate and discipline during a RocACTS meeting held at Antioch Baptist Church in Rochester on Nov. 2.

ROCHESTER — Community groups and residents are continuing to call for a new process of reviewing citizens’ complaints against the Rochester Police Department.

On Nov. 2, more than 400 people attended a community action meeting on a variety of topics that was held at Antioch Missionary Baptist Church. During the meeting, members of RochesterACTS called for the creation of a new civilian review process to ensure greater police accountability regarding alleged police abuse.

By including the police issue in its agenda, RocACTS members join more than 40 community and faith groups — including Enough is Enough, the Coalition for Police Reform, United Christian Leadership Ministry, the Greater Rochester Community of Churches and Ibero-American Action League — that endorse the creation of a new civilian board.

The Rev. James Simmons, pastor of Baber AME Church, said the community needs a process “that has teeth, holds officers accountable” in cases of excessive violence. Under a new process that has been proposed by the groups, a civilian review board would have subpoena power so it can conduct its own investigations, he added, and the chief of police would not have control of the final decisions by the board as under the current system.

“We also want proper community input in its creation,” Simmons said of a new board.

City Councilwoman Loretta Scott received a standing ovation during the meeting when she committed to creating a new accountability process that is independent and trustworthy.

“This (commitment) is not an admonishment of individual officers; this is an acknowledgement of a systemic problem that exists all across this nation,” she said to applause from the audience. “We know that implicit bias and institutional racism are real, and they’re harming our communities.”

The Rev. Nina Warr, pastor of Inner Faith Gospel Tabernacle, said her family has been forever changed after her husband was allegedly beaten by police in 2013 as he was in his wheelchair waiting for a bus.

“Not all police officers are bad,” she said. “But I do believe … there has got to be increased accountability for the people of the City of Rochester.”

The community’s loss of trust in the review process for alleged police misconduct is a major factor in the need to revamp how the system works, Scott added.

“That’s a problem, one that I’m working with my (council) colleagues to address,” she said.

In a Nov. 6 e-mail to El Mensajero Católico, Scott said the council will review an analysis of the current process that was conducted by the Center for Governmental Research and develop a legislative proposal for a new process within the next couple of months. Public hearings are expected to follow, she said.

During public meetings held earlier this year, Enough is Enough and the Rochester Coalition for Police Reform produced a 111-page report (http://bit.ly/2phUcDo) on allegations of excessive use of force from 2002-15. These allegations were investigated by the RPD and the Civilian Review Board that was created by city council in 1992.

Based on recommendations from the Civilian Review Board and the Professional Standards Section, which serves as internal affairs for the RPD, the police chief determines whether to dismiss or sustain a complaint, according to information from advocates and RPD officials. The report found that 2 percent of 1,173 civilian complaints were sustained by the Rochester chief of police and 5 percent by the Civilian Review Board from 2002-15.

The harshest penalties handed out for any sustained complaints were six suspensions over a 14-year period, according to the Enough is Enough report.