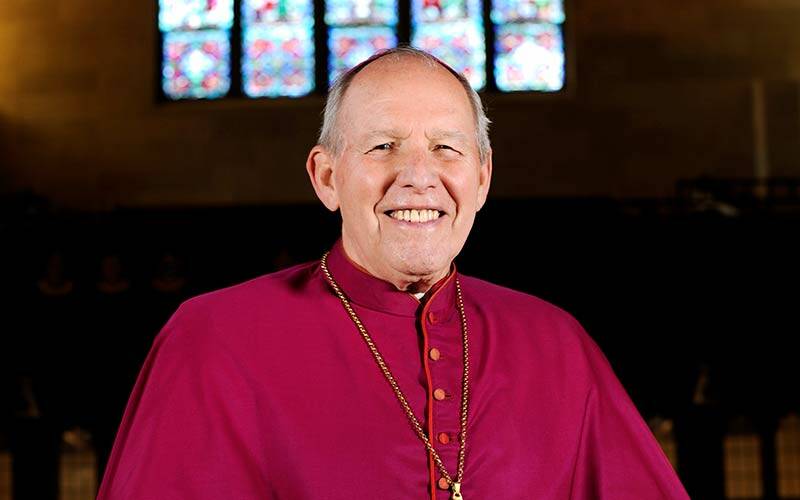 Bishop Emeritus Matthew H. Clark, shepherd of the Diocese of Rochester for more than 33 years, died Sunday morning, January 22, 2023, at the Sisters of St. Joseph Motherhouse in Pittsford. He was 85 years old.

Matthew Harvey Clark was born July 15, 1937, and grew up in the Town of Waterford near Albany. He attended Catholic Central High School in Troy; Holy Cross College in Worcester, Mass.; and Mater Christi Seminary in Albany.

He formed an early connection to the Rochester Diocese as a seminarian at the former St. Bernard’s Seminary, which he attended from 1957-59.

Father James Lawlor’s friendship with Bishop Clark dates back to their days together at St. Bernard’s.

“He was very much a part of the life of the seminary,” said Father Lawlor, a senior priest of the Rochester Diocese, noting that the bishop was a good student and athlete. “He didn’t stand aloof; he was very friendly.”

However, he said he didn’t detect any early signs that Bishop Clark would someday become bishop. “In those days you don’t think of being a bishop,” he remarked. “You’re just trying to survive and be ordained.”

Father Lawlor said Bishop Clark was “such a gracious individual. He just had a real interest in each person, and took each person seriously.”

“Another saint in heaven,” he remarked.

Bishop Clark completed priestly formation at North American College in Rome and was ordained a priest of the Diocese of Albany on Dec. 19, 1962, at the Church of Christ the King in Rome. Over the next decade, then-Father Clark served as a teacher, parish priest, vice chancellor and priests’ personnel director in the Albany Diocese, He also earned licentiates from Gregorian University in sacred theology (in 1963) and canon law (in 1966). Father Clark then served from 1972-79 at the North American College as assistant spiritual director and later spiritual director for seminarians.

Cardinal Timothy M. Dolan, archbishop of New York, has been a friend since Bishop Clark was his spiritual director at North American College in Rome in the early 1970s.

“While, given the fragile state of his health these recent years, we realized that he would soon be going home, his death still leaves a void in our lives, as we have savored and counted upon his gentle, wise, holy presence for decades, myself since I met him in 1973,” Cardinal Dolan wrote in a Jan. 2 letter to Bishop Salvatore R. Matano. “Like you, I praise God for his person, his vocation, his long life, and ask the Jesus he loved and served to embrace Matthew for all eternity.”

On April 23, 1979, Bishop Clark was named to lead the Rochester Diocese by Pope St. John Paul II, who ordained him a bishop in St. Peter’s Basilica on May 27 of that year. At only 41 years old, he was installed as Rochester’s eighth bishop on June 26, 1979, continuing in that role until his 2012 retirement at age 75.

Bishop Clark’s tenure was the second-longest in diocesan history, second only to the 40-year reign of founding Bishop Bernard J. McQuaid.

Father Paul Tomasso, current diocesan vicar general, was one of the first priests ordained by Bishop Clark in 1981 and served as the bishop’s secretary from 1986-96.

“Bishop Clark was someone who listened and encouraged others, especially children and young people, when visiting schools, colleges or on the church steps after a parish celebration. He believed we all can enrich one another by using our talents and blessings for the community. He easily brought warmth and respect into every meeting,” Father Tomasso said.

“Bishop Clark was a very compassionate and prayerful person, personally pained by the violence, suffering and poverty that seems to never go away,” Father Tomasso added. “Aware that these are big problems, he encouraged hope and effort just the same.”

Bishop Clark ‘preferred to be in the parishes’

Father Kevin McKenna, pastor of St. Theodore Parish in Gates, said that he knew Bishop Clark well from their work together at the Diocese of Rochester’s Pastoral Center, where Father McKenna served as diocesan vice chancellor (1984-88), chancellor (1992-2001) and director of legal services (1991-2001).

“He greatly depended on his office staff for administrative support, since he much preferred to be in the parishes and interacting with the pastoral staff and parishioners,” Father McKenna said.

“I always admired and appreciated that when he came back from the office, no doubt after several difficult meetings or appointments, he never complained or pouted. He was always gentle and even keeled, curious to know about our day, always with a wonderful wit and sense of humor,” he said.

“I also greatly admired his love for his family — I came to know them through their many visits to the rectory and Bishop Clark’s obvious love and affection for them — and them for him,” Father McKenna added.

Father McKenna noted that he also admired Bishop Clark’s long-running “Along the Way” column in the Catholic Courier: “He wrote with a human and often humorous touch.”

“My only regret is that I never could convince him to support the Toronto Blue Jays instead of his beloved Yankees,” Father McKenna quipped. “It was always the source for good-humored bantering between us. He always took time to call me or send me an email after a game, before I lived with him at the cathedral, in case I had missed a victory of the Yankees over the Jays.”

“I will greatly miss his kindness and friendship,” Father McKenna said.

“We worked very well together,” he said of Bishop Clark. “He was very good at delegating. He felt that if you had the job, it was yours to do, and elements of that showed in the people he appointed.”

“Both personally and professionally, Bishop Clark was always very supportive of the permanent deacons, their wives and families,” said Deacon Giblin, who was ordained in 2000. “He ordained many of the deacons who are serving today, along with those on senior status and those who have returned to the Lord. Our community joins the rest of the faithful in mourning his passing and commending him to the loving arms of the Servant Christ.”

Sister of Mercy Mary Ann Binsack began in 2001 as administrator of Bishop Clark’s office and has remained in that role ever since, handling his correspondence and official business.

“I have listened to many stories in the last few days from sisters, priests, family and friends who came to pray for and thank the bishop. They were all stories of how, in one way or another, he had touched them through listening to a concern, writing a note of encouragement, confirming a daughter or son, visiting a sick relative, or enjoying a meal at their home,” Sister Binsack said. “The stories went on and on. To me, these stories summed up his life as one lived as a man of deep faith and integrity who ministered with and for his people with abundant love and care.”

In retirement, Bishop Clark immersed himself in leading retreats and missions. In 2019, he announced that he had been diagnosed with early-stage Alzheimer’s disease and a year later, he moved to the Sisters of St. Joseph Motherhouse.

Bishop Clark’s episcopal motto was “God’s love endures forever.” He referred to love in a 2012 Catholic Courier story, giving a hushed, emotional response when asked about the legacy he hoped to leave as shepherd of the diocesan faithful. “I would like to be remembered as someone who loved them,” Bishop Clark said.