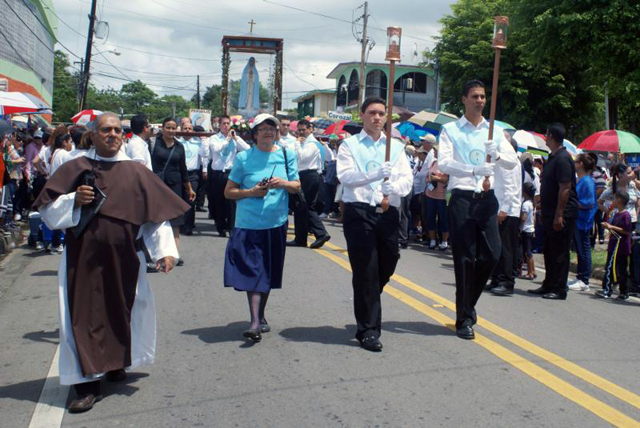 SABANA GRANDE, Puerto Rico (CNS) — Although followers of a popular devotion centered on Our Lady of the Rosary were cheerfully celebrating being allowed to attend a public Mass, the bishop planning to celebrate the liturgy warned that their practices continue to be unrecognized by the church.

The group, calling itself Our Lady of the Rosary of the Spring Devotee Association, announced May 2 that Mayaguez Bishop Alvaro Corrada del Rio was "inviting all devotees of the Virgin of the Spring to a Mass that will make history in Puerto Rico." The group’s press release suggested the bishop was celebrating Mass May 22 specifically as a prelude to the devotees’ anniversary pilgrimage to the Marian shrine in the Rincon area of this southwestern municipality.

The name "Virgin of the Spring" is a popular identifier adopted by devotees after Mary’s supposed apparitions at a spring-puddle in Sabana Grande in 1953. The group maintains that several students from a nearby grade school reported seeing "a beautiful young lady" floating on a cloud above a spring that provided water to the school.

The diocese has said that it has not found the apparent visions as supernatural in nature and has advised the faithful to avoid affiliating with the association.

Local newspapers published the press release May 4 under headlines suggesting that the Mass was specifically for the devotees and that Bishop Corrada was ending his distance from the group. The headlines spurred a social media outbreak, speculating about a policy change on the church’s part.

Ricardo Ramos Pesquera, association president, told Catholic News Service, "We wrote Bishop Corrada requesting to be allowed at the 10 o’clock Mass, and it was the bishop’s initiative not only to allow us there, but also to say the Mass and preach himself."

The Mayaguez Diocese quickly clarified the church’s position regarding the association in an advance copy of a letter from Bishop Corrada to CNS that was read at all Masses the weekend of May 7-8 and published May 9 by El Visitante, newspaper of the Archdiocese of San Juan.

In the letter, Bishop Corrada acknowledged the devotees’ request and his wish to celebrate Mass "to continue the dialogue I proposed to them in my clarifying letter of September 2014, which I reaffirm." But he also wrote: "I am going to Sabana Grande as this diocese’s bishop, responding to my pastoral duty to look after a group of Catholic faithful who request the holy Mass; not to celebrate their anniversary."

He clarified that he will be in Sabana Grande to celebrate the feast of the Holy Trinity. The letter reminded the faithful that there has been no change in the church’s stance regarding the association and its mission and that the 1987 decree dissolving the association remains in force. The bishop also encouraged diocesan and religious order priests not to participate in activities related to the spring and that any priests who celebrates Mass there would be automatically suspended from ministry.

The supposed Marian apparitions at the Sabana Grande Spring lasted from April 23 to May 25, 1953. Hundreds of thousands of faithful from across Puerto Rico packed a sugar cane field near the spring. Several people reported miraculous recoveries from serious illnesses and physical handicaps.

After two ecclesial investigations — one by the Diocese of Ponce, to which the Sabana Grande parish belonged in 1953, and the other by the Diocese of Mayaguez in 1986 — the results were "uniformly negative" and that reports of the apparitions lacked credibility.

The Marian devotion at the spring continued low-key until 1978, when Juan Angel Collado Pinto, one of the children who claimed to see Mary, announced that she had given him a series of messages for the world. At that time, he offered the first message; the most recent, the sixth, was pronounced 2008.

By 1980, a group of devotees had formed, with Collado at the helm, drawing people from throughout the island, including high profile figures from the arts, politics and show business. The resulting association legally incorporated in 1985 as Our Lady of the Spring Mission based in San Juan.

A year later, the mission was approved as a private association by the Puerto Rican bishops’ conference, but specifically without juridic personality, or legal recognition under canon law. However, that approval was vacated in 1987, when the bishops’ conference determined that "from the beginning, the association did not feel bound to the terms and interpretation of the (approval) decree."

One important problem between the diocese and the devotee association has been the group’s use of several names, including "Association Pro Devotion to the Virgin of the Rosary of the Spring," an identification they had requested and was denied by the diocese in 1987.

The relationship between the church and the association worsened when the group entered into a mega-project, dubbed The Mystical Mount, to build a resort-type center atop a mountain near the spring.

"That’s what brought them down," Father Edgardo Acosta Ocasio, diocesan communications director, told CNS. "With time all this was distorted; outside people taking over, new interests created … local humble people, elders, the real devotees — in numbers and quality — saw all this turning into a business and into a corrupted religious element."

Father Acosta, a native of Sabana Grande, said the distortion was part of a "more serious situation, both on the doctrinal and moral aspect."

Eventually, he said, the church determined no sacrament could be celebrated there, and the association could not be recognized as a Catholic organization.

The association’s image took another turn down in 2005, when claims of divergent practices — among these physical, psychological and sexual abuse — originally surfaced from former "disciples" of Collado.

Father Acosta said the church never opposed the individual, private devotion to the Virgin of the Rosary of the Spring, "especially praying rosary in the manner the church practices it."

He referred to a 1987 CEP letter to local bishops stating, "every private apparition has a subjective character, hence it cannot be expected to be a teaching for the whole people of God."

Father Acosta described as "a complex thing" the tension between the diocese and the devotee association.

"Bishop was trying — once again, because he did it before — to cool down tensions of the past," he said about the association’s recent press release.

"As a ‘sabeneno’ (Sabana Grande native), it would be an honor, a reason to be jubilant, if Our Lady had appeared there … but in this case the information has been manipulated."