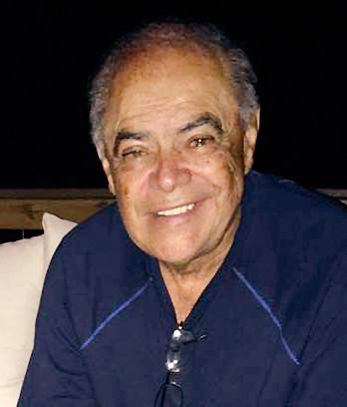 Benjamin Herrera, a native of Colombia who was a pioneer in local television programming for the Hispanic community, died March 4, 2016. He was 75.

According to his son Ben Herrera, Mr. Herrera began his career as an educator in his native Medellín and was a principal at an elementary school before deciding to move to Rochester with his wife, Nancy.

The couple had met and married in Colombia while she was serving as a Peace Corps worker there, his son said. They were married for 47 years.

Upon arriving in Rochester in 1969, Mr. Herrera found a job as a janitor at Eastman Kodak Co. He worked nights while taking classes at Monroe Community College to learn English and earn an associate’s degree in audio/visual arts.

Mr. Herrera moved up the ranks at Kodak, where he worked for 23 years, while also working part time as a host the WXXI program "¿Qué Pasa, Rochester?" said Herrera, who noted that his father had gained broadcasting experience as a radio announcer for soccer games in Colombia.

He left WXXI and retired from Kodak in the early 1990s, his son said. Soon after, the R News channel, now called Time Warner Cable News, asked him to produce and host a programcalled "R Mundo," which he did for nine years, his son said.

"My dad was just a news buff," Herrera said. "He just liked telling a story. And he was always interested in world events and what was going on."

"He wanted to make people aware of that community," he said.

Mr. Herrera served as an advocate for Latinos, added Tabita Torres, who was Mr. Herrera’s intern at R News while studying at St. John Fisher College.

"He always used to say, ‘The Latino community can’t be ignored. They have a voice,’" she recalled. "We’re here to provide them a platform with that voice and have them share their perspectives. He was chronicling our history, the community’s history through his work."

Torres said she had shadowed Mr. Herrera during his tenure at WXXI, so becoming his intern for "R Mundo" brought her experience with him full circle. She also stayed in touch with Mr. Herrera after leaving the show and he was always available to offer advice, Torres said.

"He didn’t want to give you the answers," she said. "He wanted you to work through it. He was a great teacher."

Torres and others who worked with him said Mr. Herrera was the consummate professional.

"Ben was always cool, always professional," said Iván Ramos, a former producer of "¿Qué Pasa, Rochester?" who worked with Mr. Herrera. "He was a gentleman, always very caring and patient with people. He would listen to them. I always felt like the biggest thing that he brought is, he was a persona cumplidora. He was always there."

Producing "¿Qué Pasa, Rochester?" was the first job after college for Alicia Nestle, and she found Mr. Herrera to be a great mentor and teacher.

"He was just so patient, understanding of me being new," she said. "He just treated me with respect and never, ever talked down to me. He was so willing to share his knowledge and expertise."

Nestle noted that Mr. Herrera had a warm, engaging personality.

"He was such a funny guy," said Nestle, who now works in communications for Constellation Brands. "The crew really liked working with him and respected him. … People really loved Ben. He was wonderful."

Mr. Herrera was known as a very family-oriented person, his former coworkers noted.

"He always talked about Nancy and how proud he was of his sons," Nestle said. "You really felt that."

"He was always very proud of their accomplishments," added Torres, who now works for United Way of Greater Rochester. "He had a tender place in his heart for family and friends. He was very loyal, very trustworthy."

Mr. Herrera is survived by his wife, Nancy; his sons and daughters-in-law, Brian and Donna, and Ben and Kristine; sister and brother-in-law, Nohelia and Edgar Jaramillio; two brothers and sisters-in-law, William and Cecilia, and Oscar and Maria Elena; and two grandsons, Alexander and Nathan.

A funeral Mass was celebrated March 9 at Good Shepherd Church in Henrietta. Donations in his memory may be sent to the Open Door Mission.