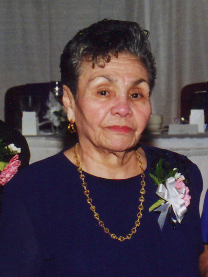 ROCHESTER — Ana Lydia Pérez, the matriarch of a well-known family in the Latino community, died Feb. 7, 2013, at the age of 90.

Mrs. Pérez was born in Cayey, Puerto Rico. She married her husband, Felix, in 1948 and five years later moved to Rochester. Ida Pérez said that her father couldn’t find work on the island at that time. And her mother had to stop working at a tobacco factory after having their third child, she added.

"They came here looking for a better life," Pérez noted.

When her father worked at area farms, her mother would help his fellow migrant workers who were here without their wives, added Pérez, who is Ibero-American Action League’s early childhood coordinator.

"She cooked and washed for them every week," Pérez said of her mother. "And once they brought their wives and were established here, she baby-sat for most of them. … She was always a helpful, giving person."

While Mrs. Pérez also had stints cooking for different area restaurants, she mostly worked in the home caring for her nine children as well as helping raise other family members and her grandchildren, her daughter said.

Ray Pérez, a parishioner of Our Lady of the Americas Parish, said his mother was an excellent cook.

"She recalled learning to cook at an early age on a humble farm in Puerto Rico … around 6 or 7 years old," he said. "Her grandmother, Francisca, taught her … standing her on top of a tin can of saltine crackers."

And though Mrs. Pérez didn’t receive a formal education, she had great wisdom and inner strength, Ray Pérez added.

"I guess she gained most from life experiences and her profound faith in God," he said. "She was a proud and caring mother who valued family unity and gatherings."

Mrs. Pérez was such a great role model that she even received the Mother of the Year award from the March of Dimes in 2000, said Ida Pérez.

While she felt honored by the award, Mrs. Pérez remained humble and devoted to her faith and church, and prayed the rosary up to her final days, her daughter said.

She was so humble that her family only discovered in recent years that Mrs. Pérez had paid for the food that was served following the "Rosarios de Cruz," an annual summer tradition at the former Our Lady of Mt. Carmel Church, Ida Pérez explained.

"It turned out my mom would save her loose change for the whole year. So when the rosarios came around, she would give the money to (the) church for refreshments. I didn’t know my mother did that and we’ve been going since I was 8. She was one of those servant leaders."

Mrs. Pérez was predeceased by her husband of 58 years, Felix Pérez; her son, Benjamin; and her parents. She is survived by sons and daughters-in-law, Ramon and Nancy Pérez, the Rev. Luis and Pamela Pérez, and Cristino and Norma Pérez; daughters and sons-in-law, Ida Pérez; Carmen Delia Figueroa; Maria and Jacob McNight; Ana and Marcos Santiago; and Carmen Luz Pérez-Rolon and Antonio Rolon; 19 grandchildren; and 25 great-grandchildren.

Donations in Mrs. Pérez’s name may be made to the Sister Regis Food Ministry at St. Frances Xavier Cabrini Parish or to Ibero’s Early Childhood Services.