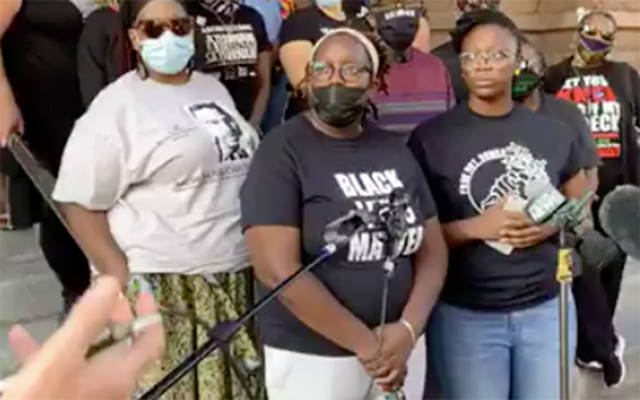 Bishop Salvatore R. Matano offered prayers and urged the community to continue working together for a more just society amid reports that a Black man died in March after being detained by Rochester police officers.

“The recent news of the tragic death of Mr. Daniel Prude and the visible pain of his family cause a deep sorrow in the hearts of all,” Bishop Matano said in a statement released Sept. 6. “We pray for the repose of his soul and the consolation of his family and friends. At the same time, we cannot cease yearning for peace, justice and truth in our land, where with the help of those dedicated to preserving our freedom and protecting us from all harm, we will achieve true and lasting peace and there are no acts of inhumanity among God’s children so contrary to His will that we love on another.”

“We continue to pray and work together for a more just society,” the bishop continued, “where tensions are able to be reduced, where conflicts can be settled, where peace prevails, where life is sacred and reverenced, and where the virtues of the Gospel reconcile us to one another and to the Father. May God bless our efforts so all may know the peace of unity in Christ.”

The bishop’s statement is just one of many that have surfaced since Free The People Roc and Prude’s family members publicly announced Prude’s death during a Sept. 2 press conference on the steps of Rochester City Hall. During the conference, video footage of the March 23 incident between Prude, 41, of Chicago, and Rochester police officers was released by the family’s lawyer. The video footage showed a naked Prude handcuffed and wearing a spit hood while being confined to the ground by multiple police officers. When officers found Prude to be non-responsive, an ambulance was called, he was revived at the scene and transported to Strong Memorial Hospital, where he was pronounced brain dead and later passed away March 30, Prude’s family members said during the press conference.

According to the Monroe County Medical Examiner’s Office, Prude’s death was ruled a homicide due to “complications of asphyxia in the setting of physical restraint.”

Following the release of the video Sept. 2, people have gathered in the streets of Rochester every night to protest what they allege was a cover-up by the Rochester Police Department because the death was not properly disclosed in a timely manner.

In response to the first night of protests, Mayor Lovely A. Warren suspended seven RPD officers with pay and conducted a press conference at City Hall Sept. 3.

While protests originally were destructive and violent the first few days after the announcement of Prude’s death, the marches have become peaceful with the participation of community elders, including several Sisters of St. Joseph. The community elders have been standing as barriers between the protesters and the police since Sunday.

“The Rochester Police Department would like to thank our local and state law enforcement partners for their assistance and a special thanks to Dr. Myra Brown and a group of community elders for keeping the protest safe and allowing everyone’s voice to be heard,” the RPD posted to Twitter following the Sept. 6 protest.