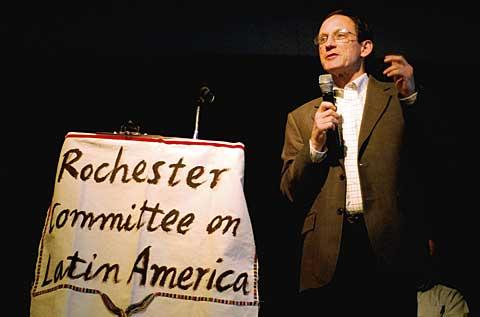 ROCHESTER — Dr. John "Lory" Ghertner initially rejected the White Dove award from the Rochester Committee on Latin America (ROCLA) when he first received the call to give him the news that he had received it.

"I turned it down because I don’t think I should be recognized for what’s been happening," he said prior to the March 19 award presentation, referring to the plight of local migrant workers and the local call for immigration legislation reform. "Recognition should be for all the people involved. … It should be for the farmworkers, the reason I’m here."

But Gail Mott, a ROCLA steering-commitee member, convinced him otherwise by telling him that his recognition would further the cause for farmworker justice, Ghertner added. The award recognized Ghertner’s efforts to stand up for Sodus-area farmworkers — many of who are Mexican — who were stopped by U.S. Border Patrol officers on their way to Mass at Church of the Epiphany. In 2008 Ghertner and other Sodus residents, and eventually members of several faiths, started a Church Watch group to stand watch so the workers could attend Mass. He also helped develop Migrant Support Services to advocate and provide support for the emergency needs of these workers and a Kids for College program that provides migrant students with support and encouragement to pursue college studies .

During the 22nd-annual Rice and Beans dinner held at the Downtown Presbyterian Church, ROCLA also recognized Ursulan Sister Dianna Ortiz, founder of Torture Abolition and Survivors Support Coalition International, with its International White Dove Award. Sister Ortiz, whose story is told in The Blindfold’s Eyes: My Journey from Torture to Truth, was not able to attend because of a family situation. Malcolm Bell, an attorney writing a book that includes Sister Ortiz’s story, accepted her award and also was honored with a White Dove Award.

"We just raise up somebody local and somebody international who has been significant in working for justice, particularly peace with justice," Mott said during a phone interview March 18.

In an e-mail statement, Sister Ortiz said that she also shared the award with others who have suffered as she did when she was kidnapped and tortured in Guatemala in 1989. During the Rice and Beans dinner her story was recounted through Bell and news clips that were shown.

"This award comes not to me alone but to all those who, although tortured, would not yield to their torturers but instead have used their indescribable experience as motivation to confront torture wherever it occurs in the world," stated Sister Ortiz, who currently is director of Pax Christi USA’s Washington office. "As I receive the White Dove Award, those standing with me will include my sisters and brothers whose screams I heard in a clandestine Guatemalan torture chamber. I promised never to forget them. The work I do on behalf of human rights is an effort to keep that promise."

In awarding the local White Dove award to Ghertner, Mott called him "justice in action." Ghertner said he was humbled by the award.

"A lot of people deserve this equally as much as me," he said and went on to list his wife, Nancy, Gail and Peter Mott, Sister of Mercy Janet Korn, Ruth Putnam Marchetti from Catholic Charities and many other people in attendance.

Ghertner was the first resident to react to the injustice of a migrant being picked up by Border Patrol as he traveled on his bicycle to Sunday Mass at Church of the Epiphany, Sister Korn said in a March 24 e-mail.

"John is not a Catholic but he took very much to heart the injustice done to this migrant worker and on his own developed what came to be known as the Church Watch," she noted. "He called the larger community together to stand with the migrant community, irrespective of race and religion. He sent the word out to all the faith communities and generated a compassionate response from many local people."

With Migrant Support Services, Ghertner began to look at other issues relative to the migrant community, such as how to help families whose relatives were deported or how to find relatives who have been detained, added Sister Korn, director of urban ministry for the Diocese of Rochester’s office of Parish Support Ministries. He also organized prayer services, demonstrations at the Border Patrol offices, talks and walks, and also coordinated food distribution to more than 50 families who were unable to care for their own needs.

Ghertner aroused "the larger community to the injustices that were being inflicted on the farmworkers and the fear that was enveloping the migrant community," she remarked. "John lobbied the local officials, the state and federal legislators endlessly and at all times. He told the story of the plight of the workers to all those who would listen and to those who didn’t want to listen."

It was through his work as a rural doctor that he first came to know migrant workers, who were mainly African-Americans when he first started practicing medicine at the health clinic in Sodus more than three decades ago, Ghertner recounted to El Mensajero Católico. He further learned of the injustices they faced when many years ago his wife, Nancy, began work on the documentary After I Picked the Fruit, about the lives of migrant women.

As someone who grew up Jewish in Nashville, Tenn., Ghertner said that he is familiar with living separately from the mainstream community. By the time he was 18, Ghertner remarked that he had only entered about two or three non-Jewish homes. And he vividly remembers seeing many African-American women step off the bus to go to their jobs as maids, he added.

"To be raised as a Jewish person in the South, it gives you a different sensitivity," said Jim Wood, a friend of Ghertner’s for 30 years who noted that Ghertner’s White Dove award was well-deserved.

Ghertner came to the Rochester area when he was offered an internship and residency at Strong Memorial Hospital. He later went on to become medical director for the Wayne County Public Health Department and would go out to the migrant-worker camps.

"That’s when I really saw what it was like," he said. "But it was really my wife who got me emotionally involved because of her project with her film."

He relates his commitment and his passion to fight for a just federal immigration policy to the sense of obligation that would force a doctor to stop at an accident on the side of the road.

"It’s exactly the same thing," he added."How many times are you going to see your neighbor pulled over, with handcuffs behind his back before (you) say enough is enough?"