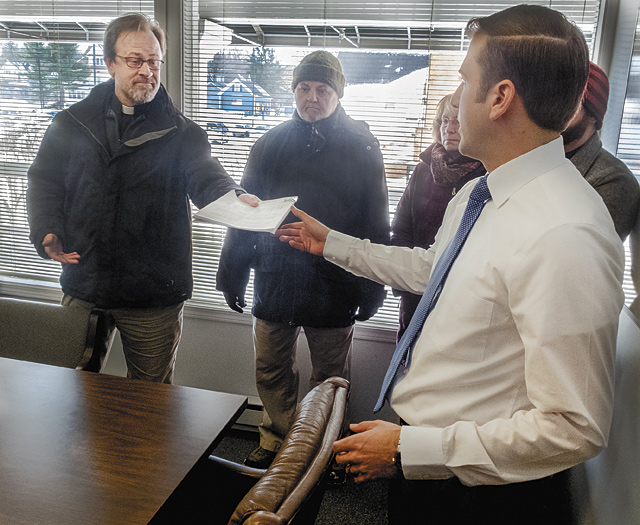 The Rev. Doug Stewart of Lutheran Church of the Incarnate Word hands postcards to Jesse Sleezer, spokesman for state Sen. Richard Funke, at the senator's Fairport office March 16. More than 2,000 postcards were written by members of local churches and collected through Rochester ACTS' Raise the Age campaign, which supports raising New York's age of incarceration and criminal responsibility.Catholic Courier Photo by John Haeger

FAIRPORT — Members of the Rochester ACTS interfaith social-justice coalition said the time has come for New York to “Raise the Age” of when youth offenders are prosecuted as adults and state officials have agreed.

The state legislature and Gov. Andrew Cuomo have agreed to include legislation to raise the minimum age of prosecution to 18 as part of the state budget, according to information at nyassembly.gov.

Jon Greenbaum from Roc/ACTS said the group’s many phone calls, press conferences, emails and letters to the editors in support of Raise the Age finally worked.

"We look forward to meeting with county leaders to discuss the implementation of the new system," he said.

The Roc/ACTS members held a press conference March 15 at Packett’s Landing — a location that includes the office of state Sen. Rich Funke (R-55th district that includes parts of Rochester and several eastern Monroe County towns). They called on state officials to pass legislation that would raise the minimum age of prosecution to 18.

Following the press conference, the Roc/ACTS members walked into a conference room in Funke’s office and presented his staff with more than 2,000 signatures in support of the legislation. New York and North Carolina are the only states that prosecute 16- and 17-year-olds in adult courts and place them in prisons with adults if convicted. North Carolina was poised to pass its own bill last month, according to news reports.

"We are thankful that so many people are getting on board on this issue of justice and fairness," said the Rev. Doug Stewart, pastor of Incarnate Word Lutheran Church in Rochester. "Clearly, we’re all working together on this on the right side of history."

Funke has opposed the legislation in the past because of questions about the legislative proposal but not about its merits, said spokesman Jesse Sleezer.

Questions had remained about funding for additional juvenile facilities that may need to be built, family court dockets, transportation for youths and other issues that have been part of ongoing negotiations during the state budget review process, Sleezer added. Gov. Andrew Cuomo included the legislation in his budget proposal.

These are some of the more than 2,000 postcards delivered to Sen. Rich Funke’s office in Fairport March 16 as part of Rochester ACTS’ Raise the Age campaign, which supports raising New York’s age of incarceration and criminal responsibility.

"There are a lot of conversations that have been ongoing to determine what’s the best way to go about doing this," he said.

Regardless of those reservations, the state cannot continue to treat youths as adults, Roc/ACTS members said during the press conference. Rev. Stewart added that he is certain no state official wants New York to be the last to "Raise the Age."

According to information gathered by the Raise the Age NY coalition (raisetheageny.com), nearly 28,000 youths ages 16 and 17 were arrested in 2016 and faced potential prosecution as adults in criminal court, and 72 percent of those charges were for misdemeanor crimes. More than 70 percent of those juveniles under arrest — and 80 percent sentenced to adult incarceration — were black or Latino.

Local and state advocates say approving the Raise the Age legislation would benefit juveniles, as well as the larger community, for the following reasons:

* The juvenile system provides greater opportunities for rehabilitation than incarceration with adults, as youths’ brains are still developing and respond positively to interventions.

* Youths in the adult criminal system are 50 percent more likely to be attacked with a weapon, and twice as likely to report being hurt by staff.

* Youths housed in adult facilities are 36 percent more likely to commit suicide than those in juvenile facilities.

* Youths housed in adult facilities are 34 percent more likely than youths in juvenile facilities to be arrested again for felony crimes, including violent crimes, and 80 percent of youths released from adult prisons commit other more serious crimes.

The proposed legislation also keeps in place serious consequences for youths who commit violent crimes, as cases would still begin in criminal court and only move to family court upon a district attorney’s recommendation, according to the information from the Raise the Age NY coalition.

"This is a very pivotal age where (youths) will form their identities based on who they’re around," Dr. Henry Cretella, a child and adolescent psychiatrist and a minister, said during the March 15 press conference. "The last thing we want is to have them around adult criminals. … From a moral standpoint, it’s almost unconscionable not to (pass Raise the Age). It’s embarrassing. But embarrassment is not important. What’s important is that it’s done and done in the right way."