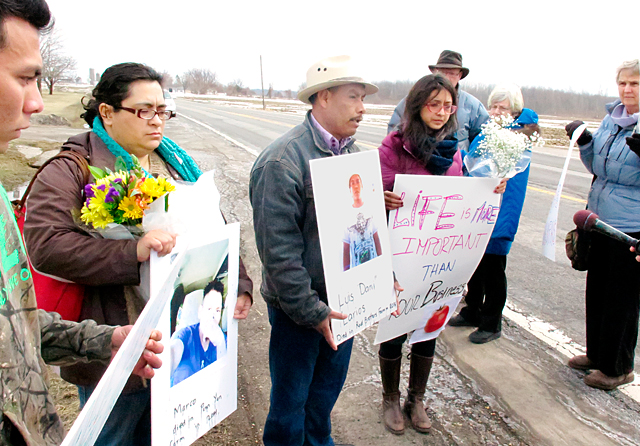 ALBION — When Daniel Larios Hernández reached the edge of the field where his 25-year-old son, Luis Larios Hernández, died last summer, he bowed his head and silently wept.

Moments later, after he and a group of immigrant-rights activists laid flowers at the site and prayed the "Our Father," Hernández walked over to a car and sobbed.

Hernández came to the area March 20 to commemorate his son’s death and to call for safer conditions for farmworkers who come to the United States to support their families, as his son did. His son, who came to the area as a seasonal worker with an H2-A visa, leaves behind a daughter who turned 4 in February.

He described his son as being close to his family, caring to others and smart.

"He was very responsible, very respectful of the law," Hernández said of his son. "He respected all people and treated them equitably."

Hernández’s emotional journey began last Aug. 29 when his son’s coworker told a relative that Luis Larios Hernández had died in a farming accident on Densmore Road. The coworker’s relative then notified the family in Jalisco, Mexico.

Luis Larios Hernández was in Albion as an H2-A worker for Roots Bros. Farm. It was his fifth stint in the United States, said his father, who added that a representative from Roots Bros. never contacted him regarding the death. The company did not respond to El Mensajero Católico’s requests for comment.

Luis Larios Hernández died after a parked farm truck rolled down a slight incline and pinned him against a second parked truck, according to several news reports.

A citation from the U.S. Department of Labor’s Occupational Safety and Health Administration, which Hernández shared with El Mensajero Católico, stated that at the time of the accident, the workers were harvesting and sorting tomatoes and were exposed to hazards while standing and walking between trucks. The trucks were stopped back to back "without the assurance that the trucks cannot roll backwards," according to the citation.

OSHA fined the company $7,000 for the "serious violation" by not providing a place of employment free of "recognized hazards," according to the citation.

Mike Scime, area director for OSHA’s Buffalo office, said that the matter has been resolved with the Root Brothers, who agreed to comply with the recommendations made in the citation. The recommendations include providing training for workers during harvesting regarding walking between vehicles, training drivers not to park in sloped or incline areas, providing wheel chocks for harvesting trucks and developing a preventative maintenance schedule for trucks, particularly in regard to emergency brakes.

Scime added that OSHA has not yet checked on whether the farm operation has complied with the recommendations since growing season is yet to begin.

"The most important thing is to ensure it doesn’t happen (again) going forward," he said. "It (the accident) shouldn’t have occurred in the first place."

But the violations are too common in farming, said Rebecca Fuentes, an organizer with the Workers’ Center of Central New York who accompanied Hernández during his visit as a sign of solidarity with farmworkers. Staff from the Worker Justice Center of New York also traveled with Hernández and arranged a meeting with OSHA officials.

"Farmwork is one of the most dangerous industries to work in," she said during a March 20 press conference in front of Root Brothers Farm on West Lee Road. "What are the consequences to the family, the community? How do we want to think about our food? … Remember the families who can’t speak for themselves."

Just treatment should include reaching out to families following a death, said Paola Betchart with the Worker Justice Center of New York. After Hernández received the second-hand information about his son, his daughters confirmed the news online, Hernández explained. And they were left in disbelief because his son had been familiar with trucks.

Hernández then had to arrange his own visit and had a difficult time obtaining a death certificate because his son’s body was immediately turned over to a funeral home, he said. He said that he eventually obtained the certificate to obtain a visa to travel to the Rochester area and had to sell two cars to raise enough money for the plane ticket.

Betchart said that the family has few options for legal recourse in New York, which prohibits a wrongful death suit against an employer, other than a workers’ compensation claim and a potential third-party suit against the truck company. But Hernández said that he just wants to know what really happened, and he feels the company’s fine was too low. Scime noted the fine was the maximum allowed for such a violation.

"I just ask that a more in-depth investigation take place," he said.