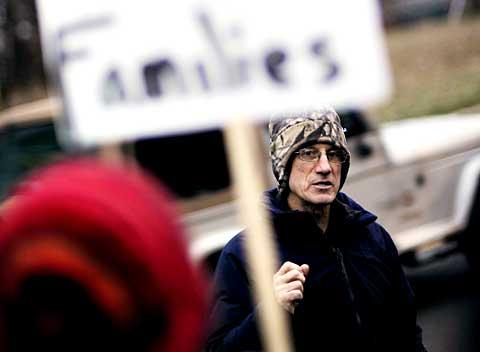 ROCHESTER — A group of Wayne County residents has filed a complaint against U.S. Border Patrol agents who the group claims have been engaging in racial profiling and harassing tactics.

Nine alleged incidents of misconduct were detailed in a letter the residents sent Nov. 3 to the U.S. Department of Homeland Security, which oversees Border Patrol, and to the department’s offices of Inspector General and Civil Rights and Civil Liberties. Another copy of the letter was sent to the U.S. Department of Justice’s Civil Rights division.

Dr. John "Lory" Ghertner of Migrant Support Services of Wayne County — who signed the letter along with Peter Mares from Catholic Charities of Wayne County — announced the filing of the complaint during a Dec. 14 rally in front of Border Patrol’s Pattonwood Drive office. The rally also commemorated the 61st anniversary of the United Nations’ Universal Declaration of Human Rights.

"The ball is in their court," Ghertner said in a Dec. 10 interview, referring to the federal agencies with which the group filed its complaint. Homeland Security’s Office for Civil Rights and Civil Liberties has responded with two letters to the group of Wayne County residents, one explaining its investigation methodologies and the other stating that it would review the allegations with Border Patrol, Jackson Chin of New York City’s Latino Justice/the Puerto Rican Legal Defense and Education Fund said on Dec. 16. Chin helped the group formulate its letter.

"We’re waiting for them to investigate (the complaint) or change the (enforcement) policies," Ghertner said.

Greg Knull, from the Pennsylvania field investigation office of Homeland Security’s inspector general, said he could not confirm that the complaint had been received.

"We make no comments on investigations, whether they are open or closed, and we don’t confirm whether we do have an investigation," he told the Catholic Courier on Dec. 14.

A.J. Price, supervisory Border Patrol agent for northwestern New York and Pennsylvania, told El Mensajero on Dec. 14 that he was not aware of the complaint. After learning from El Mensajero that the complaint also was sent to the Justice Department, Price said he could not comment when asked about one of the nine incidents outlined in the letter.

That incident related to the Sept. 29 arrest of Gerardo Vázquez, a native of Mexico who is now a U.S. citizen and has lived in the Sodus and Oswego areas for 20 years. Vázquez lives in the City of Oswego and owns a store in Fulton.

During a Dec. 13 interview, Vázquez’s wife, Cherrie, described the incident that led to her husband’s arrest. She said she and her husband were following their usual Tuesday routine, driving from their home to drop off their two children at school in Oswego then continuing on to Sodus to pick up merchandise for their store.

They were parked on Draper Street when they saw behind them a Border Patrol van with flashing red lights. Cherrie Vázquez said that when her husband handed his driver’s license to the Border Patrol officers, they referred to him by his two last names — Vázquez Mentado — even though only the name Vázquez appears on his license. She said the officers accused him of being in the country illegally, but would not respond as to why they pulled up behind the couple’s vehicle.

Cherrie Vázquez said one of the officers told the couple that he was placing Gerardo Vázquez in handcuffs because the officer felt threatened. She further claimed that when she tried to put up her husband’s hood because it was raining that day, an officer pushed her away.

Gerardo Vázquez was taken to the Oswego Border Patrol station and held until Cherrie Vázquez was able to bring in his citizenship papers. Her husband was released an hour and a half later, she said.

"If they had just run his license, they would have realized he was not an illegal alien," Cherrie Vázquez said. "We told them he was legally in this country, and they (officers) would not listen. … Their tactics need to change."

"The harassment was clear (in this case)," Ghertner noted. "It couldn’t have been anything else."

The complaint letter from Ghertner’s group addresses the concern and outrage Wayne County residents have felt regarding such tactics.

"Over a continuous period of at least two years, we, as local residents from diverse occupations and backgrounds, have become alarmed and agitated over the actions and misconduct of DHS Border Patrol and law enforcement staff. US Border Patrol agents use abusive, aggressive, and demeaning behavior in stopping, interrogating, arresting and detaining foreign nationals and lawful residents and U.S. citizens," the letter asserts. "Given a series of scenarios, there can be no doubt that US Border Patrol agents have routinely engaged in racial profiling in violation of US Justice Department policy and the US Constitution."

Ghertner said that he and Latino Justice’s Chin met more than a year ago at a forum in Syracuse, during which he brought up some of the incidents. Chin approached him and began discussions over several months. Wally Ruehle, an immigration lawyer with the Legal Aid Society of Rochester, also is working with the group.

"It takes forever to get anybody to believe the stories we tell," Ghertner remarked. "But we kept sending him (Chin) cases and documenting them. He finally started to believe us."