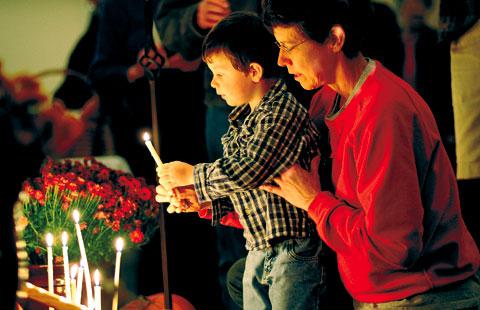 ROCHESTER — Francisco Basilio could hardly believe the support for migrant workers that was on display during an Oct. 21 prayer vigil at St. Mary Church.

"We didn’t expect the people to receive us like this," said Basilio. "We need such help. Not just for me, but for all (farm workers). … They are not being heard. They are afraid."

Basilio, who works in Sodus, understands that fear. But he and his family attended the vigil because the more people understand the plight of migrant workers, the better chance there is that things could change, said Basilio.

"Anything is possible," he said.

Basilio, his wife and three children came to Rochester for the first time since they moved to the area more than a year ago. They were accompanied by Peter Mares, an outreach worker for Catholic Charities of Wayne County who manages the Sodus residence La Casa, which recently celebrated its fifth anniversary. The Basilio family lived for three months in La Casa, which provides temporary residence for migrant workers when they arrive in the area.

"Thanks to La Casa, we are able to get ahead," said Basilio.

During the Oct. 21 vigil, Mares talked about the situation of his family, as its members stood around him at a lectern in front of the altar.

"Because of the economic conditions of the world, the family was forced to uproot themselves and ended up in Sodus," he said. "Now, they are part of the community."

The vigil was a joint event between the Dugan Center St. Mary and the Justice for Farmworkers campaign led by Rural & Migrant Ministry, said Anne-Marie Brogan, the church’s pastoral administrator. The program concluded with the more than 50 people in attendance walking up to the altar, lighting candles and placing them in bowls alongside a wooden cross that lay on the altar steps.

Katie Kantz, the church’s social-justice coordinator, said she chose immigration as the focus for the church’s October’s "Respect Life" theme to create awareness about the struggles of migrant workers who live and work in the area. Each week, the church offered speakers and films about the issue.

Migrant workers "provide a service for us all," she said. "We want to create awareness and try to help, because with awareness comes an obligation to do something."

St. Mary’s program was one of 10 candlelight vigils organized by the Justice for Farmworkers campaign across the state during October, to urge passage of the Farmworkers Fair Labor Practices Act. This proposed New York legislation would provide for farmworkers the same labor protections that other workers receive, including overtime pay, a day of rest and the right to collective bargaining. The bill passed the Assembly in June but remains in committee in the Senate.

"People across upstate have become disillusioned with and frustrated by our state’s political process, but these vigils were a reminder to all involved that important — even historic — decisions hang in the balance," said Jordan Wells, coordinator for the Justice for Farmworkers campaign.

During the first of the 10 vigils, which took place in Albany on Oct. 15, Bishop Howard J. Hubbard of the Diocese of Albany, expressed his support for the legislation. Bishop Hubbard is also chairman of the committee on international justice and peace for the United State Conference of Catholic Bishops.

"From the Book of Genesis to the last line of the New Testament, the Scriptures tell us that every person has been endowed by God with a transcendent dignity that is unique, sacred and inviolable," he stated in information from Justice for Farmworkers’ office. "From this sacred worth, there flow the basic human rights to food, clothing, health care, education and employment."

Labor-rights advocates have been fighting for passage of the legislation even before 2003 when Marilu Aguilar said she walked from Rochester to Albany in support of the farmworker bill.

"This is a matter of justice and in keeping with Catholic social teaching," she said. "This (vigil) is a great opportunity to talk about this farmworker issue because farmworkers have been kept isolated and invisible for so long."

Mario Escalante, former executive director of the Spanish Action Coalition, agreed. The native of El Salvador worked with migrant workers in the Migrant Education Program at the State University of New York at Brockport when he first came to Rochester in the 1980s.

"It’s a good faith effort by religious people who believe in justice," he said of the vigil. "It gives us hope … that things are going to get better."