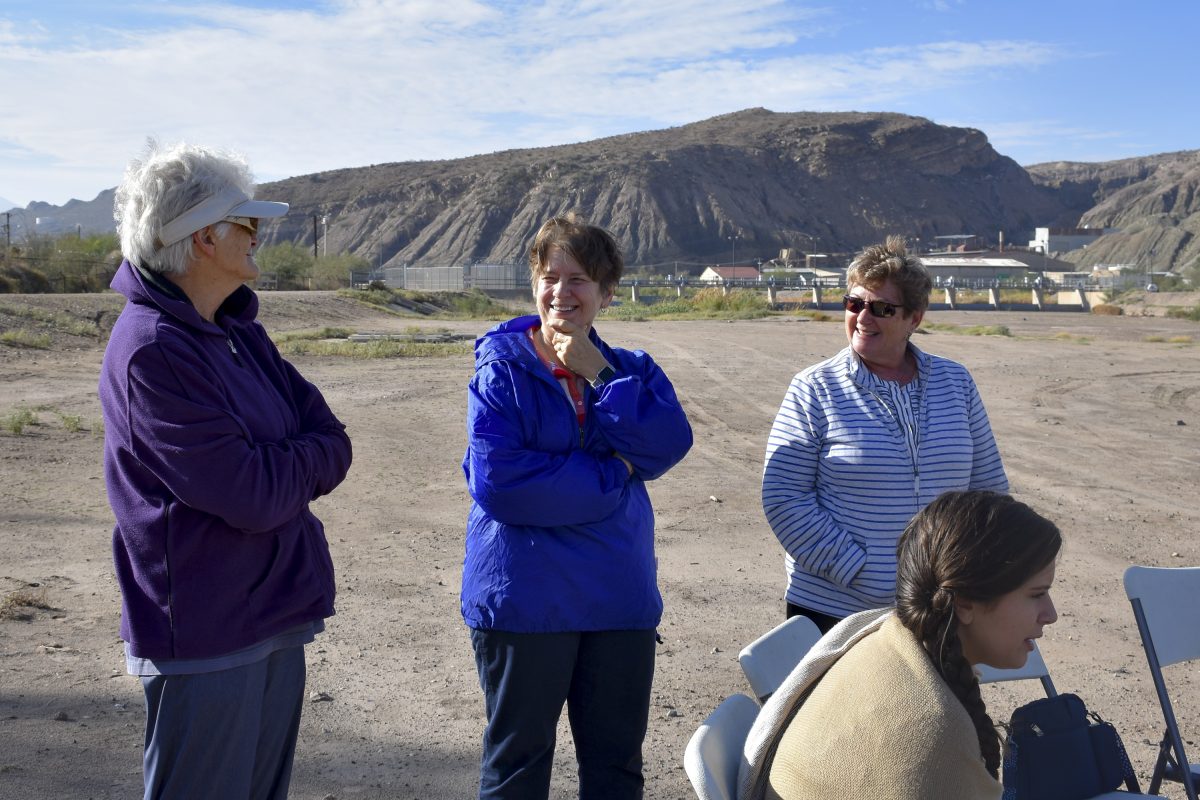 A trip to the U.S.-Mexico border this fall opened the eyes of Mercy Associate Barbara Quinlan Giehl to the reality of immigration issues she had previously only read about.

“It was an amazing trip,” she told El Mensajero Católico on Nov. 14, two days after returning from a one-week immigration immersion experience in El Paso, Texas, and Juárez, Mexico.

The Sisters of Mercy of the Americas sponsored the trip, said spokesman Bob Keenan, in coordination with the Missionary Society of St. Columban.

The trip included a visit to Annunciation House in El Paso, which is a nonprofit organization that provides services for immigrants and people living in poverty; observation of proceedings in immigration court; discussions with U.S. Customs and Border Patrol officers who work along the border between El Paso and Juárez; and a visit to a detention camp run by the federal department of Immigration and Customs Enforcement.

“The goal of the Border Immersion Experience is to humanize and show the faces and lives of immigrants — the struggles they face, the push-factors that drive them from their home countries, and how they are treated when they arrive in the United States,” Keenan told El Mensajero in an e-mail. “This experience also reinforces the commitment of the Sisters of Mercy of the Americas to immigrants and refugees, calling for an end to detentions, deportations, and the hateful rhetoric targeting immigrant communities.”

One of the most eye-opening experiences for Quinlan Giehl was seeing the physical wall that already stands between El Paso and Juárez. Seeing the wall was shocking after hearing so much political rhetoric about building one, she said.

“I wasn’t aware that there already was a big, huge … wall,” she said.

Also shocking was the extreme poverty she saw when the group simply crossed a bridge between the two countries, said Quinlan Giehl.

“Juárez, Mexico, is so very poor — it’s a Third World country,” she said. “And the violence and killings; there are 10 murders a day in that little area of Mexico.”

She said the women her group met told gut-wrenching stories of the violence inflicted on them, and noted that hearing those stories added to a feeling of heaviness she felt for most of the trip.

“Some of it was overwhelming,” Quinlan Giehl said. “You just think, ‘Some people dedicate their whole lives to this (immigration issue). What can I possibly do?’ ”

But then she remembered a quote from Father Daniel Barrigen, a Jesuit priest who was an active anti-war activist and poet: “One cannot level one’s moral lance at every evil in the universe. There are just too many of them. But you can do something, and the difference between doing something and doing nothing is everything.”

“Each one of us can do something,” Quinlan Giehl said. “Part of what I want to do is bring back this information and spread it and tell other people what we saw, what’s really going on.”

Meeting with people on both sides of the border who are working to make life better for the people on each side gave Quinlan Giehl hope, she said.

One woman she met is a doctor who runs a clinic for migrants in Juárez where she charges $2 at most for a visit, she said.

Another woman in Juárez started a children’s library out of her home 19 years ago and since then has helped 46 children go on to graduate from college, and she does it all with private donations, Quinlan Giehl said. Most of the children in Juárez are being raised by single mothers, so access to a good education is limited, she noted.

“Besides helping with school work and reading, this (woman) provides them with a meal,” she said.

Quinlan Giehl also experienced another moment of hope and light during a vigil — in the total darkness of the desert — with about 2,000 people outside an ICE detention center.

“We were shocked at the sight of it, it’s huge,” Quinlan Giehl said of the detention center. “We had candles, flashlights. It was pitch black and we sang songs and chanted. … The lights in the detention center started flicking on and off. The individual detainees started responding to us and letting us know they knew we were there.”