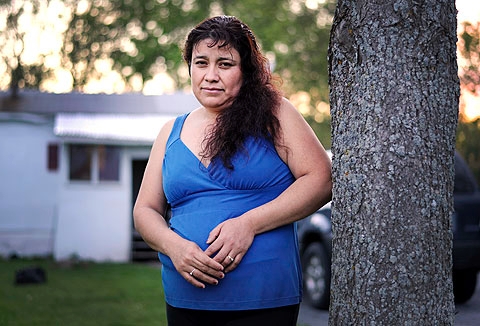 ALBION — Jonathan Cruz seems like a typical high-school senior. He likes to play soccer with his friends. He does well at school, and has applied and been accepted to college.

But the fate of this 18-year-old Albion teen lies in the hands of Immigration and Customs Enforcement officials.

Cruz is an undocumented immigrant who was stopped by an Orleans County sheriff’s deputy last summer as he was driving to a soccer match at a local park. He could not produce a driver’s license or any other identification, and eventually Border Patrol was called in, he said.

Following initial proceedings in Buffalo, Cruz was given a March 2013 date to return for a deportation hearing. Meanwhile, he hopes to start classes at Monroe Community College in the fall.

"I continue to do what I do every day: go to school and play sports," he said during an interview at his mother’s mobile home on March 14. "And I wait until a law passes so I can stay and study."

Cruz is one of an estimated 65,000 youths awaiting passage of the Development, Relief and Education of Alien Minors Act — otherwise known as the DREAM Act — which would grant them conditional legal status and thus not be subject to deportation, to http://dreamact.info.

The bipartisan legislation was first introduced in 2009 by U.S. Sens. Orin Hatch and Richard Durbin. Under the legislation, undocumented youths who qualify would be eligible over a six-year period to follow a path to citizenship based on conditions that they complete college degrees or serve in the military for two years.

To be eligible for the path to citizenship under under the proposed legislation, youths:

* must have entered the United States before the age of 16;

* must have been present in the United States for at least five consecutive years prior to enactment of the bill;

* must have graduated from a United States high school, obtained a GED, or been accepted into a college or university;

* must be between the ages of 12 and 35 at the time of application; and

* must have good moral character.

A revised version of the bill is expected next monthfrom Sen. Marco Rubio of Florida, who is among several possible candidates to become the vice presidental nominee on the Republican ticket. Although the Florida senator has released few details, Rubio’s proposal — like the Hatch-Durbin proposal — is expected to help youths brought to the United States as children stay in the country legally if they attend college or serve in the military but doesn’t offer a path to citizenship, according to http://dreamact.info/forum/archive/index.php?t-26945.html.

Poll results released in March by Fox News Latino show that 90 percent of Latino voters nationwide said that they support the DREAM Act. Full results of the poll can be found at http://latino.foxnews.com/latino/politics/2012/03/08/fox-news-latino-poll-latino-voters-full-results.

In New York state, meanwhile, legislators are working on the creation of a DREAM Act fund to provide scholarships for the children of immigrants, regardless of whether they entered the country legally, according to information from the state’s Puerto Rican/Hispanic Task Force. Under the proposal, applicants would be required to show valid Social Security numbers, tax identification numbers or employee identification numbers. Currentlyk in New York, undocumented aliens may obtain tax identification numbers for purposes of paying state income tax.

Until passage of some version of the national DREAM Act, however, the best-case scenario for kids like Cruz often is to be in the system, according to U.S. Border Patrol Deputy Chief Patrol Agent Daniel R. Hiebert, who heads up the organization’s Buffalo sector overseeing the Rochester region.

If Cruz’s case were to be dismissed, for example, he would be vulnerable to being picked up again and being deported, Hiebert explained. But if he goes before a judge, Cruz could receive some kind of status to allow him to stay in the country, he added.

Additionally, if the DREAM Act were to pass, the federal office of Citizen and Immigration Services — which, along with U.S. Border Patrol, is part of the U.S. Department of Homeland Security — would review pending cases to see if they quality for the act’s provisions, Hiebert said, noting that such a review would benefit a juvenile whose case was still being processed.

"If they’re already in the system, it (the process) goes that much quicker," he remarked.

Cruz said that passage of the legislation would be a dream come true. He was a young child when he first moved to the area and was soon enrolled in kindergarten. His younger brother, Jessy, was born here and is now 11.

"It would change everything" for the better for the family, Cruz said.

After MCC, he would like to obtain a bachelor’s degree and go on to medical school. In the short run, he said he hopes to find a summer job to help pay for some of his college costs this fall.

All of his savings from working in previous summers went toward fees associated with the traffic stop last July 4, he noted. When he talks about that day, Cruz acknowledges that he was speeding. But he didn’t grasp the gravity of the situation for his entire family until the deputy asked where he was from. Although he knew he had to tell the truth, he felt terrible because his mistake also implicated his mother, Maria Pacheco, Cruz noted.

"My mom had to turn herself in (for being in the country illegally)," he said, adding that he was told he would be put into the foster-care system if she did not do so.

"I just panicked," Cruz added. "And I felt fear for my mom because I had done something to get her in trouble too."

Pacheco said that she came immediately to the Orleans County sheriff’s station, and she and her son were both transferred to Border Patrol agents at the Border Patrol station on Pattonwood Drive in Charlotte.

Following the ordeal, Pacheco said she received an order of supervision, which means she must report by phone once a month to Immigration and Customs Enforcement officials in Buffalo. Hiebert said the order was an appropriate ruling because Pacheco has ties to the community and her two sons.

Pacheco and her former husband, Jésus Cruz, moved to the area from Mexico City in 1999. Her husband returned to Mexico last year around the same time that her son was arrested.

She said she has retained lawyer Anne Doebler to work on her son’s case. Doebler could not be reached for comment at press time.

Pacheco said that she prays for the DREAM Act’s passage. But if it doesn’t pass in time to help her son, she added that she hopes the court takes mercy on him and he is able to stay in this country.

"My hope is that he will be granted residency or even citizenship since he has no criminal record," she said. "We shall see what happens."