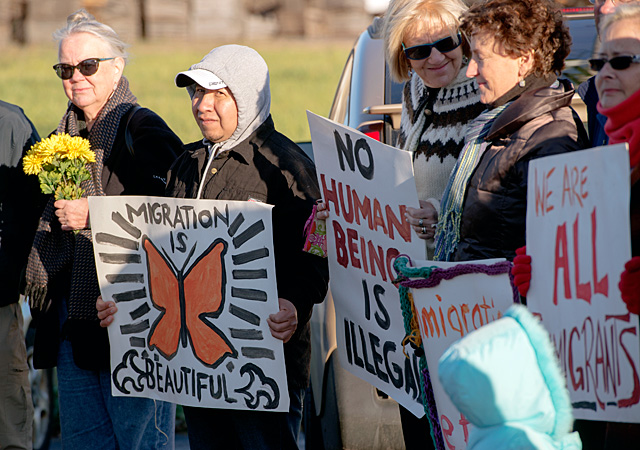 In addition to the relief that undocumented immigrants received upon the president’s recent executive order, upstate activists were successful in having the New York State Police review its manual and training policies regarding interactions with such immigrants.

That success was the result of two years of work by a coalition of community members, immigration activists, college professors, lawyers and the New York Civil Liberties Union (NYCLU), explained Katie Tinto, an assistant clinical professor of law at the Cardozo School of Law in New York City.

As part of the group’s work for the Kathryn O. Greenberg Immigration Justice Clinic, law students collected accounts from immigrants, Tinto said. The clinic has been working on immigration reform for six years, according to http://cardozo.yu.edu. The NYCLU also conducted research on traffic stops involving undocumented workers when troopers called in U.S. Customs and Border Patrol, she said.

The NYCLU reports along with personal stories from such workers about their experiences with state troopers were presented to the state police superintendent and counsel as well as representatives from the governor’s office during a Nov. 18 meeting in Albany, Tinto said. NYCLU did not respond to repeated requests for comment.

"Those accounts of community members really being traumatized and victimized by what we believe were improper police procedures … really resonated," Tinto said. "More than just stats, the sharing of personal accounts of what happened to them, I think that was powerful."

The state police met with NYCLU and community members to hear their concerns as part of ongoing efforts to improve community relations, state police spokesperson Darcy Wells said in an e-mail. Subsequent to the meeting, manual and training policies regarding undocumented workers are under review, she added.

"And, as with all our policies, we on occasion make clarifications and reinforce as we deem necessary to ensure our (police) members understand expectations and legal requirements," Wells said. "We do plan on ensuring all of our personnel understand their responsibilities through our training division."

Tinto said that the coalition hopes to review the revisions and that the changes are swift.

The issue came to a head in late fall when it seemed that many farmworkers were being targeted by state police and being pulled over and detained, as Border Patrol was consistently being called in for these stops, explained Carly Fox with the Worker Justice Center.

She along with Dr. John "Lori" Ghertner and Peter Mares from diocesan Catholic Charities organized a Nov. 2 march to the state police’s barracks in Williamson to deliver a letter calling for troopers to put an end to what they saw as racial profiling. Ghertner said that the points in the letter were emphasized in a follow-up meeting with local troopers that such profiling, which is outlined in the state police manual, has been proven unconstitutional and should stop.

One of the workers who took part in the Nov. 2 march and the Nov. 18 Albany meeting was Dolores Bustamonte, who was detained in October following a traffic stop for alleged speeding on her way to church. When the trooper asked if she had papers, she told him she did not have to answer, Bustamonte explained.

He then put her on a phone call with another person who spoke Spanish who turned out to be from Border Patrol, she said. That officer also asked if she had legal status, and again she said she would not answer.

And even though she explained that her 14-year-old daughter, who was in the car with her, had no one to stay with her, Bustamonte said that she was still put in handcuffs and taken to the nearby state police barracks.
She was then driven to the Batavia Federal Detention Center and was en route to another facility with an officer from Immigrations and Customs Enforcement when she was told that she was going home.

Fox said that she was on the phone with anyone she could think of to help Bustamonte, even threatening to hold an emergency press conference to expose the police actions detaining a single farmworker woman with a child.

"What she did for me was incredible. I did not expect that," Bustamonte said of Fox’s intervention. "We simply want to work. We are not hurting anybody."

Fox said that she admires Bustamonte’s courage to speak out about her experience during the Albany meeting, as many workers fear retribution from farmers or police for doing so.

"The people who risked going there (Albany) and standing up, those directly affected and pulled over by police showed amazing leadership and strength," Fox noted. "We want more people like that. We want allies to stand in solidarity with us the way they did."