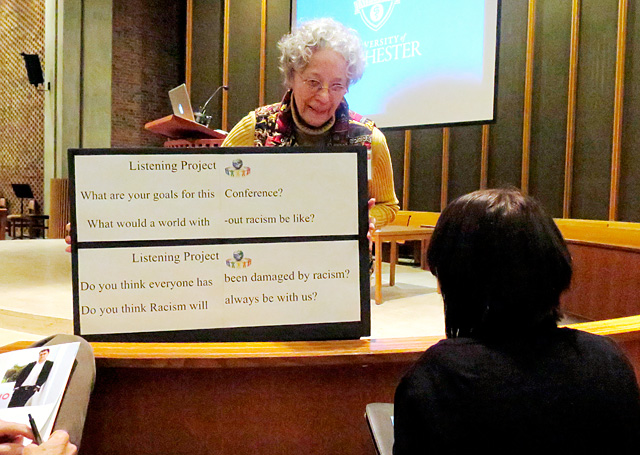 ROCHESTER — As someone who moved to this country as a child without papers, Raul Ramírez related closely to Jose Antonio Vargas’ story of living in the United States as an undocumented immigrant.

Vargas, who moved to California from the Philippines at age 12 to live with his grandparents, told of his journey April 17 as the keynote speaker during the sixth-annual Diversity Conference at the University of Rochester. The conference’s theme was "From Bystander to Ally."

More than 600 people attended the daylong event, which after Vargas’ presentation included workshops on a variety of topics including "Myths and Misperceptions of Immigration."

"His story really spoke to me," said Ramírez, 19, now a UR student with Deferred Action for Childhood Arrivals (DACA) status. "Growing up knowing you’re undocumented, you always have a fear of people finding out."

His father was almost deported in 2010 after being stopped when he was leaving work in Tennessee. He was taken to jail, and family and friends and their church helped raise the $5,000 needed to bail him out, Ramírez explained. Now, his parents are hoping that President Barack Obama’s executive action on immigration moves forward so they can remain in this country, he said. Ramírez has two sisters who were born in Tennessee.

Vargas said that the stories of young people like Ramírez is why he travels throughout the United States talking about his life and making films about what it means to be an immigrant in this country.

Before he revealed his undocumented status in a New York Times Magazine essay in 2011, Vargas had found success as a journalist and was part of a group of reporters from The Washington Post that won a Pulitzer Prize for covering the 2007 Virginia Tech shootings. During his UR address, he joked, "Didn’t the (Pulitzer) committee check that my Social Security number was invalidated?"

He chose to reveal his status after seeing young undocumented immigrants tell their own stories on YouTube while he remained a "coward."

"If you’re undocumented, it’s (social media) the only place where you can actually tell people who you really are," he said.

So after being a bystander too long, he wrote the essay and waited for the other shoe to drop, but it never did, Vargas said. He had conferred with "27 lawyers" before taking the step and all had urged him not to reveal his status.

"I had paid all my credit card bills," he said. "And I started packing stuff."

But instead of hearing from any government officials, other national media picked up the story. He gave interviews and then again decided to continue the coverage on his own in a June 2012 Time magazine article. He even called Homeland Security for a comment, which no official ever gave. The article ran and featured 35 fellow undocumented immigrants on the cover, he said.

"So long as you can rely on cheap labor in this country, which it has relied on since the beginning of this country, you’re cool," Vargas remarked. "No comment. It’s too uncomfortable, right?"

He also went on to create "Define American," a nonprofit media and culture organization that aims "to elevate the conversation around immigration and citizenship."

Following the success of his "Documented" film, he is working on a television project with MTV about what it means to be young and white in America. He also is working on projects about Irish immigrants and Native Americans.

In conversations with young people for the MTV project, Vargas found they could not answer three important questions: Where are you from? How did you get here? Who paid?

"White is not a country," he said. "Until you can answer those three questions, I don’t think you have the right to call anybody illegal or talk about some border you don’t even understand."

After traveling to 45 states for 410 events in 190 colleges in four years, Vargas said that he has come to realize how disconnected and "largely uninformed our fellow Americans are on this issue."

"Power is a group’s ability to define reality," he added. "If that is a definition, then undocumented people who make this country what it is have no power (because) you don’t know certain facts."

According to the Social Security Administration, undocumented workers have paid billions into the system using fake numbers, he said. But the media narrative is that undocumented immigrants are crowding schools, taking away jobs and "speaking Spanish in your Walmarts as if there’s something wrong with that."

But facts don’t take the forefront when the conversation is framed by politicians, he noted.

"We are here because you were there, remember that," Vargas said. "Do you even know your own history?"

For the people who ask what is so hard about becoming a legal citizen, Vargas walks them through a naturalization form. The only question he can answer yes to is that he is older than 18. The other requirements — married to an American citizen, an unmarried person younger than 21 or the parent of an American citizen — leave him out completely.

"People seem to think all I have to do is walk into a city hall, fill out a form, sign a form, get in line and bump you in line and then I become an American citizen. Poof," he said. "If you think the American tax code is complicated, try to understand the immigration code in this country."

While he believes immigration reform is many years away — as late as 2024 he has been told by Washington insiders — his organization works on changing attitudes, Vargas said. One of his successes has been getting media to stop calling undocumented immigrants "illegals," he noted.

"We can’t change the politics of this issue unless we change the culture of this issue," he said. "Our job is to connect the struggle of immigrants today with the history of this country."