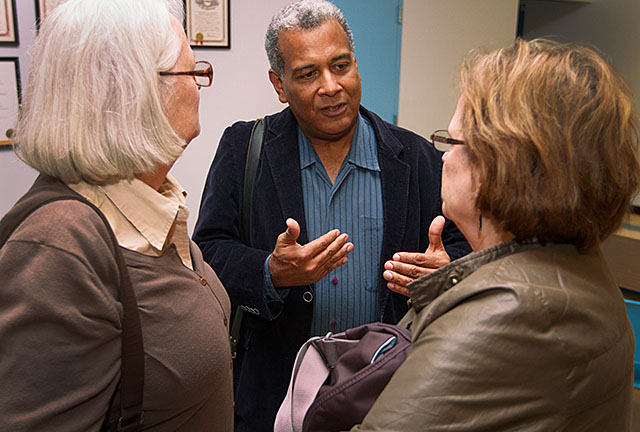 Luis Barrios talks with Grania Marcus, left, and Dorothy Romanet after speaking about the complexity of immigration policy Sept. 28 at Workers United Hall. An Episcopal priest and chair of the Department of Latin American Studies at John Jay College of Criminal Justice in New York City, Barrios was brought to Rochester by the Greater Rochester Coalition for Immigration Justice.

ROCHESTER — If U.S. residents would focus on the country’s foundation as a land of immigrants, there would be little disagreement about the need for federal immigration reform, a national activist said during forums held last month.

"If you’re not an indigenous person, someone in your family came here first, someone came from another country," said the Rev. Luis Barrios, a professor at John Jay College of Criminal Justice in New York City. "We have a very selective …. memory."

And the immigrants who travel to this country — no matter if it was hundreds of years ago or more recently — are in search of a better life, said Rev. Barrios.

Rev. Barrios spoke during several gatherings during his Rochester visit at the end of last month coordinated by the Greater Rochester Coalition for Immigration Justice, which includes Rochester Committee on Latin America (ROCLA), the League of Women Voters, Rural & Migrant Ministry, the Interfaith Alliance of Rochester and the Worker Justice Center of NY.

Because the current wave of immigrants speaks another language and has brown skin, Rev. Barrios also spoke about combating the issues of racism that also inform anti-immigrant rhetoric, he explained.

"We are not in a post-racism society," Rev. Barrios said. "We are in the middle of a racist-ethnocentric society. … We don’t have "no blacks" signs on the doorway anymore. But people let you know that you’re not welcome. You can feel that."

And if one considers the history of this country, the United States made immigrants of people who lived in the territories that were taken from Mexico, he noted.

"They (workers) have a right to be here," Rev. Barrios said. "This is their land."

His visit took place a week before a statewide "March for Immigrant Dignity and Respect" held Oct. 5 as one of more than 170 events in 150 cities in 40 states to pressure Congress to pass immigration reform this year, according to http://oct5nyc.com/114/ .

The need for reform was part of Rev. Barrios’ presentation "Race in Immigration: Politics and Policy" Sept. 28 at the Workers United Hall as well as forums on race and immigration Sept. 29 at the Downtown United Presbyterian Church.

Gail Mott, a ROCLA member, said that she invited Rev. Barrios back to Rochester after hearing him speak last year during a Cuba "friendshipment caravan" stop in Pittsford. He is the codirector of IFCO/Pastors for Peace, which sponsors the caravans that bring medical supplies to Cuba.

"He lives his faith," she said. "He is about his Father’s business. He’s so real, so utterly honest and so full of hope. There is a light in his eyes, a light in his passion for justice that moves him."

A native of Puerto Rico, Rev. Barrios is chairman of John Jay’s department of Latin American and Latino/Latina studies. An Episcopal priest at a West Harlem Church, he also is the author of two books on the sociology of gangs and has done research on immigration policy.

His extensive knowledge makes him a powerful and charismatic speaker, said Deanna Tiefenthal of Rochester and member of Downtown United Presbyterian Church who heard him speak during a Sept. 29 forum.

In addition to reminding the audience about our country’s foundation, she said that Rev. Barrios also encouraged them to mingle with any groups they are interested in or feel they should find out more about.

"Don’t trust your assumptions," Tiefenthal added. "That is a good reminder. … because the last group in is the one that gets picked on."

This country can’t operate without immigrants and migrant workers, largely from Mexico and Guatemala, especially in this area and with this year’s bumper apple crop, she said.

"I hope they (farmers) find workers," Tiefenthal said. "It almost worked better before the crackdown on immigration when workers could go back and forth."