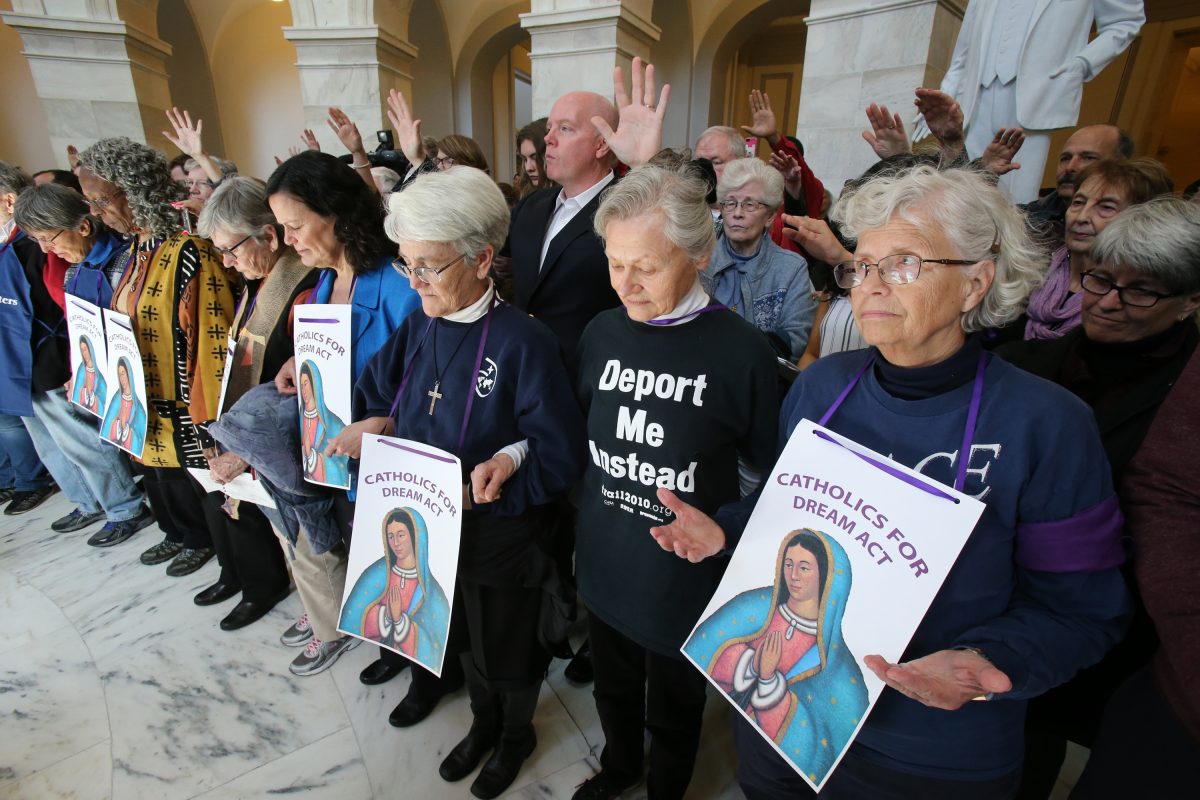 Sisters of Mercy and others pray inside the Russell Senate Office Building in Washington Feb. 27 during a "Catholic Day of Action for Dreamers" protest to press Congress to protect "Dreamers." (CNS photo/Bob Roller) See DACA-CONGRESS-CATHOLIC-LEADERS Feb. 27, 2018.

WASHINGTON — Dozens of Catholics — including a Sister of Mercy from Rochester — were arrested near the U.S. Capitol Feb. 27 in the rotunda of a Senate building in Washington as they called on lawmakers to help young undocumented adults brought to the U.S. as minors obtain some sort of permanent legal status.

After linking arms and refusing to leave the building, about 40 people were handcuffed with their hands behind their backs and placed on a bus with the windows covered and taken to a warehouse, Sister of Mercy Janet Korn, justice cominister for the Sisters of Mercy’s New York, Pennsylvania, Pacific West Community, told the Catholic Courier March 1.

There, she said, they police fingerprinted them as part of processing their arrests, which took about three hours. During that time, the police chief informed them he has an aunt who is a Sister of Mercy, she said. After paying a $50 fine, they were released, Sister Korn added.

Having worked with immigrants throughout the years, Sister Korn said she felt she had to do something to support the young undocumented immigrants known as “Dreamers,” which is a reference to the DREAM Act, one of the proposed pieces of legislation that could help them stay in the country legally. Dreamers also took part in the “Catholic Day of Action With Dreamers,” organized by the PICO National Network, a faith-based community organization based in California.

After the arrests, Sister Korn was told that one young woman sobbed as she saw the group being taken away by the police, she said.

“When they saw us going to jail for them, they were just overwhelmed,” said Sister Korn. “Some of them cried. It was a beautiful moment, and it made it all worthwhile.”

Some of those arrested sang and prayed, and many of them — such as Dominican Sister Elise Garcia and Mercy Sister JoAnn Persch — said they had no option but to participate in the act of civil disobedience to speak out against the failure of Congress and the Trump administration to help the young adults.

“I have never been arrested in my life, but with the blessing of my community, I am joining with two dozen other Catholic sisters and Catholic allies to risk arrest today as an act of solidarity with our nation’s wonderful, beautiful Dreamers,” said Sister Garcia. “To our leaders in Congress and in the White House, I say ‘arrest a nun, not a Dreamer.’”

She said she was there to support those like Daniel Neri, a Catholic from Indiana who was present at the event and would benefit from any legislation to help the 1.8 million estimated young adults in the country facing an uncertain future.

“What are we doing to the body of Christ when are hurting families? When we are hurting people?” he asked.

He also said, he wanted people to know that “we are not criminals, we are not rapists, we are good people.

Jesuit Father Thomas Reese said he was representing Jesuits from the West Coast and other Jesuits, who know exactly who “Dreamers” are.

Pointing to the U.S. Capitol building, where lawmakers gather, he said, “it is time for the people who work in that building to realize that this is a moral issue. It is a justice issue, and the political gamesmanship must stop.”

Sister Persch said she was there, too, to support Dreamers. She took part largely out of frustration, she said.
“My prayer, my work for comprehensive immigration reform has had no impact on this administration,” she said. “I stand with Dreamers now at this moment of truth, which to me is a moral issue. When these traditional strategies we have used have no impact, we have to move to action that could involve taking a risk to disrupt this unjust system in some way.”

And if that meant being arrested, she was willing to do so, she said.

“As a woman of faith, I am called to be wise … courageous, a prophetic voice,” she said. “That is a challenge to every person who says they are a Catholic, a Christian, a person of faith. And this applies to Paul Ryan as well as all those in Congress.”

House Speaker Ryan, R-Wisconsin, is Catholic and many said they took issue with what they see as his lack of action on several issues involving immigrants. At various moments, including one near the U.S. Capitol, the crowd chanted, “Paul, Paul, why do you persecute me?” referring to the speaker.

In the rotunda, many of those who risked arrest, began by joining hands, singing hymns and praying “Hail Mary.” They included Father Reese, along with Sisters Garcia and Persch. U.S. Capitol Police began warning them repeatedly to stop or be arrested. Of the 30 or 40 arrests, eight were Mercy Sisters.

Bishop John Stowe of Lexington, Kentucky, extended his hands in the air and said: “We stand with the Dreamers, we are one with the Dreamers. And now I ask God’s blessing upon those who are acting in civil disobedience, part of a long-standing tradition of not supporting unjust laws.” Shortly after, they were asked to put their hands behind and were placed in plastic handcuffs and led away, some in prayer, some singing. They were charged with disorderly conduct, crowding, incommoding and obstruction. By 4 p.m. (local time), they had all been released.Just as those who were arrested at the Capitol were stepping out of out their comfort zones, so, too, the young adults they were advocating for are facing an even greater discomfort, the bishop said, as they face their greatest moment of uncertainty.