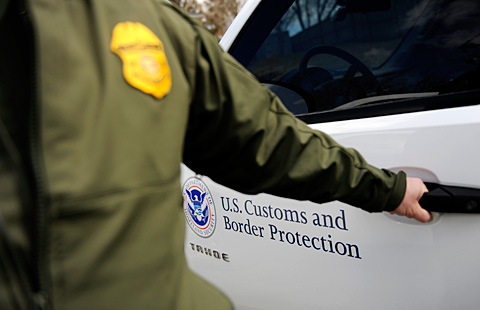 A top U.S. Customs and Border Patrol official is rebutting a recent report claiming the agency engages in the racial profiling of noncitizens and employs aggressive tactics to maximize arrests.

Such allegations are "false and improper," Chief Patrol Agent Brian Hastings of the Buffalo Sector said in an April 3 interview with El Mensajero Católico.

At the end of January, Families for Freedom, an immigrant activist group based in New York City, released a report based on an investigation conducted by two professors from New York University School of Law’s Immigration Rights Clinic. The professors focused on the Border Patrol’s Buffalo Sector, analyzing information from depositions of senior officials, and data and documents released by Border Patrol after years of litigation, according to http://familiesforfreedom.org/sites/default/files/resources/Uncovering%20USBP-FFF%20Report%202013.pdf

* Awarded agents with such bonuses as vacation time, gift cards and cash, with "a complete absence of objective standards" for the large expenditures on these bonuses, which Families for Freedom states is "disturbing in light of the agency’s focus on station and sector-level arrest rates." But Hastings said that the bonuses were given to agents for demonstrating best practices — such as a water rescue or heroic behavior in a dangerous situation — not for making arrests, which have fluctuated throughout the past decade.

* Produced documents that show the extent of an agencywide monitoring system for arrest rates after "years of obfuscation"; an analysis of I-44 forms — which agents complete to document the arrests of individuals who are later released — revealed that database errors were largely to blame for the detention and later release of detainees from South Asia, East Africa, Africa and the Caribbean.

* Creates an enforcement culture of maximizing arrests by acting on the assumption that agents may arrest or detain any noncitizen anywhere in the country — whether that person is a tourist or permanent resident — if that person is not carrying proper documentation.

Subsequent to the report’s release, the Legal Action Center of the American Immigration Council in March filed a series of legal claims against Border Patrol offices throughout the country. Those claims support the report’s findings, said an attorney who assisted with the filings.

"Our litigation … is part of a national movement to try and shine a light on Border Patrol and its unconstitutional practices," said Rebecca Engel, policy counsel for the Legal Action Center. "And the movement as a whole is about the Border Patrol agency’s … practices without regard to people’s rights."

But Border Patrol’s Agent Hastings countered that Families for Freedom’s findings contain "assumptions (that) are completely false." In particular, he took issue with the NYU investigators’ failure to reach out to the agency to help in understanding the documentation they had obtained.

For example, Hastings said that he believes the researchers misread the I-44 forms, which were developed — in response to requests the agency had received for information about stops that previously had not been documented — to record every stop made. Hastings said that the researchers improperly counted I-44 forms as arrests even if a person was only questioned and released after showing proper documentation.

Yet Abraham Paulos, Families for Freedom’s executive director, said Border Patrol does not make clear to the public what its criteria are for a stop vs. an arrest.

"If pulling someone off a bus and taking them to a station for several hours is not an arrest, then what is it?" he added. "We are concerned of the number of individuals that ‘were stopped,’ arrested or questioned."

Hastings said it is incumbent upon any foreign-born person in this country — whether a legal resident, tourist or student — to carry documentation at all times to avoid any kind of suspicion of being in this country illegally.

"During performance of an agent’s duty, we often run across individuals who have false documents or no identification of any means," he said. "In that case, it’s incumbent upon us to run them through actual law-enforcement programs or systems. … and verify who they are."

But, Paulos said, some of the people caught in stops were citizens, who are not required to carry a passport or any documentation, Paulos said.

"(Border Patrol) essentially operates as if the United States is a ‘show me your papers’ state in which everyone, even citizens, are required to carry documentation," he added.

According to Esther Portillo, one of Families for Freedom’s organizers, the group initiated the investigation because it was receiving hundreds of calls from individuals who had been traveling on trains and buses through the Rochester area and were caught through targeted enforcement efforts by Border Patrol.

The organization then joined forces with NYU, which had worked on a previous report on Border Patrol, she added. Families for Freedom gained access to Border Patrol’s documents through litigation filed under the Freedom of Information Act.

"A lot of people assume that most people detained were Latinos, but they were actually other immigrants," Portillo said. "The people arrested that were undocumented were mostly Latino, but the people who had legal permanent residency were other immigrants of color too," she added. "Basically, they are engaging in this racial profiling."

Racial profiling also is alleged in one of the cases filed by the Legal Action Center regarding an incident in the town of Heuvelton in northern New York near the Canadian border, Engel said.

In that incident, she said, Lucy Rogers, who is a naturalized citizen from Mexico, was pulled over by Border Patrol as she was driving two farmworkers to an appointment. Rogers had not violated any traffic laws, Engel said, asserting that the agents had no basis to stop Rogers.

"Her Fourth Amendment rights were violated because you are not allowed to be pulled over unless (an officer) has a reasonable suspicion to do so," she said. "There was no traffic violation whatsoever. And when they pulled her over, they admitted to that. They said they were doing a citizens’ check-up. That is not a real thing."

Hastings acknowledged that traffic stops are not part of the mission of Border Patrol agents, but that they instead make vehicle stops often based on intelligence they receive from other police agencies near border areas.

Fluctuating speed for a vehicle on a highway also may alert agents to a suspicious situation, Hastings noted.

Hastings said that racial profiling by any agent is not tolerated. And agents are taught from the start of training how to recognize certain behaviors and mannerisms, such as nervousness, and what to identify, he added.

"When we walk onto a bus to do a bus check inspection at a transportation outlet, say a Greyhound bus, we talk to every individual. We do not single out any person," Hastings noted.

But the filings on behalf of plaintiffs like Rogers do demonstrate that Border Patrol as a whole has gone beyond enforcing border security, Engel contended.

"People are walking, driving, doing their job and constantly being pulled over multiple times and sometimes without a legal basis," she added.

Hastings said that the agency must continue doing a better job of interacting with communities to create a better understanding of its mission to protect the 341 miles of land and water border for which it is responsible.

"We have to get that message out, not only because they are all taxpayers, but because we have men and women risking their lives to protect our border. We need understanding and help from local citizens," he said.

Dr. John "Lory" Ghertner, a migrant worker activist from Wayne County, acknowledged that Border Patrol agents are just following procedure. Amid ongoing debate over reforming immigration laws, he said the question of aggressive enforcement has to be addressed at a national level.

"This is a top-down thing," he added. "If you’ve got an entire army doing the exact same thing, someone is leading them to battle."