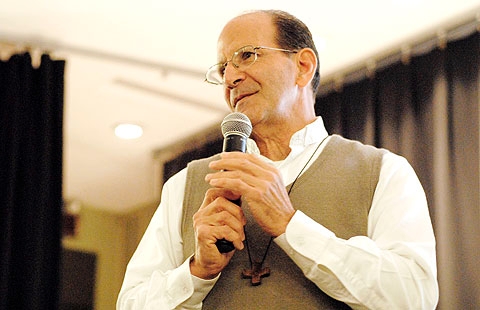 GENEVA — Padre Alejandro Solalinde preached a message of love and hope of a different sort on Valentine’s Day.

During a visit to Hobart and William Smith Colleges, he detailed how the shelters he runs in his native Oaxaca, Mexico, provide food and shelter for thousands of migrant workers traveling north from Central America.

"It is a wonderful thing," said Father Solalinde, coordinator of the pastoral of human mobility for the south Pacific region of the Mexican Episcopate. "No one ever leaves hungry."

Father Solalinde’s talk was part of a speaking tour of several colleges in the region spearheaded by the Committee on U.S.-Latin American Relations at Cornell University, explained Tim Shenk, CUSLAR coordinator, who also served as a translator. Father Solalinde also spoke at Ithaca College and Pittsford’s St. John Fisher College.

He opened the doors to El Camino de Hermanos (Brothers on the Road) in the city of Ixtepec in response to the streams of migrants he was witnessing flee their native countries and taking long and dangerous train rides from the neighboring Chiapas region on the route north toward the United State, according to information at www.hermanosenelcamino.org. On their journey, many of the migrants are exploited and beaten by police and immigration officers as well as kidnapped by drug traffickers who force their poor families to pay ransom, explained Father Solalinde. Six out of every group of 10 women are raped, he said.

"Mexico is a country that is mired in corruption and violence," he added.

Hermanos en El Camino operates more than 50 shelters that have sprouted along this "unauthorized migratory route" and provide not only food and rest but also legal and psychological assistance, the website states. The shelters have become the modern-day equivalent of the Underground Railroad, noted Alejandra Molina, Hobart’s director of intercultural affairs.

And, she added, Padre Solalinde is like Martin Luther King Jr. and Ghandi as he works to shine a light on injustice — and has paid the price with beatings and death threats from police and drug gangs.

"They (shelters) provide a front line against the brutal attacks of migrants in transit to Mexico (and the United States)," Molina said. "Padre Alejandro is providing shelter for migrants looking for a better life for themselves and their families."

Unfortunately for them, migrants are seeking that better life in two countries that neither want them nor value their contributions, Father Solalinde said. While Mexican authorities and traffickers abuse and take advantage of migrants, Padre Alejandro said Americans treat these immigrants with contempt despite being a country founded by immigrants.

America has become the place where capitalism reigns supreme and justice takes a back seat, he remarked.

"God doesn’t rule over us (as he should)," he added. "No one pays attention to God."

For Dr. John "Lory" Ghertner, a local advocate for migrant workers who founded Migrant Support Services and the Kids for College program, one statement from Father Solalinde’s presentation at Fisher stood out for him: "The hearts of public policy are closed. We need to open them."

"Padre Alejandro showed us that the migrants are real people who risk their lives everyday," Ghertner added. "To witness someone who gives everything for others, even under the threat to his own life, to help humanity, is so humbling for anything I can do to help anyone."

Father Solalinde also provided a somber reminder that Christians must continue the struggle against the "immoral" laws that deport migrant workers and separate families, said Antonio Gómez, who came to this area as a migrant worker and became a citizen in 2004.

Father Solalinde said he received his own wake-up call when local government officials and drug gangs once threatened to burn down one of his shelters with him in it, and he acknowledged those were the worst days of his life. He now has guards with him at all times in Mexico.

"I don’t remember having suffered so much and not for myself but because the migrants would be left completely unprotected if they burnt down the shelter," he emphasized.

But Father Solalinde said he has overcome his fear through faith.

"But I know that my life is in God’s hands," he noted.

And he also doesn’t worry if his shelters will survive financially. When Father Solalinde is invited to speak, he does not ask for money or volunteers.

Food always arrives, be it through the rice, beans and oil donations from local young people in his city, chicken from Mexican farmers or his own family providing a monthly donation. Volunteers appear from all over the world at the shelters’ doorsteps, he added.

"I trust in Jesus — he has told us to seek first the kingdom of God and justice," Father Solalinde said. "And everything else will come."

Last year, the shelters received $30,000 from Mexican politician Cuauhtémoc Cardenas, who donated his $15,000 prize and matching donation from the University of Notre Dame for being awarded the 2010 Notre Dame Prize for Distinguished Public Service in Latin America. The money was used to build separate dormitories for women, Father Solalinde said.

"I don’t get worried," he added. "God has to help us because God is not helping me, I am helping him so he has to provide. And let me be clear, he has not failed me yet."