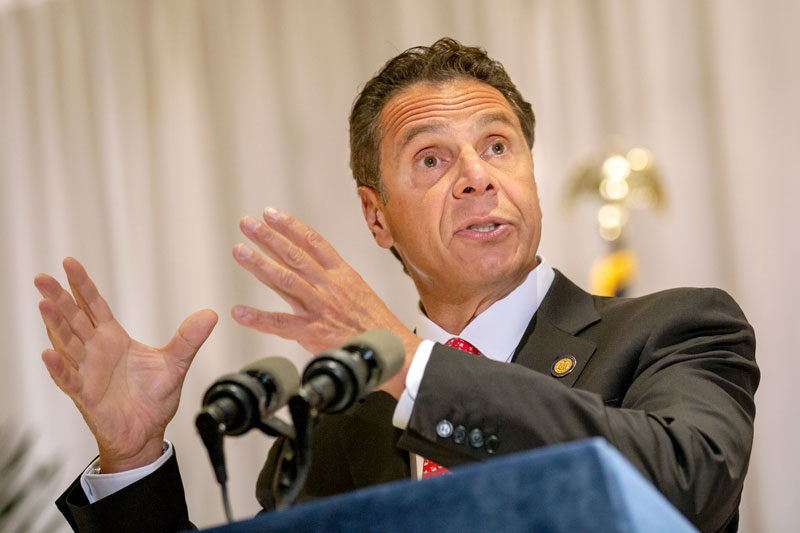 In a letter to the agency, Gov. Andrew Cuomo requested “the immediate stop of their reckless and unconstitutional enforcement actions.” Additionally, the governor modified Executive Order No. 170 to prohibit ICE arrests without a warrant in state facilities, according to information from the governor’s office.

The governor’s letter condemns the agency’s patterns of conduct it says target immigrants and jeopardize public safety. His modified state Executive Order No. 170 now additionally prohibits state agencies and officers from inquiring about an individual’s immigration status unless required by law or necessary to determine eligibility for a benefit or service, or disclosing information to federal immigration authorities for the purpose of civil enforcement. It also prohibits law-enforcement officers from inquiring about immigration status unless they are investigating illegal criminal activity.

Under the executive order, federal immigration authorities may execute a civil arrest in state buildings if they have obtained a judicial warrant or judicial order authorizing them to take into custody the person who is the subject of such warrant. A civil arrest is also permissible is related to a proceeding within such building.

The governor’s announcement followed an increase in the occurrence of ICE raids across New York, especially affecting farms and the agricultural industry, according to information from the office of Richard A. Ball, commissioner of the state Department of Agriculture & Markets. Increasing numbers of raids have shaken up the agricultural community, creating the potential to negatively impact the state’s agricultural economy through the loss of farms, jobs and production, according to a statement from Ball.

Farmers will continue to face continued challenges in obtaining sufficient labor absent a federal system ensuring that undocumented workers who clear background checks and obtain work visas can work, state officials said. A report released by Farm Credit East based on 2012 U.S. Census data estimated that approximately 1,080 New York farms would be affected by the deportation of undocumented agricultural workers, forcing the farms to go out of business or significantly reduce their operations.

Ongoing deportations could reduce agricultural production by more than $1.37 billion or 24 percent, according to the state’s agriculture department, and 21,500 farmworkers — both immigrants and U.S. citizens — could lose their jobs. Indirect effects could cause even more job losses in related fields, including agricultural marketing and processing businesses, farm supply and farm services.

Yet ICE director Thomas Homan told El Mensajero Católico that deportations by his agency, regardless of where they take place, are part of the agency’s commitment to public safety. Since September 2016, ICE has arrested nearly 5,000 “criminal aliens” in New York who had criminal convictions in addition to their violation of immigration laws, according to an email from Homan.

“Many of these arrests were conducted at large in the community, which ICE is increasingly forced to do due to sanctuary policies in the state that prevent us from taking custody of criminal aliens in the secure confines of a jail,” he stated. “The Governor supports these (sanctuary) policies at the expense of the safety of the very same communities he took an oath to protect.”

A native New Yorker who began his career as a police officer in the state, Homan said he was disappointed by the governor’s stance on immigration enforcement.

“ICE cannot and will not cease and desist from fulfilling our agency’s congressionally mandated mission of enforcing federal law,” he added.

Members of Alianza Agrícola, a Geneseo-based advocacy group comprising area farmworkers, said they applaud the governor’s actions and agree legislation is needed to protect the state’s immigrant community. Members of the group said they would like the governor to support the group’s Green Light campaign — a proposal for which has been submitted as a draft bill in the state Assembly — to enable undocumented workers to obtain drivers’ licenses.

In a statement, the alliance said it also hopes financial support for upstate groups defending immigrant rights will be provided by the Liberty Defense Project, a public-private partnership launched by the state last year to provide legal counsel to all immigrants regardless of status.

EDITOR’S NOTE: New York state provides information on immigration at the New Americans Hotline, 800-566-7636. Information about the Liberty Defense Project and the free legal services it offers is available at www.ny.gov/programs/liberty-defense-project.