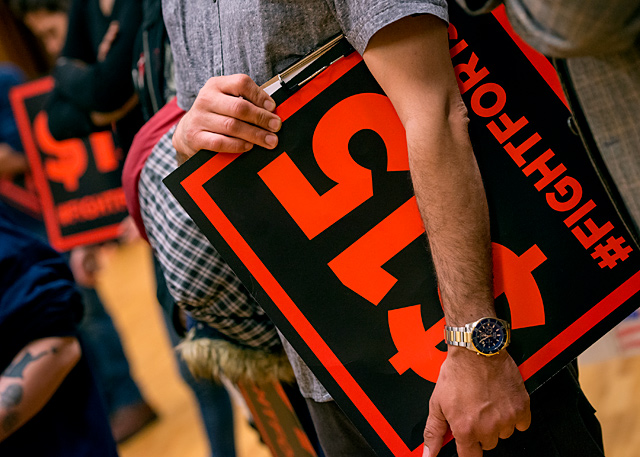 A rally attendee holds a Fight for 15 sign under his arm during a May 1 demonstration at the Lutheran Church of Reformation in Rochester.

ROCHESTER — During a May Day Celebration of Immigrants held at Evangelical Lutheran Church of the Reformation, Angie Rivera encouraged the support of immigrants by all Latinos, especially Puerto Ricans that she said are blessed to not have to worry about their legal status in this country.

"Let’s build schools, not walls," Rivera, who heads up the Rochester Association of Paraprofessionals, told the more than 50 people who attended the May 1 event. "Let’s put an end to (punishing) hard-working men and women who want to realize the American dream, the immigrant dream, to work and giving their children the opportunity to go to school … and become tax-paying members of our communities."

Angie Rivera listens to a speaker during a demonstration at the Lutheran Church of Reformation in Rochester May 1.

Rivera said she knows about those dreams, having arrived from Puerto Rico 27 years ago as a single mom with two daughters. She just happened to have a U.S. passport so she didn’t have to worry about obtaining documents to in order to live and work on the mainland, she added.

"I’m asking immigrants, all of us who are Hispanic and not in danger of being deported, to stand up and speak up for all immigrants," Rivera said.

Rivera was one of several speakers during the celebration that was organized by the newly created Rochester Workers Center. Luis Torres, an organizer at the center with Sallie Williams, said the nonprofit organization was established in December with a six-member board of directors and a mission to connect low-wage workers across communities and fight for the issues affecting them at their workplaces.

The center’s members include immigrants from rural areas who are helping advocate against sexual abuse in the workplace as well as African-Americans who live in the city and have joined the "Green Light" campaign to lobby for the rights of undocumented workers to obtain driver’s licenses in New York state, Torres said.

"The main idea of the center is trying to bring different communities together through their experiences at work … to cross two different cultures when trying to add people’s ability to make a living," Torres explained.

The Rochester Workers Center grew out of a grassroots initiative in 2011 that partnered community activists and workers’ rights attorneys at the Empire Justice Center, a nonprofit legal assistance firm, he said. The center also received support from the Workers Justice Center of New York, Metro Justice and several area labor groups as it expanded its efforts to unite and assist diverse workers in learning their rights and addressing workplace injustices, according to information on the center’s website (https://rochesterworkerscenter.org).

Issues the center could assist with or provide training for would include job discrimination, workplace rights and worker’s compensation, Torres added. The center also could assist with connecting a person with a lawyer or providing a platform for a community-based advocacy effort, such as the "Fight for $15" minimum-wage campaign, Torres said.

"This (center) is about getting people who tend to (feel) very isolated sitting in the same rooms to talk about their experiences," he said. "They become the experts because they know more about this stuff than we ever do."

As a member of the center’s board of directors, Ruby Jennings of Rochester said she has already learned a great deal about the commonalities between her situation and that of undocumented workers, including the need for better wages, safer workplaces and more family-friendly hours.

"I believe the community can do better for working moms and dads," she said.

Jennings said Williams invited her to join the board, and she accepted the challenge to push herself to be more vocal about the needs of low-wage workers. She had no idea how much she had in common with immigrant workers until she joined the board, she added.

"We can work on bringing everyone together — black, white, Puerto Rican, Asians … and fight for job equality, better neighborhoods and better jobs," Jennings said. "I’m not a good speaker … but I want to learn. I want to speak and let other people know we need help."

While the center has only a few more than 20 members, hosting events like the May Day celebration will help grow that number, Torres said.

The center’s board and members also are working on a campaign to be unveiled in the summer that will focus on one industry, he added. Part of the campaign preparation will include training as many as 240 workers and 120 community allies on specific issues and continue to build solidarity with immigrant workers, he said.

The campaign will likely follow the same format as a listening tour the center’s members conducted across Monroe County last year with testimonials from local workers about the need for the center, Torres said.

"We’re always pushing workers to speak for themselves," he said.

EDITOR’S NOTE: For more information or to become a member of the new Rochester Workers Center, e-mail info@rochesterworkerscenter.org or call 585-454-9425.