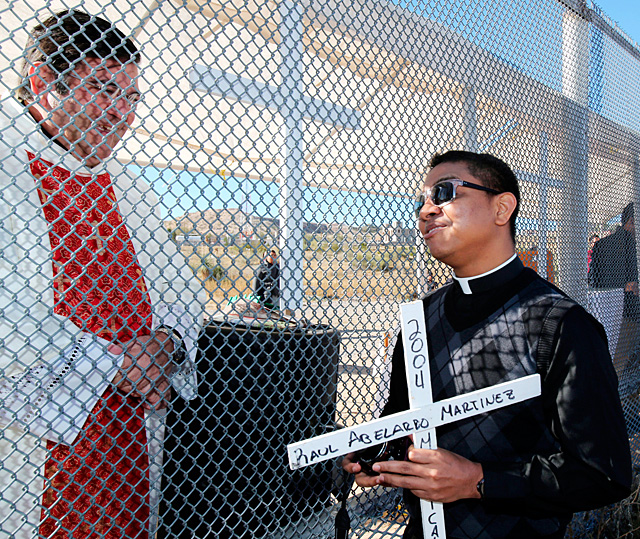 While local migrant workers and immigration-reform advocates are happy that President Barack Obama took action to address the plight of undocumented families, they are disappointed that his executive order didn’t go further to help more workers.

"Many of us were expecting more from the (president)," said Dolores Bustamonte, who is from Mexico and works in Williamson. "Many of us remain excluded even though we have been here for several years. … We work in the heat, the cold and that is something he is not considering."

Bustamonte, who spoke during a press conference call arranged by the Greater Rochester Coalition for Immigration Justice, was recently detained during a traffic stop and is awaiting an appearance in immigration court. Because her daughter was not born here, she does not qualify for the Deferred Action for Parents outlined in the president’s speech on Nov. 20.

Many of those who spoke had watched the announcement during a watch party that was held at St. John’s Episcopal Church in Sodus.

According to information at http://whitehouse.gov, the president’s plan calls for:

* Allowing 4 million undocumented parents of U.S.-born children and lawful permanent residents to stay temporarily without fear of deportation if they have been here five or more years, pass a background check and pay taxes.

* Deploying more resources to the border to strengthen enforcement and deport undocumented immigrants who have recently crossed the border.

Sister Luci Romero, a migrant minister in Wayne County for the Diocese of Rochester, is worried about that call for increased enforcement and fears that the U.S. Border Patrol will employ more severe methods and persecution of those not covered by the executive action.

"We are sad that this action excludes more than half of farmworkers," she said. "We know workers who have been here more than 10 years with deep roots in the community. … And they worry that this (policy) will create a division."

And in this region, many of the workers are men whose families remain in their native countries, so the action carries only a negative impact, she added.

José Coyote of Mount Morris knows the pain of facing deportation. The dairy worker was stopped earlier this year while driving through Letchworth Park with his four children. (His story appeared in the September issue of El Mensajero Católico and can be found at http://bit.ly/11DhRRX.)

He is grateful that the president’s order offers him relief from being separated from his family. But Coyote stressed that he hopes for more permanent legislation from Congress to not only help his family but the millions of other undocumented workers who will not receive any such relief at all.

"For me, it appears better than not doing anything. We have to start somewhere," Coyote said. "But I would prefer a more comprehensive approach to benefit more people. (This policy) leaves many people out."

While the fight for comprehensive immigration legislation will continue, said José Peréz, an immigration attorney with offices in Syracuse and Buffalo, this action does help more than 3,000 families in the upstate region.

"This temporary fix is just that," he added. "A temporary fix that allows these individuals to … come out of shadows for a short period of time. But we need something that will tell what this country is really about: a country of immigrants."

The president’s action also means the release of hundreds of people from the Batavia Detention Center, noted Dr. John "Lory" Ghertner, a member of the immigration coalition and Wayne Action for Racial Equality.

"But it goes beyond the farmworkers, the domestic workers and construction workers. It goes to the security of our economy," he added. "Without growth of your population, you can’t have growth of your economy. … So even as much as this is a human rights issue, this is an economic issue."