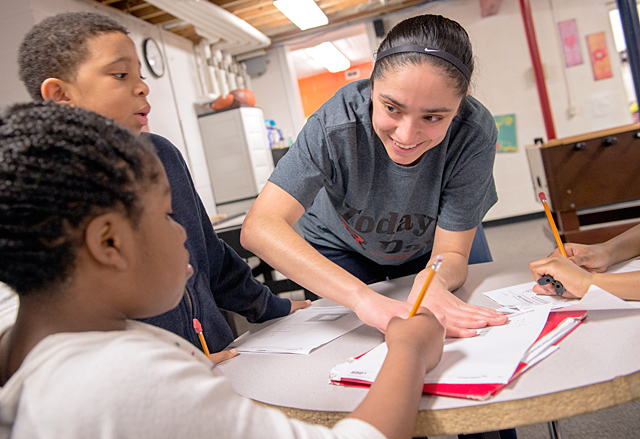 Married as a teenager in Michoacan, Mexico, Jasso and her husband, Efrain Arellano, traveled to the United States as migrant workers. She was 18 but had only attended primary school, having learned to read and write with the help of an aunt.

She continued as a migrant worker for 19 years, many of them spent at Heberle Farms in Hamlin. U.S. Immigration and Customs officials detained the couple in 2007, but they were able to obtain work permits that are valid until their oldest daughter, Tania, is 21. The couple will then be able to apply for green cards, Jasso explained.

As the eldest of four children who were all born in the United States, 19-year-old Tania Arellano has witnessed the struggles of her parents with the immigration system, her mother said.

Despite those challenges, Jasso beams with pride when talking about the multiple scholarships her daughter received to attend Roberts Wesleyan College, including one from the Bill and Melinda Gates Foundation. Tania is currently a freshman at the school.

"I am very happy for her and all my children because they are not going to be left with an unfulfilled desire to be educated," Jasso said during a Feb. 22 interview at the university. "I’m also very proud that she decided to go to college, and here she is doing very well."

Arellano said she was one of 1,000 students selected last year to receive the Gates Foundation scholarship. Most recipients are first-generation college students in good academic standing.

A 2015 graduate of Kendall High School, Arellano said the encouragement of school counselor Mirjam Bauer and the support of her mother helped her succeed.

"She is one of my greatest inspirations," she said of her mother.

Arellano is humble about her accomplishments, noted Jeanne Lauta, a family friend.

"If you could see all the awards she got in high school,… she’s very modest for what she’s done," Lauta added. "She’s got the will and the brains to succeed."

"Tania and her mother share the value of education," Bauer added. "Her mom is just a shining example of how important education is for this family."

Jasso personally demonstrated the value of education when she decided three years ago to work on earning her GED, which she received last fall. She recently found a job with Lifetime Assistance, working with disabled students at SUNY Brockport.

"Well, the years go by and I decided that I wouldn’t be able to work the fields in 20 years," Jasso said of her decision to go back to school. "I began my studies."

Her first step was a BOCES class offered in Waterport, Orleans County. She said she stuck with it for a winter, but with just one teacher responsible for a large group, she didn’t feel she was getting enough feedback to know if she was making progress.

So she reached out to Penny Gardner, whom she had met while Gardner was working in the Brockport area as a migrant minister for the Diocese of Rochester. Gardner helped Jasso connect with some parishioners from St. Elizabeth Ann Seton Parish in Hamlin. These parishioners provide activities for migrant families at the Arellano family’s parish, Nativity of the Blessed Virgin Mary Church in Brockport.

The SEAS parishioners and other area residents, who are primarily retired teachers and engineers, tutored Jasso at her Hamlin-area home every week for about two years, according to Jeanne Lauta. Lauta and her husband, Frank, were among the tutoring group.

"Tania’s mom worked tirelessly on obtaining her GED, while working and caring for their family," Jeanne Lauta said. "What an awesome family."

When the tutoring sessions started, Jasso said she would work in the fields from 7 a.m. to 5 p.m. and then meet with the tutors at 5:30 p.m. She said she soon realized that schedule was too much and stopped working to focus on her getting her diploma.

"She’s unbelievable," Jeanne Lauta said. "She taught herself a lot of the computer skills. She did a lot on her own. She’s very inquisitive. … She’s pretty much on her way."

"It’s been a real pleasure working with her," added Frank Lauta. "I encourage other people to follow our path. It was a wonderful experience."

Jasso said she is still amazed and humbled that so many people worked so hard to help her.

"It was so special and is something I would never expect of anyone, let alone someone I don’t know," she said.

Arellano said such examples have inspired her to give back. She has joined a group of students who assist weekly at Rochester Family Mission, where she mainly tutors students. She also is raising money to go on a mission trip to Huehuetenango, Guatemala, with the Roberts Wesleyan student club Anactis.

Her goal is to raise $2,000 for the trip, and the club is selling T-shirts and jewelry to help students raise funds, Tania explained. During the trip, volunteers will open a restaurant near an orphanage to provide jobs for young women in the area.

"I thought it (the trip) would be a good experience," Arellano added. "I like working with kids and just to give back."

Someday, she would like to have a job that affords her the time to volunteer and continue missionary work. She said she is grateful for how hard her parents worked, often seven days a week, and how they helped her see the importance of education, she added.

"It was difficult sometimes seeing the struggles my parents went through," she noted. "But we always had everything we needed."

Her mother said she hopes to continue her educational journey but is taking time now to focus on her new job and her children. The family recently moved into their own house after living in an apartment near Kendall, and the younger children — Johnny, 15; Princesa, 11; and Diego, 9 — currently are enrolled in the Brockport Central School District.

Anything is possible," Jasso said. "You have to be patient and make an effort."

EDITOR’S NOTE: To purchase a T-shirt or donate to Arellano’s mission trip,  click here and send an e-mail to taniaarellanojasso@yahoo.com.