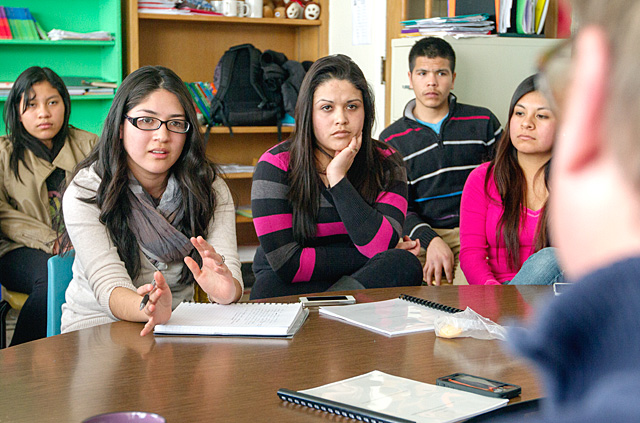 Senior Bellacith Olivera-Hernandez, front left, talks with Principal Gene Hoskins about a report she wrote with other students entitled "The Impact Parental Immigration Has On Their Children's Academics" during a meeting at Sodus High School March 13.

SODUS — She may have only been an 8-year-old child at the time, but Erika Mendoza vividly remembers the day her father was arrested by Florida police for driving without a driver’s license and subsequently deported back to Mexico.

"I saw the lights and everything," she said. "My brother was crying."

After taking her father into custody, the police asked Mendoza, her brother and her mother to get out of the back of the truck in which they had been riding, she explained. The family they were riding with as part of their travels all over the country as migrant workers wound up taking them in.

Mendoza, a 19-year-old a senior at Sodus High School, traveled to Albany March 5 for an Immigrant Day of Action to lobby for passage of a bill to allow all state residents to obtain driver’s licenses. Passage of such a bill would make a huge difference for her parents and her family, she said.

"It’s hard having undocumented parents," said Mendoza, who has two younger siblings. "You can be here but your parents can’t. You never know, they could take away both your parents and you go into foster care."

Even though Mendoza was born in the United States, she also advocated for passage of the state DREAM Act, which would help many of her friends who moved here with their parents. The bill, which was defeated by two votes last month and was not included in Gov. Andrew Cuomo’s budget, would have allowed undocumented students who meet in-state tuition requirements to have access to state financial aid and scholarships for higher education. The bill also would have allowed for students to apply for citizenship as soon as they were able.

Mendoza, who is waiting to see if she will get financial aid so she can study nursing this fall at Finger Lakes Community College, said that undocumented youths had hoped to finally feel a "weight lift off their shoulders."

"I feel like the New York Senate has failed immigrant youth," she remarked.

State Sen. Ted O’Brien, who met with the Sodus students during their Albany trip, said in an e-mail that the best way to help undocumented students is for federal legislators to enact comprehensive national immigration reform, which would resolve many issues that cannot be adequately addressed by "piecemeal, state-by-state policies."

Additionally, undocumented students who reside in New York and apply to state universities or colleges are eligible for treatment as "in-state" applicants and, therefore, eligible for the reduced tuition, he added

College is the goal for most of the Sodus students that traveled to Albany who are members of an afterschool "Kids for College" club to support each other as they navigate the American school system and learn English. Most of the club members are immigrants from Mexico.

"Our other goal is to help each other succeed," said junior Erika Camacho, 17. "By helping each other, you’re actually helping yourself."

Senior Lluvia Mendoza, 20, said that support has meant everything as she has struggled to learn English after moving to the area three years ago with her parents and four brothers. She never would have imagined that moving here would mean someday speaking with four state senators about the positive impact that the DREAM Act would have on her life.

Senior Luvia Mendoza, left, senior Bellacith Olivera-Hernandez, junior Erika Camacho, eight-grader Lesly Hernandez and junior Willy Hernandez were part of a group of students from Sodus High School who met with legislators at the State Capitol to advocate for passage of the DREAM Act in March.

Without the DREAM Act’s passage, however, she fears she won’t be able to afford her dream of going to college. Her oldest brother now works to help out the family financially.

But she won’t give up the fight and knows how fortunate she is to have the chance to do so, Mendoza added. She said that life in her native Michoacan was "horrible," as the town was overrun by drug cartels. Life is better here but still not easy, Mendoza noted.

"(But) some people don’t have the opportunity to come here and have a better life," she noted.

Dr. John "Lory" Ghertner, who provided the transportation to Albany and was one of the chaperones, said that the group of 16 students — who also were from Williamson, Ontario and Penn Yan — poured their hearts out during the Albany trip. And he plans on doing the trip again next year. One of the college-age students who was part of this year’s Albany contingent can’t attend school because she is living here with a single mom who can’t pay for her studies, he said. And stories like hers is why the group must keep the DREAM Act alive, Ghertner, who also is a member of Migrant Support Services of Wayne County..

"The students who went on this trip spoke up not only for themselves but for everybody … for students all across New York state," he said.