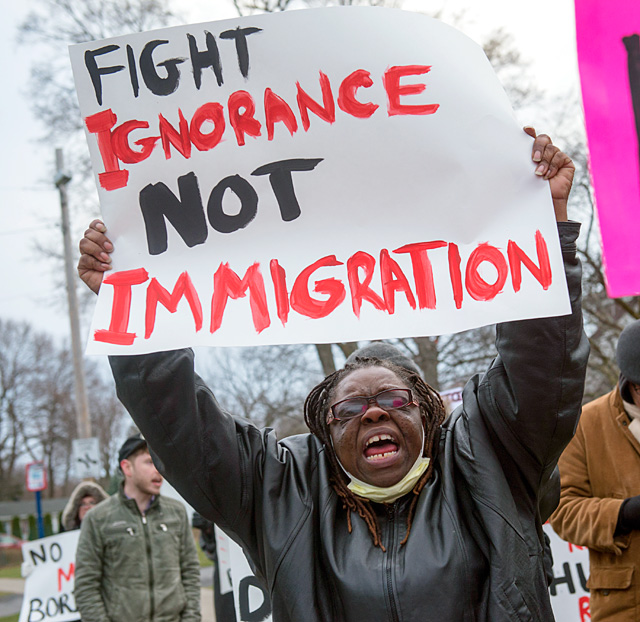 Sallie Williams of the Rochester Workers Center takes part in a March 9 rally at Rochester's Summerville Presbyterian Church in support of Jose Coyote, who has been detained by Immigration and Customs Enforcement. EMC photo by John Haeger

José Coyote says undocumented immigrants like himself need to learn more about their rights in this country, even though having such knowledge did not benefit him in a recent situation with law enforcement.

Coyote currently is being held in the Batavia Detention Center after being detained by Immigration and Customs Enforcement (ICE) officials. His detention occurred due to a mix-up related to reporting he was required to do and a disagreement with another individual, according to Rebecca Fuentes, a lead organizer with the Worker Center of Central New York.

About a hundred people rallied for Coyote’s release March 9 outside the Summerville Presbyterian Church in Rochester. They also offered support to Dolores Bustamante, another migrant worker who was to appear in an immigration hearing in Batavia on March 15.

"Like José Coyote, there are many people who find themselves in this situation, including myself," Bustamante said during the March 9 rally. "They (immigration officials) are separating us from our families. We already left family behind once out of necessity. And now, we have to do it … again. This is an injustice."

People take part in a March 9 rally at Rochester’s Summerville Presbyterian Church in support of José Coyote, who has been detained by Immigration and Customs Enforcement.

As El Mensajero Católico reported in September 2014, Coyote had been detained during a traffic stop by park police at Letchworth State Park for driving without a seat belt. Upon release, he was required to report to immigration officials each month, either in person or by phone, as part of an agreement that reinstated a 2008 deportation order against him, explained his lawyer, Anne Doebler of Buffalo. At the time, his alleged immigration violation was not a priority for ICE officials, who then were focusing on undocumented immigrants thought to be involved in such crimes as drug trafficking, she said.

However, the prosecutorial discretion ICE officials employed in making the 2014 agreement with Coyote has since been discontinued as a result of executive memorandums issued by President Donald Trump, Doebler told El Mensajero Católico Feb. 27.

"A lot of things in this case are out of the ordinary," Doebler said, asserting that federal officials also had failed to inform her that they had reactivated Coyote’s deportation case.

However, she added, "nobody is telling me he’s been charged with anything. "

"The best thing that I can say is (prosecutorial) discretion seems to not be being exercised," Doebler noted.

Trump’s updated immigration executive orders "direct executive departments and agencies … to deploy all lawful means to secure the Nation’s southern border, to prevent further illegal immigration into the United States, and to repatriate illegal aliens swiftly, consistently, and humanely," according to information at whitehouse.gov.

Calling for communities to stand up against perceived injustice, local activists and community leaders claim the president’s orders provide license for immigration officials to take more aggressive action in cases such as Coyote’s.

The president also is threatening to withdraw federal funding to municipalities that designate themselves as "sanctuary cities." Despite the threat, Rochester City Council unanimously voted Feb. 21 to amend a 1986 resolution to continue to offer sanctuary to immigrants and refugees.

The resolution "says who we are as a city and what we value as a people," Council President Loretta Scott said following the vote.

Councilwoman Jackie Ortiz explained that the city’s amended proposal was based on recommendations from the state attorney general’s office, which were intended to protect the city against possible loss of federal funding.

One Monroe County legislator said Monroe County should follow Rochester’s example. Mark Muoio sent a letter to that effect to County Executive Cheryl DiNolfo, who has responded with concerns over federal funding, he explained.

Muoio said he agrees with city officials that municipalities would be protected from funding cuts if, like Rochester, they crafted sanctuary legislation using language recommended by the state attorney general.

"(We) should not expend county or city resources on federal programs," he said of any potential collaboration with immigration officials. ”In many cases, the sheriff’s and other police forces don’t have the training to assess immigration issues, which are very complicated."

Muoio said he planned to meet with American Civil Liberties Union officials to develop a legislative proposal for Monroe County to become a "sanctuary county." He said he hopes such a proposal would make it out of committee in order to be voted on by the whole legislature, but he did not have a timeline for the proposal.

Muoio said he is most concerned about the atmosphere of fear created by news of increased immigration enforcement raids and arrests.

"The baseline of what I’m worried about is making sure people who need to access the police force or courts feel like they are safe to do so no matter what their immigration status is," he added. "But anything we do will be cleared through the proper authorities, the proper channels. … I’m in favor of the county continuing to receive federal dollars. I’m making sure (of) the responsible use of our resources in enforcement of federal rules and other laws."

"With that said, obviously immigration enforcement is done by federal authorities, that’s not what the sheriff’s office does," he added. "When they (undocumented immigrants) are in jail, obviously we cooperate with federal authorities and notify ICE when an individual is being released and, in turn, immigration officials would pick that individual up if they chose to do so."

Wayne County Sheriff Barry Virts said his agency’s main concern is with individuals engaged in criminal activity regardless of race, ethnicity, skin color or creed. If deputies have information that someone is here illegally and no crime has been committed, however, the person’s information is forwarded to federal authorities for them to do with that person as they deem appropriate, he wrote in an e-mail

"Being in the county illegally (undocumented) is not a crime, but a civil violation," Virts stated. "I believe a barrier and technology on our borders is needed to slow the smuggling of drug and human trafficking. The immigration system is broken and desperately needs (to be) fixed to show our humanitarian side and provide for our labor needs."