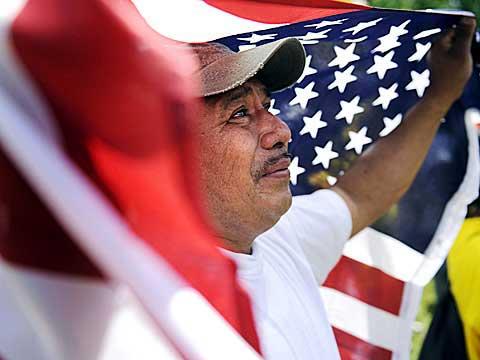 WASHINGTON (CNS) — The chairman of the U.S. bishops’ Committee on Migration, the archbishop of New York and the bishops of New Mexico have joined a growing chorus of opposition to Arizona’s new immigration bill.

Bishop John C. Wester of Salt Lake City said he would like the U.S. Conference of Catholic Bishops to support an expected legal challenge to the law, noting that the bishops’ first concern is for the well-being of the people who will be affected if the law takes effect. Bishop Gerald F. Kicanas of Tucson, Ariz., earlier in the week called for the USCCB to become involved in a legal challenge.

"A law like this has a great capacity for hurting people who are just going about their business, getting an ice cream," he told Catholic News Service April 28 in a phone interview, paraphrasing President Barack Obama’s comment a day earlier to an audience in Iowa.

"Now, suddenly, if you don’t have your papers, and you took your kid out to get ice cream, you’re going to get harassed — that’s something that could potentially happen," Obama said. "That’s not the right way to go."

Obama has asked the Justice Department to evaluate the law’s constitutionality. U.S. Attorney General Eric Holder told reporters April 27 that his office might challenge the law in court; the mayor of Phoenix is contemplating a similar challenge. The sheriff of Pima County told reporters he would not enforce the law in his territory, which includes Arizona’s second-largest city, Tucson. The sheriffs of Maricopa County, home to Phoenix, and at least one county on the Mexican border wholeheartedly embraced the law.

Bishop Wester said although the U.S. immigration system is broken, the Arizona law is not necessary.

"Instead of putting energy into that, why not put your energy into pushing federal legislators to pass comprehensive immigration reform?" he asked. Comprehensive reform legislation has been introduced in the House and is in the drafting stages in the Senate. Such bills typically include mechanisms for enforcement at the border and in the workplace, a path to legalization and citizenship for people already in the country, and changes to the system for work- and family-related immigration visas.

Bishop Wester said an antagonistic, fractured political climate in Washington makes for dim prospects for a comprehensive reform bill, especially in an election year. But as was shown at a pro-reform immigration rally in Washington in March that drew more than 200,000 people, he said, people are becoming energized about calling for reform quickly.

Religious leaders of many denominations around the country criticized the legislation. The Catholic bishops of New Mexico called the law "wrongheaded" and said they are concerned that "legal immigrants and U.S. citizens would probably be interrogated by the police if they look Hispanic, or in any other way, foreign." They said they hope the law’s implementation will be stopped.

The law criminalizes the act of being in Arizona without immigration documentation. Federal law treats that as a civil violation. The Arizona law also requires police officers to arrest those they suspect of being in the country illegally and permits lawsuits against individuals or agencies who people think are not enforcing the law.

In New Mexico, Archbishop Michael J. Sheehan of Santa Fe, Bishop Ricardo Ramirez of Las Cruces and Bishop James S. Wall of Gallup, whose diocese includes part of northern Arizona, said they believe the law "would lead to racial profiling, community distrust and a pervasive fear among immigrants." As with all the statements from church leaders and most of those from political leaders, the New Mexico bishops laid the responsibility for fixing immigration problems with the federal government.

"It is clear that we need immigration reform at the national level in order to deal with the disparities in the present immigration law," they wrote. "We bishops are concerned that other states might try to initiate such a wrongheaded law as well."

They added that the law "is not in keeping with the best traditions of our nation."

Archbishop Dolan attributed the law’s passage to a climate of fear during a time of tension and turmoil in society.

"It’s a supreme paradox in our American culture — where every person unless a Native American, is a descendant of immigrants — that we seem to harbor an ingrained fear of ‘the other,’ which, in our history, is usually the foreigner (immigrant), the Jew, the Catholic or the black," he wrote, saying that this is another of history’s "periodic spasms of ‘anti-immigrant’ fever."

"Arizona is so scared, apparently, and so convinced that the No. 1 threat to society today is the immigrant, that it has passed a mean-spirited bill of doubtful constitutionality that has as its intention the expulsion of the immigrant," wrote Archbishop Dolan. "What history teaches us, of course, is that not only are such narrow-minded moves unfair and usually unconstitutional, but they are counterproductive and harmful."

The ethos of Catholic culture, however, is one of welcome, he wrote, saying that the church has been a spiritual mother to immigrants — "who were and are mostly Catholic, who have found a home in parishes and schools which helped get them moved in and settled in America."

He said that even from a purely business point of view, "a warm welcome to immigrants is known to be good for the economy and beneficial for a society."

In addition, welcoming immigrants, helping them become legalized and naturalized as citizens, "to help them feel at home, to treat them as neighbors and allies in the greatest project of human rights and ethnic and religious harmony in history — the United States of America — flows from the bright, noble side of our American character," Archbishop Dolan said. "To blame them, stalk them, outlaw them, harass them and consider them outsiders is unbiblical, inhumane and un-American."

A few days before Arizona Gov. Jan Brewer signed the bill into law April 23, Cardinal Mahony blasted it on his blog, calling it "the country’s most retrogressive, mean-spirited and useless anti-immigrant law."

Arizona’s bishops — including Bishops Kicanas, Wall and Phoenix Bishop Thomas J. Olmsted — opposed the bill as it came through the Legislature. On April 26, Bishop Kicanas on his diocesan website called for the USCCB general counsel to review the legislation with an eye toward having the conference join friend-of-the-court briefs in support of overturning it.

A statement issued by the USCCB April 27 from Bishop Wester called the law "draconian," and said although its legal impact is limited to Arizona, its potential effect on how immigrants are perceived and treated extends nationwide.

With nearly three months before the law takes effect, calls for economic boycotts of Arizona grew on both sides of the U.S.-Mexico border. The Los Angeles City Council and the San Francisco Board of Supervisors were considering resolutions that would require their governments to cancel contracts with Arizona companies and bar city employees from traveling to the neighboring state for business.

Politicians in the adjacent Mexican state of Sonora threatened to cut off Arizona’s largest trade partner and the Mexican federal government warned its citizens to be careful while traveling in the state because of the risk of harassment.