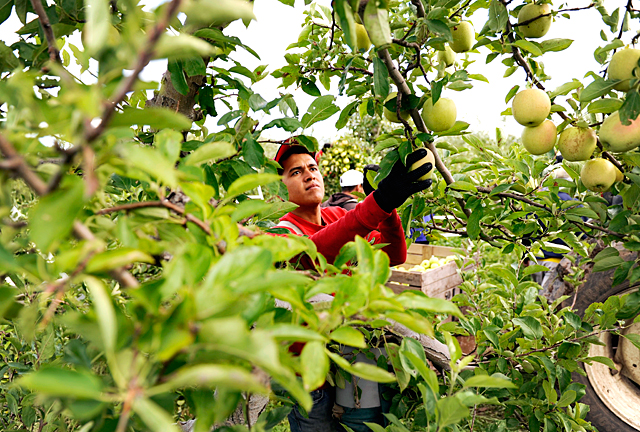 As another growing season quickly approaches, farmers and advocates agree that a continued lack of comprehensive immigration reform doesn’t bode well for the agricultural industry as a whole, and especially in the Finger Lakes region.

They also eagerly await the U.S. Supreme Court’s review of Deferred Action for Parents of Americans (DAPA), which would protect workers from deportation for a certain amount of time as well as offer employment authorization, according to www.uscis.gov/immigrationaction. DAPA was created by President Barack Obama’s executive action in 2015, and the court will decide whether he exceeded presidential power in issuing it.

While the legal action plays out, local farmers said that they are finding themselves hiring more workers through the H-2A program, which allows foreign workers to travel to a specific area for labor that must be "of a temporary (or seasonal) nature" and lasts less than a year, according to information on the U.S. Department of Labor website at

But relying on the H-2A program is not financially viable for farm owners on a long-term basis, noted Ken VanDeWalle, who has owned and operated VanDeWalle Fruit Farm in the Sodus area since the early 1980s following retirement from Eastman Kodak Co. He said that the costs associated with the program are prohibitive and prevent farmers from hiring enough workers.

According to information on the New York labor department website, employers must pay the U.S. Labor Department a $1,000 filing fee. There also is a $325 filing fee for the U.S. Department of Homeland Security. Employers also must prove there are not enough area workers to fill their positions and agree to provide H-2A workers with housing, subsistence, transportation and a "prevailing wage."

Despite these costs, VanDeWalle said that in recent years, due to increased law enforcement presence and raids of area migrant worker camps, he has had no choice but to bring in H-2A workers from Haiti. The majority of his workers previously had been from Mexico, he added.

"Eventually, though, farmers won’t be able to afford people coming in through the H-2A program," he said. "The program is so darn expensive, farms are going to disappear. Years ago, we used to have people come around at this time of year looking for jobs to help the farmers out. That’s a thing of the past now."

The program also doesn’t help the region’s dairy industry, which operates year-round and not seasonally as produce farmers do, said John Noble of Noblehurst Farms in Livingston County.

"The farming economy is probably in a more difficult place than it was a year ago," he said. "It’s a global market. If there is a decline in demand, the problem with milk is we have a product that has to be consumed or made into something within 24 hours."

Both farmers, though, agree that if the Supreme Court allows DAPA to stand, farmers throughout the country would benefit as much as undocumented workers would.

"Good people are suffering because no one is behind them," VanDeWalle remarked.

"For us, it’s a humanitarian issue," Noble added. "Any person comes in the door willing to work, we’re willing to hire, be they local or anyone. But not that many locals are coming to find that kind of work."

VanDeWalle pointed out that if DAPA is not allowed to stand, the resulting negative economic impact would affect not only farmers, but all taxpayers as well, as migrant families might be forced to seek out social services in order to survive.

"Somebody has to do something," he added. "The farming industry would support something that will protect the farm plus the workers."

Neither farmer, however, holds out hope that any kind of meaningful reform will take place even after the next presidential race is decided.

"The problem is that national rhetoric is so negative toward doing anything," Noble said. "Our experience is that these folks that we hire are not necessarily looking to be citizens. They just want to come and (work)."

That has been the experience for Primo Vázquez, whose corner store business in the Sodus area used to cater to these migrant workers. He said that they would save money for their families back home, but they also would shop at his bodega after a week’s work. All that was before immigration raids in recent years, which decimated business when workers could no longer shop at his store due to U.S. Customs and Border Patrol officers parking in front of it, he said.

"They ruined my business," Vázquez said of the police presence.

The influx of additional H-2A workers in the area didn’t help his situation, either, he said, because many of their needs are taken care of by their employers. In addition, most of these workers also save every penny until they return home, he has observed.

He survives now by making grocery deliveries to former customers on their farms, he said.

"When I started, most of my customers, they didn’t have any problem going to the store and buying," Vázquez added. "But when they started employing H-2A people, the business broke down pretty good."

H-2A workers also are able to save more of their wages because they are exempt from U.S. Social Security and Medicare taxes, and they are not subject to withholding of U.S. federal income taxes. On the other hand, many undocumented workers pay into the system using valid Social Security numbers but cannot file tax returns to recoup those because of their status, according to information from the Fiscal Policy Institute.

"Granting lawful permanent residence to all 11.4 million undocumented immigrants and allowing them to work in the United States legally would increase their state and local tax contributions by an estimated $2.2 billion a year," the report states. "Their nationwide effective state and local tax rate would increase to 8.7 percent, which would align their tax contributions with economically similar documented taxpayers. … The top 1 percent of taxpayers pay an average nationwide effective tax rate of just 5.4 percent."

DAPA alone would grant up to 5.2 million people status who would then contribute to the economy through taxes and consumer power, the report found. The executive action also would provide needed workers on farms, thus reducing the need for guest workers, noted Carly Fox with the Worker Justice Center.

While not the solution most activists hope for, she said, DAPA also would greatly help workers like José Coyote of Livingston County, who faces deportation and separation from his U.S.-born children.

"Economically this is going to be huge," Fox said if the court rules that the executive action can stand. "It will reduce the fear factor that happens when people are worried about immigration consequences in the workplace. We’ll have a more empowered workforce, a less vulnerable one. That’s good for the United States."