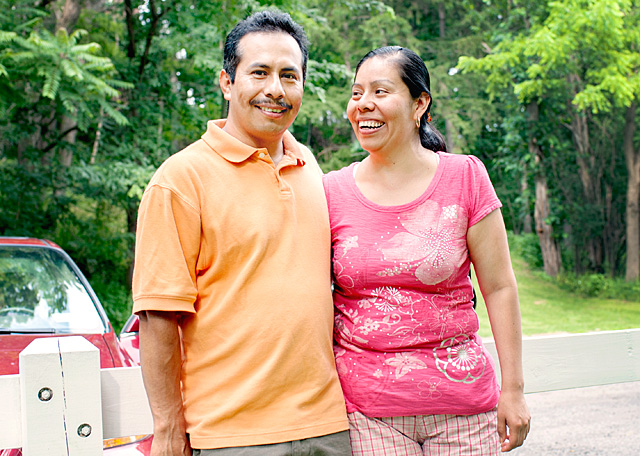 MOUNT MORRIS — A weekend drive through Letchworth State Park recently turned into an immigration nightmare for one migrant family.

José Coyote said that during a May 24 drive with his four children, he was pulled over by park police for driving too close to the curb. The police report, which was obtained by the diocesan Office of Migrant Ministry, states that Coyote was driving without a seat belt.

According to the police report, the arresting officer called in U.S. Border Patrol because of language barriers. Coyote was detained and sent to the Federal Detention Center in Batavia for "violation of entry into the United States without inspection," the police report says.

However, to the surprise of Coyote and of local advocates, he was released on $1,500 bond only a few weeks later.

"I see it now as a miracle from God," he said of his release. "Everything was so different. One day, everything just changed. I was so happy. I went back to work and was able to once again hug my children."

As the country grapples with the crisis of unaccompanied children crossing the Texas-Mexico border, Coyote said that he doesn’t understand why there continues to be inaction on immigration reform.

He added that the federal government should be more concerned with criminals than with families like his who are working to provide a better future for their children..

"I came as a father to work and buy food for my children and give them a better life," he said. "If (the government) doesn’t want to adopt national reform, they should give us the privilege to keep working and let our children become good citizens and good people that help the community."

Coyote’s attorney, Anne Doebler of Buffalo, said that she is filing with Immigration and Customs Enforcement for prosecutorial discretion on his behalf. Prosecutorial discretion would allow Coyote to remain with his family in this country indefinitely, although he would be required to report to immigration officials either in person, by phone or by wearing an ankle bracelet, Doebler explained. She said that his alleged immigration violation works in his favor because it is of a lower priority for the ICE officials than would be the case of someone charged with a felony crime such as drug trafficking.

She agreed with Coyote’s assertion that this type of government action is not the answer to address ongoing immigration issues across the region and across the country.

"It’s like a stop gap," Doebler said of using such measures as prosecutorial discretion to work around current immigration laws. "It’s a Band-Aid because (Congress) can’t get immigration reform done. … As of right now in Buffalo, we are short one immigration judge. My clients wait a year and half for final hearing dates, and that is not unusual. The Department of Justice doesn’t have enough funding for all the judges needed to make the system run more efficiently."

A recent case in Buffalo also highlights the urgent need for reform, local and national advocates say. In that instance, a national civil-rights activist was detained at the Buffalo/Niagara Airport for "flying while undocumented," according to an online petition at http://bit.ly/1sF7WGJ

Rausel Arista was detained by Transportation Security Administration officials on July 21 while trying to fly back to Charlotte, N.C, after visiting friends in Buffalo. He is a father of two children born in the United States, according to Arista’s friend, Liz Beaumont, who works with him at the Latin American Coalition in Charlotte, where Arista is a community organizer.

He has flown many times before with his Mexican passport, Beaumont said.

"But he’s never flown to Buffalo and never will again," she said.

Arista will have to report back to an immigration judge in Buffalo, however, and will request a change of venue to North Carolina, Beaumont explained. He was released July 22 following attention drawn to his case by the online petition and calls for his release from advocates across the country, she added.

"Every state is different in climate and how it treats immigrants," she noted. "But I grew up in New York (state) and I had no idea how bad things are for workers in New York. They have no freedom to travel."

"We’ve been working with local police to really put them on the spot about why they’re setting up checkpoints outside of a park with a soccer field where people speak Spanish and play soccer on Sundays," she said. "That’s targeting people, and it’s unacceptable."

Coyote’s detention also illustrates that law enforcement agencies operate with two sets of rules for different people, asserted Tim McMahon, former director of Catholic Charities of Livingston County. McMahon, who is part of a newly formed group advocating for migrant workers like Coyote, said that following Coyote’s detention, he asked two different police agencies what would ordinarily happen if someone — a non-Hispanic or someone who was not be identified as Hispanic — was stopped for driving without a seat belt and could not produce a license.

"Both responses were identical," he said. "If no other extenuating circumstances, they would issue a summons. The person would come to court and pay a fine. And that would be the end of the episode."

The fact that Coyote’s traffic stop ended differently demonstrates a what advocates nationwide have decried as a "serious blurring of the lines" between local police and Border Patrol, McMahon added. While the police report in Coyote’s case states that a language barrier existed, Coyote said that he spoke to the arresting officer in English and that it was his understanding police were calling in the Border Patrol because he did not have a license.

"They (local police and Border Patrol) have distinctly different missions, and yet, as this case highlights, a decision was made to bring in Border Patrol when that was really unnecessary," McMahon remarked.

Coyote was stopped for driving without a seat belt, as State Park Police conducted a "Buckle Up New York" detail, the park police’s public information officer, Randy Simons, explained in an e-mail. He said that during the stop, Coyote could not produce a driver’s license or identification and a language barrier existed so "a law enforcement entity" was called in to assist, he added.

"State Parks has clarified its policy with all personnel so that in the future either parks staff or State Police are the first line in assisting with language barriers," Simons noted.

Since Coyote’s detention led to reinstatement of a prior removal order, he will not come before an immigration judge, said Doebler. However, she said that she does give credit to the Immigration and Customs Enforcement officer at the Batavia Center who found an error in Coyote’s original removal order from 2008. The officer found that he had followed the voluntary departure order and that Coyote’s records were incorrect. Although the removal order had been reinstated, identifying this error will help with her application for prosecutorial discretion, she said.

Doebler said that she is focused on Coyote’s application for prosecutorial discretion, so for the time being, she will not pursue any issues related to the traffic stop.

"But I always have an issue with local police calling Border Patrol for language services," she said. "Law enforcement agencies should have a contract with a language service company (for interpretation needs). There is no reason to call another police agency for interpreters. That always sounds (suspicious)."

Coyote has lived in the area for 14 years, and his four children are enrolled in the Mount Morris school district. He said that he has received reference letters from his employer and other community members as part of his prosecutorial discretion application.

Meanwhile, McMahon and Carly Fox of the Worker Justice Center noted that Coyote’s case helps to put a "human face" on this very complex issue and shows how his family now forms part of the fabric of his community.

Congress’ inaction on immigration reform helps no one, Fox said. Although she said immigrants should have the opportunity to find work here, she noted that many don’t want to stay in the United States, she added.

"If someone is in this country working … they should enjoy the benefits that come with that, (including) education for your children, health care," Fox said. "Let’s create an immigration policy that keeps families together."

McMahon and Fox, along with diocesan migrant minister Penny Gardner and other local supporters have formed an advocacy group to inform the community and respond quickly with support, such as organizing petitions or protests if and when other migrant workers find themselves in situation such as Coyote’s, McMahon said.

"Too often when we hear about, say, three workers picked up in Orleans County, for a few seconds we’ll say, ‘Too bad. We need to do something about reforming immigration in this country.’ Then go on with our lives," he said. "This guy is working hard, married, with four kids who are U.S. citizens. … Hopefully (his case) will lead to some movement (on immigration reform)."

EDITOR’S NOTE: For more information on the newly formed advocacy group, contact Carly Fox at the Worker Justice Center at 585-325-3050.