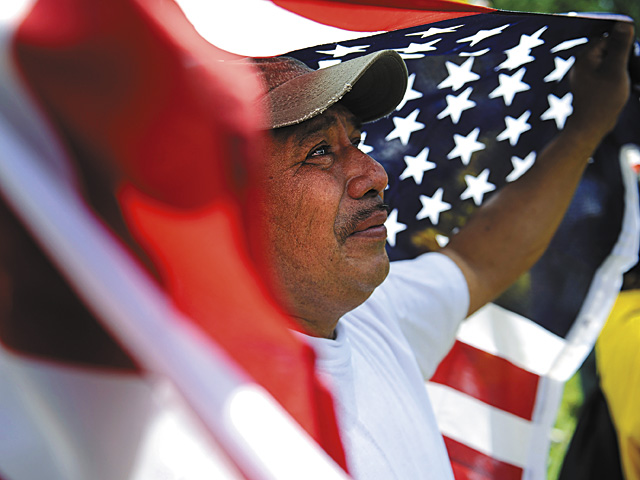 Amilcar Ramirez weeps as he holds a U.S. flag at a May Day rally in Washington May 1. Demonstrators at rallies across the nation criticized Arizona's new immigration law which makes it a state crime to be in the United States illegally. (CNS photo/Jonathan Ernst, Reuters) (May 3, 2010) See IMMIGRATION-RALLIES May 3, 2010.

EDITOR’S NOTE: The last names of some people interviewed for this story were withheld in order to protect their privacy

ROCHESTER — Members of a newly formed immigrant advocacy group gathered last month to discuss ramping up their efforts on behalf of young undocumented workers in light of the presidential election.

Due to President-elect Donald Trump’s campaign promises to rescind immigration policies issued by President Barack Obama, the new Referral Center for Immigration Rights is focusing on helping local immigrants who were given a stay of potential deportation through the Deferred Action for Childhood Arrivals policy. Obama first issued the DACA policy in 2012.

Mercedez Vázquez, who is heading up the group, said it formed last year after one of the members, Carlos Rodríguez, spent time in Artisan, Texas, and saw families being separated because of a lack of congressional action on immigration. Rodríguez is an attorney and is now offering legal assistance to individuals who approach the group for help.

Recently, the group sent out e-mails to local college students who could be affected if DACA is eliminated by the new presidential administration and also made a presentation to families in the Rochester City School District who could be affected, she told El Mensajero Católico on Nov. 18. And the group has received calls from students and families, she said.

"We want to link them up with Carlos to work on their applications" for DACA renewals if they qualify, Vázquez said. "There is a sense of urgency."

The urgency stems from a fear of the unknown regarding DACA, group members said.

On its website (http://bit.ly/2f9MlW7), the National Immigration Law Center has laid out two possible scenarios for what action the new presidential administration could take regarding DACA:

* Rescind the memo authorizing DACA and allow previously issued DACA and work permits to remain valid until they expire. No new applications for first-time DACA or DACA renewal would be accepted.

* Rescind the memo authorizing DACA and immediately invalidate all DACA and work permits.

"The issue with DACA is that it is not law," noted Wedade Abdallah, director of the immigration program at the Legal Aid Society of Rochester. "It is a policy. … We want people to have the ability to work and stay in the United States, but there’s no reform, no congressional act, only a directive by the Obama administration."

Although her office is not experiencing an increase in requests for legal assistance, it has seen an uptick in anxiety on the part of individuals and advocates working on behalf of immigrants, she said. Legal Aid has three attorneys, an advocate and other assistants currently working on cases.

"We’re helping people we can," Abdallah said. "Our duty as attorneys is to advise people on the risk and benefits of any application to immigration."

While the local referral group is only focused on DACA renewals, she said Legal Aid is looking at every case on an individual basis. The National Immigration Law Center advises against filing new DACA applications.

Through the DACA program, more than 700,000 young immigrants, also called DREAMers, were granted deferred action of potential expulsion from this country for a period of two years and were authorized to work or study, according to the law center. An expanded DACA program was denied when the U.S. Supreme Court deadlocked 4-4 last June in its United States v. Texas decision, according to a July 2016 El Mensajero Católico article. The expansion would have eliminated the original program’s upper age limit of 31 as of June 2012 and moved up the date by which a minor must have arrived in the United States, which is currently age 16 or younger, according to information from the U.S. Citizenship and Immigration Services (http://bit.ly/1TESxTB).

Griselda, who asked that her last name not be used, is one of those DREAMers. The 24-year-old Sodus resident moved to the United States with her parents from Mexico when she was 5. She has lived most of her life in the Wayne County area.

She received her DACA status in 2012 and recently filed her application for a second renewal, she told El Mensajero Católico on Dec. 1.

"I received a text message that they (immigration officials) received it," Griselda said. "They didn’t give me any more information."

While she anxiously awaits an answer, Griselda said she is about to start a new job at the local Motts plant. Her husband, Antonio, is working at a dairy farm while under supervision of U.S. Immigration and Customs Enforcement officials and faces deportation, she said. The couple has two children, who will turn 7 and 2 this month.

She also has several friends who also have filed their DACA renewals and are waiting to see what immigration action the new president will take, she said.

"We’re all nervous," she remarked.

Immigration officials "have our information now," Griselda added. "They know we exist. … We are scared that he (Trump) might do what he actually said (and deport people)."

Many in the migrant community think the new president will eliminate DACA totally, Rodríguez noted. He is working with a family in Geneva, Ontario County, whose 11-year-old son fears he will be sent back to El Salvador, he noted.

Whatever happens with DACA, New York state officials have been among state leaders from around the country who have publicly declared they will become or remain sanctuary states for undocumented workers, noted Dr. John "Lory" Ghertner. The longtime immigrant rights’ advocate is working with more than 35 area high-school students and several young people on their DACA renewals with assistance from Legal Aid attorneys, he said.

He hopes that several of the students for whom DACA renewals were filed months ago will receive approvals soon.

"I don’t think things could change that quickly," he said. "But you never know."