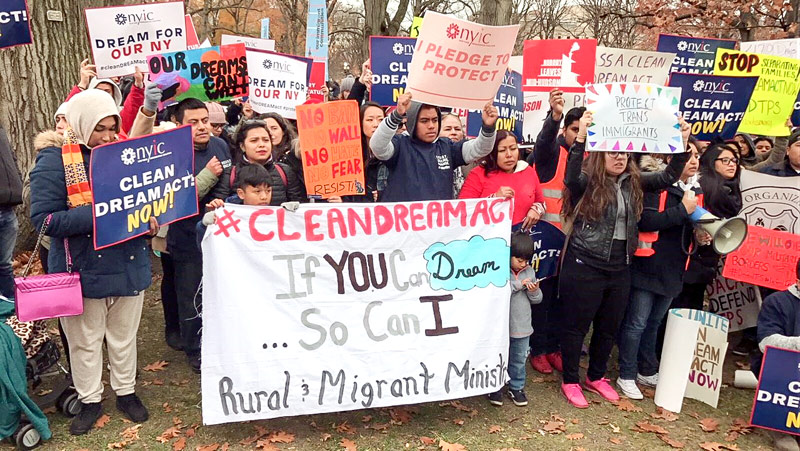 Irving Rodríguez, a 14-year-old a high-school student in Livingston County, did not have a chance to apply for legal protection under the Deferred Action for Childhood Arrivals (DACA) program before President Donald Trump announced a phase out of the program Sept. 5.

Irving needed to be 15 in order to qualify for DACA, which protected young immigrants like him who as children had arrived in the United States illegally with their families, he said.

Irving and his family were among the thousands of people who marched on Washington, D.C., Dec. 6 to urge congressional leaders to pass a bill to protect all young immigrants. He boarded a bus with his mother, Blanca Rodríguez, and his two younger brothers, ages 4 and 8, to take part in the daylong rally along with other families and allies from the Worker Justice Center of New York as well as other local advocates.

“It was a good experience, hearing other people’s stories and how they overcame stuff,” Irving said. “It’s difficult for me, certain things I can’t do because of the fact that my status I guess is different from others. I kind of feel excluded at some points, like there’s certain trips out of the country at school. I can’t be involved in those.”

Irving said expanding the age eligibility criteria for youths like him who didn’t qualify for DACA would help him and other immigrants, which is why he decided to take part in the national rally. His mother said it touched her heart to see so many young people like her children fighting to make their dreams come true for themselves and their families by being able to stay in the United States and work or go to college.

“It gives you the strength to keep on fighting, and we remain hopeful that one day, things will change, and my son, like all these young people, will be able to go to the university, work and contribute to this great country that they feel as their own,” said Blanca Rodriguez. “They deserve the opportunity because they are the future of this country.”

“It was about time” for immigrants to unite, he said. “It’s important that we come together to fight for a better life and work together so the (students’) dreams can come true, like becoming a doctor.”

Workers like himself contribute to the country and also dream of a better future, Martínez said. Workers need to stand up and become more involved in calling for more rights, he added, such as being able to obtain driver’s licenses.

“It’s important that we raise our voices,” he said. “What we are fighting for isn’t something personal but a social movement to help all immigrants and workers that live in this country.”

Currently, a bipartisan bill is in committee in both houses of Congress that aims to provide the protection Irving, Martínez and other rally participants seek. The 2017 Development, Relief, and Education for Alien Minors (DREAM) Act would be a permanent solution and would provide a path to citizenship for more than 2.1 million immigrant youths and young adults — including 800,000 with DACA status who have been in limbo since the program’s termination, according to information from the National Immigration Law Center (http://bit.ly/2AtDl9p).

The DREAM Act would apply to immigrants who entered the U.S. before age 18, have lived in the U.S. for four years and can pass a background check, according to the law center. Qualifying applicants could apply for a conditional permanent residence status. Under this status, they would have to work, join the military, earn a higher-education degree or meet a hardship exception. After eight years, these immigrants would obtain lawful permanent resident (LPR) status. They could then apply for citizenship after an additional five years of LPR status, and DACA recipients would be on a faster track to citizenship.

But the DREAM Act also comes with some strings attached, explained Carly Fox from the Worker Justice Center. She said that opponents of the bill require that certain conditions be met in exchange for their votes, such as funding for a wall along the Mexican border and increased funds for border enforcement.

Immigrants’ rights advocates also worry about other conditions that have been proposed, Fox added. For example, one proposal would increase from two to seven years the potential jail time for those who are charged with the federal crime of illegally re-entering the U.S. after being removed, she said. And another, she added, would increase the number of guestworker programs that could potentially take away jobs from workers who have long-established ties to this country but are without legal status.

According to the National Immigration Law Center, the DREAM Act bill should not be a pawn for increased funding for targeted raid operations or the building of more detention centers. And that’s why participants in the Dec. 6 rally support a “Clean DREAM Act,” Fox said, noting that young undocumented immigrants “won’t be used as a bargaining chip.”