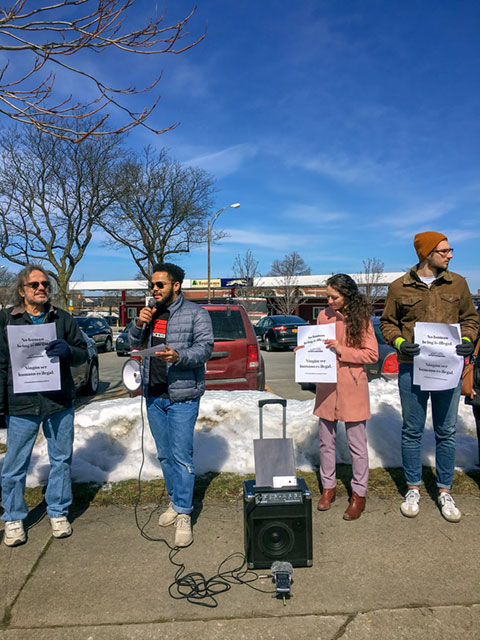 ROCHESTER — Local advocates for immigrants are joining with the American Civil Liberties Union to call on bus companies to protect their passengers by ceasing to cooperate with officers of U.S. Customs and Border Protection (CBP).

Members of the Rochester Rapid Response Network (RRRN), the Worker Justice Center of New York, the UR Dreamers and other members of the community held a protest March 22 to raise awareness of the ACLU action aimed at ending the companies’ practice of allowing CBP officers to board buses and question passengers.

The protesters referenced a letter the ACLU sent to national representatives of Greyhound Lines regarding the company’s practice of permitting CPB agents to board its buses to inquire about passengers’ citizenship and immigration status. According to the letter — which the ACLU sent on behalf of its affiliates in California, Washington, Vermont, New York, New Hampshire, Michigan, Florida, Maine, Texas and Arizona — this practice has led to passenger arrests.

“Greyhound’s cooperation with CBP is unnecessarily facilitating the violation of its passengers’ rights,” the ACLU letter states.

Iman Abid, a lawyer with the Rochester chapter of the New York Civil Liberties Union, noted that bus companies have a Fourth Amendment right to deny entry to the buses if officers do not have warrants.

“We hope racial profiling is never justified or validated in any way,” she said.

Abid was one of about 25 community members who took part in the March 22 protest on Rochester’s Cumberland Street in front of the New York Trailways bus station, which is used by Greyhound buses. During the protest, Sara Curtis of RRRN read a letter to Greyhound from her network and UR Dreamers. RRRN works to protect and defend local immigrants, Curtis said, while UR Dreamers represents undocumented University of Rochester students and their supporters.

“We have learned of accounts by witnesses of the Border Patrol racially profiling, harassing, and targeting people of color and people who speak languages other than English at the downtown Rochester Greyhound/Trailways bus station, and we are deeply concerned,” the letter stated. “Bus and train tickets in the hands of passengers of color should not be treated as invitations for racial profiling and harassment, nor should they be turned into one-way tickets to detentions and deportations. This must end.”

Jack Barker, a Trailways vice president who oversees the Rochester station, accepted RRRN’s letter from Abid and Carly Fox of the Worker Justice Center. According to Anne Noonan, Adirondack Trailways’ vice president for marketing, Barker forwarded the letter to Greyhound.

The letter listed several local incidents involving Border Patrol, including one in which a husband and wife from Mexico, both 64, were on their way to visit a relative when they were taken into custody and transported to the Buffalo Federal Detention Center in Batavia. They were released weeks later on March 12, Fox said.

“We are aware that routine transportation checks not only affect our operations, but our customers’ travel experience and will continue to do everything legally possible to minimize any negative experiences,” Greyhound spokeswoman Crystal Booker said in an e-mail to El Mensajero Católico. “Greyhound has opened a dialogue with the Border Patrol to see if there is anything that can be done to balance the enforcement of federal law with the dignity and privacy of our valued customers.”

However, Booker contended that, due to Rochester’s proximity to the U.S. border, the company is required to allow CPB officers on their buses in compliance with federal law.

Trailways policy also has been to cooperate with Border Patrol and all other law-enforcement agencies, Noonan said.

In an e-mail to El Mensajero Católico, Border Patrol spokesman David Long confirmed that agents have broad law enforcement authorities in regard to transportation.

According to Long, the Immigration and Nationality Act 287(a)(3) and the U.S. Code state that immigration officers, without a warrant, may “within a reasonable distance from any external boundary of the United States … board and search for aliens in any vessel within the territorial waters of the United States and any rail car, aircraft, conveyance, or vehicle. 8 CFR 287 (a)(1) defines reasonable distance as 100 air miles from the border.”

“They (Border Patrol agents) have the authority to question individuals, make arrests, and take and consider evidence,” Long said in his e-mail. “For decades, the U.S. Border Patrol has been performing enforcement actions away from the immediate border in direct support of border enforcement efforts and as a means of preventing trafficking, smuggling and other criminal organizations from exploiting our public and private transportation infrastructure to travel to the interior of the United States. These operations serve as a vital component of the U.S. Border Patrol’s national security efforts.”