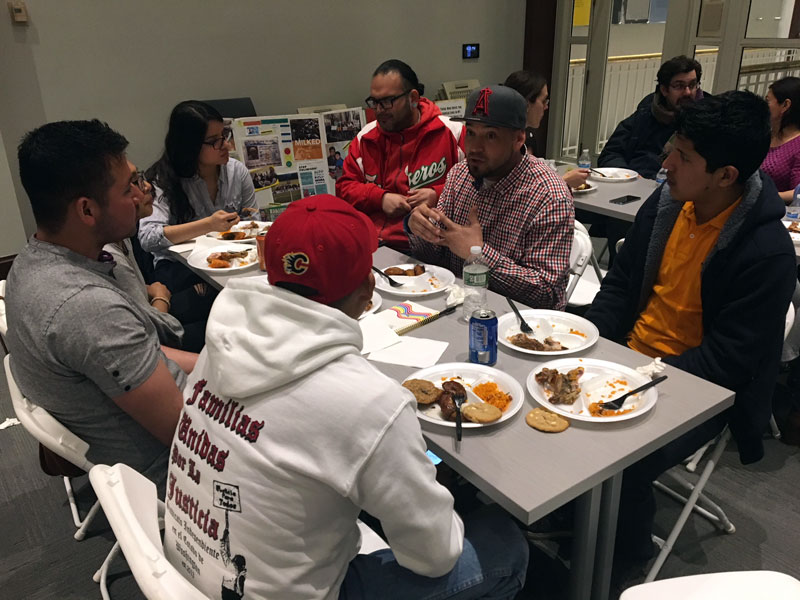 ROCHESTER — Almadelia Salinas Gúzman is not used to getting up in front of a crowd and sharing her story.

But telling her story as an undocumented immigrant is what the 17-year-old high school-student has been doing since joining Alianza Agricola (Agricultural Alliance), which is based in Geneseo and led by migrant workers, she said during a March 26 roundtable discussion at the University of Rochester’s Simon School of Business.

The discussion was organized in collaboration with the Worker Justice Center of New York as part of a tour of the region for Familias Unidas por la Justicia, a Washington-state based workers’ union led by farmworkers from Mexico. The union leaders met with farmworkers individually and also spoke at Cornell University.

“Alianza Agricola has been helping us to come out of the shadows,” said Almadelia, who has Deferred Action for Childhood Arrivals (DACA) status.

Talking during alliance gatherings about her journey as one of seven siblings whose father and two brothers work as dairy farmers helps others understand the immigrant experience, Almadelia said. For example, she often has to serve as the family translator, she said.

Her voice trembled as she explained that standing in solidarity with other migrant families through the alliance was better than doing nothing but worry about what will happen to DACA, whose future has been debated in Congress since President Donald Trump ordered a phase-out the program last fall. Her hope is to go to a university like the one in which the discussion was being held, she added.

Until federal officials decide her fate with DACA, she will work to educate workers and the community about the alliance’s campaign for the state to issue driver’s licenses to undocumented immigrants.

Empowering migrant workers like Almadelia’s family to advocate for themselves has been the mission for Familias Unidas, Edgar Franks, its development director, explained during the March 26 roundtable. He said the region Familias Unidas represents is similar to Rochester in that it is located near the Canadian border. The union of indigenous families that formed in 2013 is located in Burlington, Wash., and represents about 500 Spanish-speaking workers to demand better wages and working conditions, according to information at familiasuidasjusticia.org.

“We’re not there just to drive the economy,” he said. “We’re there to build a better community.”

The farmworker movement includes several components; it also is connected to labor rights, immigrant rights and the environmental impact of farming, Franks said. He noted that farmworkers are excluded from such worker protections as a day of rest and no child labor.

The union’s work also includes advocacy for improving workplace conditions and fair wages, added Ramón Torres, president of Familias Unidas. After creating the union, it took almost four years to negotiate with local growers and agree on a labor contract, he said. These farmworkers now earn between $17 and $27 an hour, Torres said. The workers also are establishing cooperatives where they can be their own bosses as well as employ workers who have been injured on the job and left with no compensation, he added.

He encouraged the students and community members in the audience to not only stand in solidarity with local workers but to reach out to them and volunteer to help with translation or driving them to medical appointments or to go shopping.

“We are in the struggle together,” he said.