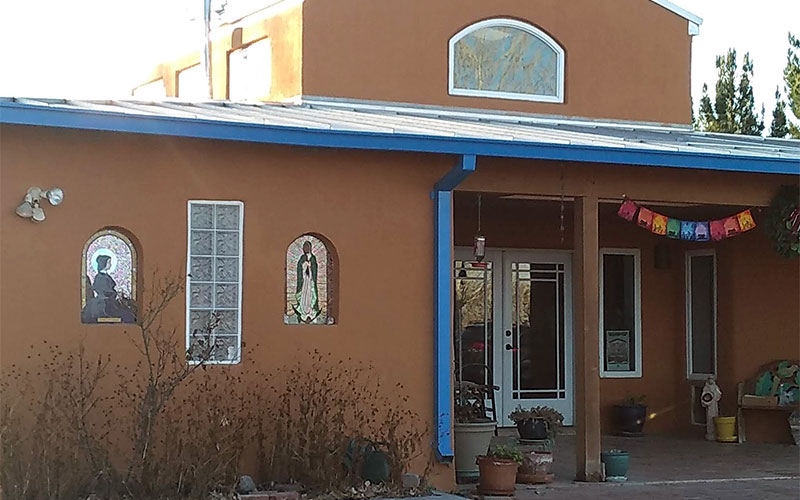 Sister Donna Del Santo stayed with the Sisters of Charity in during a December trip to the US-Mexico border.

Four local women recently got a glimpse into the lives of immigrants at the center of the current national debate over the situation at the United States’ southern border.

Three women religious — Sisters of St. Joseph Donna Del Santo and Phyllis Tierney and Sister of Mercy Janet Korn — and local attorney Ellen Tomasso traveled to the border to volunteer their time and talents in service of those seeking asylum in the U.S.

The three women religious traveled down south separately — Sister Del Santo in late December and Sisters Tierney and Korn in mid-January — to assist men, women and children who entered the country through the border crossing in El Paso. Tomasso traveled to Karnes City, Texas, to help asylum seekers in a men’s detention facility prepare for the interviews that will determine whether they will be allowed to remain in the United States even temporarily. All four women shared their experiences during a Feb. 21 presentation at Church of the Assumption in Fairport.

“For me it was a way just to be with the people of God,” Sister Del Santo explained to the more than 50 people gathered for the presentation. “I just couldn’t imagine what their lives must be like, and coming from immigrant grandparents who fled their countries, it was an experience that I felt the need to respond to.”

More than 350 people from the Central American countries of El Salvador, Honduras, Nicaragua, Belize and Guatemala come through the border crossing at El Paso each day, Sister Del Santo said.

“They’re coming in legally. When they come across they literally get all of their possessions, all of their identification, taken from them. They have an ankle bracelet applied and they’re given material for a court date,” she explained.

This process can take anywhere from three to 11 days, and during this time the men, women and children are held in federal detention centers. Once they have their court dates, they are released, and Immigration and Customs Enforcement officials deliver them via bus to one of several shelters set up throughout El Paso.

“Immigration and Customs Enforcement would come every day with a bus of people, leave them off and they’d all line up, and we’d say, ‘Welcome. Bienvenida,” and they’d all smile. I think they knew they were safe,” Sister Korn recalled.

Those smiles may have been the first in a long time for these people, who don’t stay at the shelters long. As soon as they arrive at the shelters, volunteers such as the women religious make phone calls to the individuals’ families or contacts already living in the United States. These contacts then send tickets for the asylum seekers to travel to them via bus, plane or train, usually within the next 48 hours, Sister Del Santo said.

During the asylum-seekers’ brief stays at shelters, volunteers provide them with food, a place to sleep — usually a cot on the floor — and some fresh clothing, since the immigrants have traveled with nothing but the clothes on their backs and sometimes a small bag of food. Volunteers send them on their way with small bags of such necessities as toothpaste and toothbrushes, as well as some snacks for their journey. The immigrants were incredibly grateful, Sister Tierney said.

“Everything was gracias a dios, thanks be to God,” Sister Del Santo added. “I can’t image the kind of gratitude that they had in the midst of so much plight.”

The people making the treacherous journey from Central America to El Paso are doing so in an attempt to get away from horrific violence in their own countries, Sister Tierney said.

“They love their country, and if they had their choice, they’d stay in their own country with their families, but they can’t,” she added.

The immigrants’ reasons for leaving their own countries are compelling and disturbing, agreed Tomasso, who volunteered at the Karnes County Residential Center through the nonprofit Refugee and Immigrant Center for Education and Legal Services. She helped the men prepare for what’s known as a “credible threat interview,” during which the men explain to federal officials why they needed to leave their own countries.

“They were all fleeing violence. They just wanted to get away from these terrible situations, and they weren’t all going to be successful,” Tomasso said. “We might have been the first ones they told their stories to. We helped them not to get distracted OVERSET FOLLOWS:by nonessential details.”

It was both humbling and “other worldly” to hear about experiences so vastly different from those of her own life, Tomasso said. Sister Korn said she was moved by the large numbers of people willing to volunteer their time to care for others.

“We can’t underestimate the goodness of people,” she remarked.

“We hear so much hate speech, and we really do need to hear about people of goodwill, because there are many,” Sister Tierney noted.