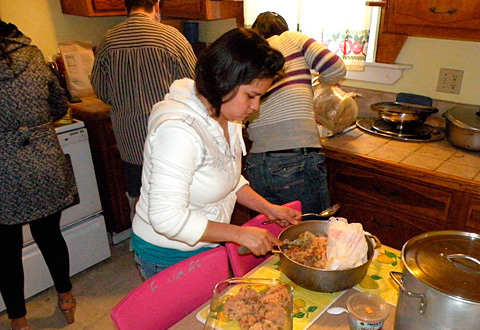 SODUS — Maria Elena López’s voice wavered as she spoke of her children.

While she and her husband work at an area dairy farm, her 13-year-old daughter and 10-year-old son are being raised in Mexico by an aunt. The ache in her heart is constant, she said.

"The journey is difficult … and very painful," López said. "But it’s a sacrifice we had to make. … We had no choice but to come (to this country) to make a better life, a dignified life."

López was one of several farmworker women who spoke Jan. 12 at La Casa, a migrant-housing center. They talked about their lives during an event that is part of a transnational effort called "Cien Cenas" (100 Dinners).

Staff and supporters of the Centro de los Derechos del Migrante (Center for Migrant Rights) began hosting Cien Cenas in the United States and Mexico several years ago, explained Monica Ramírez, the center’s acting deputy director. The primary goal of the dinners is to honor the workers who have lost their lives by crossing the border from Mexico into the United States, she added.

"The jobs migrant workers are employed in are among the most dangerous in our country," noted Ramírez, who works at the center’s U.S. office in Baltimore. "Basically, we wanted to raise awareness of the workers coming to the U.S. kind of searching for the American dream. But then, they get here, experience workplace injuries … and their injuries go unreported."

The Sodus dinner also served as a fundraiser to benefit the center and the recently formed Alianza Nacional de Campesinas (National Alliance for Farmworker Women), explained Alina Díaz, a founding member of Alianza who coordinated the dinner at La Casa.

In addition to honoring the workers who were invited, she invited friends and staff from other local organizations to personally hear stories of the plight of area farmworker women as well as recognize their valuable contributions, Díaz said.

Migrant women are the focus of this year’s Cien Cenas; another facet of the center’s mission is to raise awareness about different segments of the migrant population, noted Ramírez, who also is a board member for Alianza.

Díaz said that she also sought to inform more people about the center’s work, which prepares workers in Mexico for what they will encounter once they cross into the United States. The many challenges include law enforcement harassment, environmental dangers, mental and physical intimidation, discrimination and sexual abuse, she said.

"They prepare the immigrant before he starts his journey," Díaz said.

The Center for Migrant Rights, which is based in Mexico City, Mexico, also strives to empower migrant workers to help prevent the abuses Díaz talked of as they move between their communities in Mexico and their workplaces in the United States, according to information from Ramírez.

The center’s offerings include:

* providing pre-departure "Know-Your-Rights" training sessions to workers in Mexico, with more than 6,000 workers trained so far;

* assessing and referring cases of abuse to legal advocates and lawyers.

Migrant women have experienced emotional and physical forms of abuse, including sexual violence, Ramírez explained. And if they are victims of domestic violence, they also may be forced to work alongside their husbands, she said. In one case that Ramírez worked on, the grower bailed out a husband after he was arrested for hitting his wife, she added.

Ramírez also knows of cases where women were barred from bathroom breaks because supervisors felt such breaks take longer than for men, she said. Compounded with few water breaks during those shifts, these women also may suffer kidney problems and urinary-tract infections, Ramírez added.

"There are a number of ways women are uniquely impacted," she said.

Although López said that she is fortunate to have decent working conditions, the days are very long and she often has felt isolated.

"Sometimes, we feel like we are totally alone," she added. "So, it feels good to know there are people out there like Alina who support us. … She is opening doors for us."

She said that she doesn’t know what she would have done without the support of people like Díaz. Through that support, López and several other area farmworker women have joined with Díaz to become members of Alianza and fight for the rights they deserve.

"We have endured so much … to get to this country," said Patricia Reyes of Oaxaca, Mexico. "(Now) a woman’s voice is being heard … as she has the right to be heard."

Díaz and the Alianza have helped farmworker women see that a better future is possible, López added.

"Those who persevere reach their dreams," she said.

To reach the ultimate dream of comprehensive immigration reform — which President Barack Obama brought back to the national spotlight in his inauguration speech — Díaz will move to Washington, D.C., to provide advocacy through Alianza.

"In my dreams, I don’t have this job anymore. My phone doesn’t ring. I don’t see any more tears," Díaz remarked. "That day I will say, "My God, finally.’ Until that day, we must continue the struggle. At times, it seems we won’t win. But the worst … is to do nothing."

EDITOR’S NOTE: For more information on the Center for Migrant Rights, visit www.cdmigrante.org.