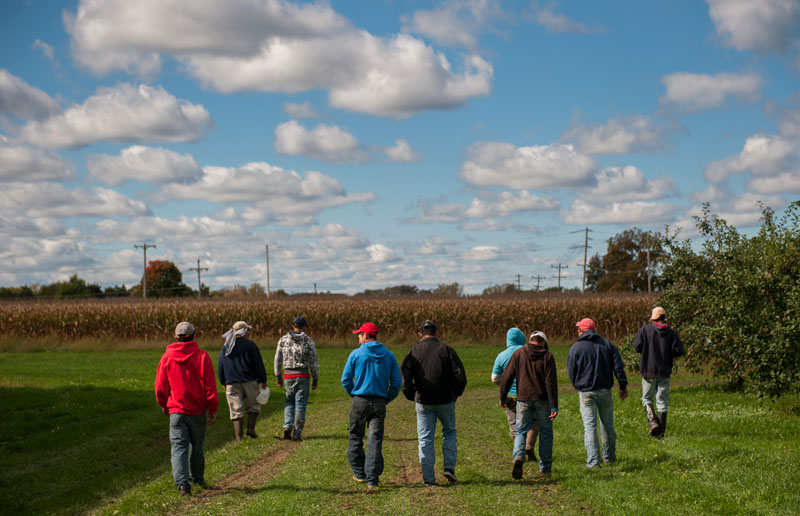 A group of workers from Heberle Farms in Kendall, all of who hail from the Mexican state of Michoacán, talk to one another as they head into the orchard to start picking Oct. 8, 2013.

“This is an unusual year.”

Those are the words diocesan Catholic Charities Director Jack Balinsky used to describe the Diocese of Rochester’s 2019 public-policy agenda in the context of a state legislative climate markedly different from those of recent years.

The state’s 2019 legislative session started off with a bang, and by the end of January lawmakers already had passed the Child Victims Act and the Reproductive Health Act. Action against the Reproductive Health Act had been an education priority on the 2018 diocesan public-policy agenda, and both legislative items had been stalled in the Republican-controlled state Senate for more than a decade. November’s midterm elections gave Democratic majorities control of both houses of the Legislature for the first time in several years, which allowed both long-stalled bills to pass this year.

The shift to Democratic control of the state Legislature also increases the likelihood of action on the Farmworker Fair Labor Practices Act, which is why the Diocesan Public Policy Committee elected to make that issue the focus of a petition-signing campaign. During the month of February, parishioners will be asked to sign petitions in support of the bill, which would grant farmworkers equal treatment as other workers under the state’s labor laws.

This bill has been on the Diocesan Public Policy Committee’s radar for 15 years, said Balinsky, noting that Wayne County is home to the largest group of migrant farmworkers in the state. Under New York state’s current labor law, these workers do not have the right to overtime pay, disability insurance, one guaranteed day of rest per week or protections while bargaining collectively, according to the public-policy committee.

Balinsky said the language of the Farmworker Fair Labor Practices Act is good because it is fair to farmers as well as farmworkers. Both farmworkers and farmers represent important constituencies within the local Catholic Church, and the Diocesan Public Policy Committee tries hard to build bridges between these groups rather than reinforce polarization, he added.

Petitions signed at parishes during the month of February will be gathered by Catholic Charities’ justice and peace staff, sorted and delivered to the appropriate legislative representatives, a task Balinsky called “monumental.”

The Diocesan Public Policy Committee also has identified two education priorities for this year in response to the opioid crisis and to Pope Francis’ call to “Share the Journey: Love Your Neighbor.” Both topics also were education priorities on last year’s agenda, Balinsky said.

“Share the Journey: Love Your Neighbor” is the title of a global campaign, launched by the pope in 2017, that seeks to support migrants and refugees. In a similar vein, members of the public-policy committee also are encouraging parishioners to address the sin of racism in this country and heed the words of the U.S. Conference of Catholic Bishops in their 2018 pastoral letter “Open Wide Our Hearts: The Enduring Call To Love.”

The public-policy committee is working with the diocesan Department of Pastoral Services and several other groups to plan a two-day conference addressing racism. Sisters Patricia Chappell and Anne Louise Nadeau, executive director and program director, respectively, of Pax Christi USA, will present at the conference, which will take place April 12-13 at St. Bernard’s School of Theology and Ministry.

“The other education issue is we’re looking to better advocate for more funding for prevention and treatment of alcohol and substance abuse, particularly opioid addiction, but we are also encouraging parishes to do educational sessions within the parish community,” Balinsky said.

In addition to these advocacy and education priorities, members of the public-policy committee continue to monitor developments related to such justice issues as education tax credits, federal immigration reform, access to mental-health care, child-care subsidies for low-income working families, and war and nonviolence.