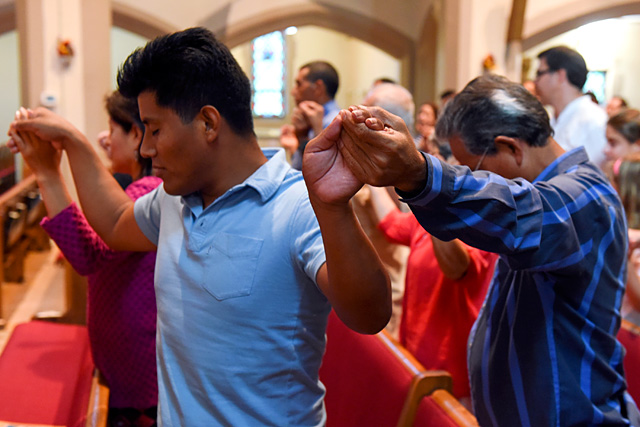 BROCKPORT — During Mass last month at Nativity of the Blessed Virgin Mary Church, a group of men sat together in the back half of the pews.

After Mass, the men — migrant workers from Tlaxcala, Mexico — expressed gratitude for being invited to attend the bienvenida, a welcoming celebration for the migrant community that returned to Brockport last fall after a five-year hiatus.

Every year for 17 years, the men have traveled to Brockport to work at Martin’s Farms, he added. They appreciated not only the welcoming itself but also the opportunity it provided them to educate the community at large about their contributions, added Angel Rivera.

"So, (the community) knows the sacrifice we make and pays attention to how food reaches their homes," Rivera said.

More than 100 people attended the welcoming Mass, which was followed by a celebration attended by about 250 people at nearby Haffner Park. Activities included a soccer match between migrant workers from area farms, a parish picnic with traditional Mexican and American food, and folkloric dance.

Lucia Ricos-Garcia (left) and her sister, Maria, attend Mass at Nativity of the Blessed Virgin Mary Parish in Brockport Sept. 11. The Mass was part of a bienvenida celebration to welcome migrant workers to the area.

The tradition, which had been held at the beginning of the harvest season for three decades, was cancelled five years ago because attendance had waned due to lack of transportation, conflicts with soccer matches, a need to work and fear of being detained by federal immigration officials, BEOC members had said in 2011. The event was renewed in 2015, Salgado noted.

Since some workers arrive later in the harvest season around mid-August and stay until December, Salgado said organizers decided to move bienvenida to the fall when more workers could attend.

Salgado let workers know about the welcoming during visits to the migrant camps at area farms. Such visits also include Mass and Bible study when he is accompanied by local priests, including Father Joseph McCaffrey, pastor of Nativity, and Father Jesús Flores, diocesan coordinator of migrant ministry. Father McCaffrey also celebrated the Sept. 11 welcoming Mass.

"It’s important that the (local) community be aware of their presence and that they feel welcomed," Salgado said of the migrant workers. "Their work is not only difficult. Their work is hidden. We buy food and produce because of the work done by people who work under the hot sun … for us."

The community needs to recognize that they work hard for the betterment of the entire community, added Alicia Jacobo, a Nativity parishioner who has lived in the Brockport area for 23 years. Jacobo also helped bring back the welcoming celebration.

"We can be the bridge" between communities, such as the workers and Brockport residents, Jacobo added.

To help bridge the gap between urban and rural populations, Father Laurence Tracy also brought a group of parishioners from St. Michael Church, part of St. Frances Xavier Cabrini Parish, to the welcoming Mass and festivities.

Gloria Sabastro of Rochester said she was happy to get to know this neighboring community and let migrant workers know how much she appreciates them.

"It is our duty as good citizens to support them," she said.